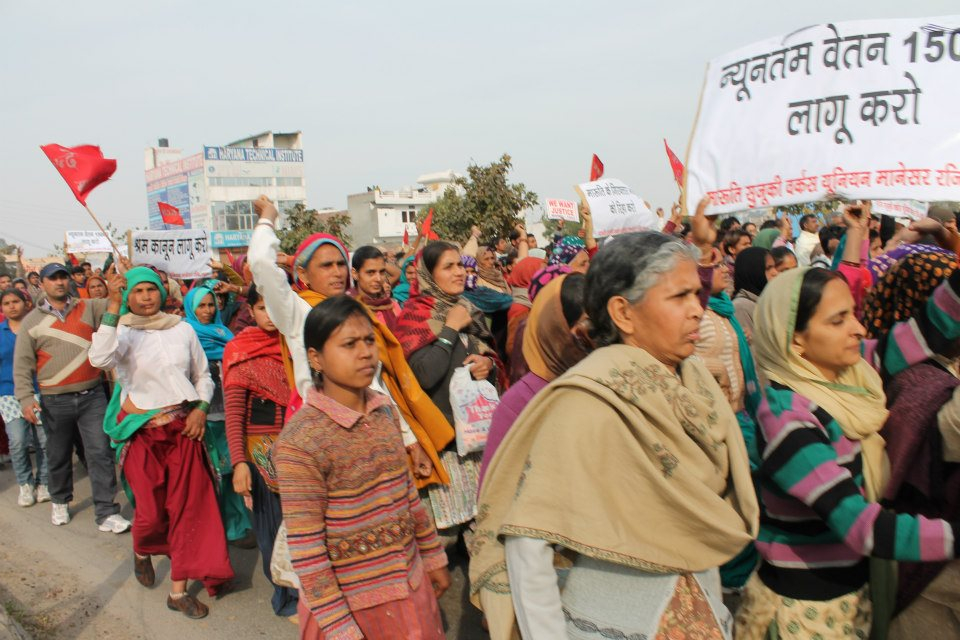 Auto workers launched a hunger strike in Manesar, India, today to demand the release of 147 co-workers, who have now spent a year in jail on trumped-up charges. Workers and allies have protested all year, including this January march in the state of Haryana. Photo: Suzanne Adely.

If Bangladesh represents the worst of exploitation in clothing factories, India is home to the most rapacious conditions for auto workers.

Auto workers and community and union supporters in Manesar, India, launched an indefinite dharna (sit-in and hunger strike) today, demanding the release of their imprisoned co-workers. A staggering 147 workers have spent a whole year in prison on trumped-up criminal charges, after a company-provoked altercation led to the death of a human resources manager who supported the union. Hundreds have pledged to participate in the dharna.

But the government announced that it is barring public assembly anywhere in Manesar. It has created a militarized perimeter in the city and especially around the factory. Two thousand people showed up for a rally today, despite the restriction, but they were surrounded by battalions of police. This in "the world's largest democracy."

Workers and community members are marking the one-year anniversary of an attack on auto workers by company security forces with active support of the state police.

Maruti Suzuki’s modern assembly line in Manesar is one of two plants in the Gurgaon industrial belt, 25 miles southwest of New Delhi. Maruti Suzuki India Ltd. is India’s largest auto manufacturer. The subsidiary, which produces cars for the Indian, Southeast Asian, and Southern African markets is Suzuki’s most profitable subsidiary in the world.

Last year’s police raids of workers’ homes led to the jailing of the 147, who face possible murder charges, and the firing of more than 2,400 permanent and contract workers, after they formed the Maruti Suzuki Workers Union (MSWU).

The MSWU Provisional Working Committee, the leadership group of union members who are not in jail, today demanded that the government release all arrested workers and activists, including those who have spent the past year in Gurgaon Jail without any bail, and 10 workers and supporters jailed for two months for supporting them.

In addition, MSWU demanded reinstatement of the workers fired by Maruti Suzuki, as well as workers dismissed at Suzuki Powertrain India and Suzuki Motorcycles India, also in Manesar, and an independent impartial inquiry into the incident of July 18, 2012.

Until the government responds, workers said, they will continue their indefinite sit-in outside the plant in Manesar, demonstration, and hunger strike.

Permanent and Contract Workers Organize Together

The Maruti workers had built local and national support for their struggle through employer lockouts and two sit-down strikes. They began organizing in early 2011 to challenge the tiered wage system and oppressive conditions. Workers sought to equalize wages and conditions between permanent and informal workers, who receive low wages and are regularly dismissed.

The workers rejected management’s effort to impose the company union that fails to represent workers at their older plant in Gurgaon, demanding instead an independent union free of employer domination. MSWU is one of many independent unions proliferating in India, as the traditional unions decline fast.

U.S., European, and Japanese corporations are investing in manufacturing in India on the condition that independent unions are eradicated. The dramatic growth in foreign investment in India’s industrial belts, and the liberalization of the country’s economy, comes at the expense of human rights violations of its urban workers.

Maruti Suzuki prides itself on producing one car every 45 seconds at the Manesar plant, the highest rate in the world.

An international delegation by the International Consortium for Labor Rights in June 2013 found that the company pegs pay to productivity rather than paying set wages. The company pays far less than other auto producers—barely enough for basic necessities. Workers are deprived of break time, and typically work two hours overtime each day.

Contract workers, who perform the same functions as permanent workers without job security or benefits, are 75 percent of the workforce.

Since the state fails to enforce its own labor laws, workers at Maruti Suzuki and in the major industrial belts are organizing independent unions to improve wages and conditions.

That MSWU dared to contest the disparity in wages and the lack of job security for contract workers has unified employer opposition throughout India. Contract and temporary workers represent a majority of workers in India's manufacturing sector, keeping wages down for all and expanding profits.

Auto manufacturers have the unequivocal support of government authorities in fending off unions. Police arrest workers who mobilize; judges in the state courts keep them in jail.

One Sit-Down Strike after Another

After an illegal lockout, Maruti Suzuki workers began a 33-day sit-down strike in August 2011—the third major worker agitation of the year at the Manesar plant.

The action ended in a compromise—but when permanent workers learned that casual workers would be dismissed, they began another sit-down inside the factory, while casual workers maintained their sit-in outside the plant gates.

The workers sustained the sit-down even when management hired private security personnel to attack them. Through the resilience of the workers, all casual workers were soon reinstated.

MSWU requested the official registration of their fledgling union with the Haryana state Department of Labour in May 2012. Maruti Suzuki management responded fiercely, initiating an unprecedented campaign of intimidation, terror, and violence—with the active support of Haryana authorities and the complicity of the Indian government.

Two months after MSWU’s official founding, on July 18, 2012, the company dispatched bouncers into the plant to intimidate and attack rank-and-file activists.

Mayhem followed. Workers fled. The human resources department was set on fire, leading to the asphyxiation of the only human resources manager who supported the new union. (The plant suffered minor fire damage.)

To place blame for the death on the workers—though they had already left the plant when the blaze was set—management enlisted the Haryana state police to hunt down and arrest hundreds of workers, seeking to charge them with murder.

Family members were detained and harassed into revealing the whereabouts of their worker relatives. Many workers were tortured at the hands of local police, and family members beaten.

For over a year, no independent investigation has been conducted. To date, 147 MSWU Manesar rank-and-file workers remain in jail without charges or bail, and 66 are in hiding. The workers face criminal charges of conspiracy, attempted murder, and murder—all based on little evidence.

Even after state persecution began, workers in Manesar intensified their resistance to Maruti Suzuki and other multinationals in the industrial belt. In the last year, MSWU’s demands have focused on the release of their co-workers and fighting to maintain their union.

The evening of May 18, one day before protesters were promised a meeting with the Haryana Industries Minister, police violently attacked and arrested more than 100 supporters who were conducting a peaceful two-month dharna.

Police dispersed the protest by attacking with batons, water cannon, and tear gas.

“I do not know what keeps me going,” said the mother of one imprisoned worker. “I was beaten up recently in the police violence. It was with much pain and difficulty that I was able to return home. This is not the first time that the police have beaten us.”

Maruti Suzuki India Ltd. and the Haryana government are sending a message to other workers in the state and throughout India: if you attempt to organize, you will be met with repression.

Since working conditions remain tense in the plant, the Haryana state police maintain a station inside the factory.

Haryana, like several other Indian states, is trying to attract foreign investment by repressing labor. In a recent bail hearing decision, workers were denied bail based on the logic that unions inhibit foreign investment. On May 22, the Punjab and Haryana High Court said, “Foreign investors are not likely to invest the money in India out of fear of labour unrest.”

Most Indian trade union centers support the MSWU workers. The National Trade Union Initiative, a center dedicated to rank-and-file unionism, has taken up their cause actively.

The growing solidarity for MSWU—within India’s industrial belts, throughout India, and internationally—is drawing attention to the ways international corporations profit from exploitation in the global South, dispossession of the poor, and state violence against workers. But the formation and tactics of the MSWU rank-and-file union show how the working class in India is organizing independently.

To support the Maruti Suzuki workers, go to Labourstart.