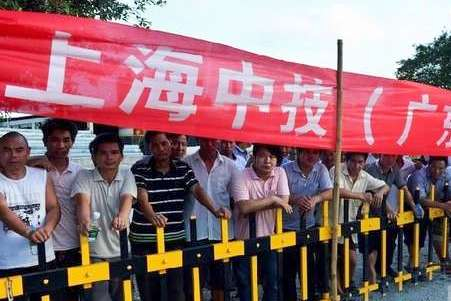 Zhongji executives, trapped in the building. They tried many methods to escape, none of them successful.

More than 200 workers at the Zhongji Pile factory in Huizhou, Guangdong Province, surrounded the company’s office building June 30. They demanded that the five executives inside pay them.

The workers said Zhongji, which makes concrete pilings for bridges, at first promised to pay them at least RMB 4500 per month (about $734 in U.S. dollars). But later their work hours were cut back because of the recession, and for the last three months they have not been paid.

What’s worse, the administrators declared they would sell the factory without the workers’ permission. This drove them to take action.

The workers blocked the main entrance to the building with desks and guarded the building in groups. They said they would not let the executives go unless they paid them.

The five executives were trapped in an office on the fifth floor. They tried many methods to escape, none of them successful. They even tried to attack the government officials who came to investigate, in order to provoke the police to take them away.

They viciously told the officials and journalists that the workers had ill-treated them, cut the water and electricity, and denied them food. In reality, the supplies of water, electricity, meals, and cold air were all right. The bosses were just not free to leave.

The government sent more officials to placate the workers and try to get both sides to an agreement, and the bosses were set free July 3 while the two sides negotiated.

It is not the first “kidnapping” this year. At almost the same time, on June 21 in Beijing, workers from SMS Medical Apparatus used the same strategy on their American boss.

In recent years more and more workers in China are choosing to fight. Some strikes are large in scale and well-organized, even though workers don’t have a union. But most are small like those described here, where the workers try to use as many “strange” tactics as they can—very different from strikes in other nations.

Han Tang works with a worker center in Guangdong Province. He adds, “I’d like to tell our friends all over the world that the Chinese workers are always with them, though they may not have many words.”