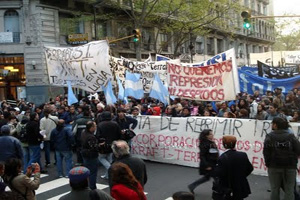 In the Kraft Foods factory north of Buenos Aires, management touched off a firestorm of worker discontent that included a 38-day sit-in, a police attack, and marches of thousands of supporters.

In the Kraft Foods cookie and candy factory north of Buenos Aires, management refused to act on simple, government-proposed safety measures against swine flu—such as paper towels--and touched off a firestorm of worker discontent that included a 38-day sit-in, a police attack, and marches of thousands of supporters.

Management’s response to the swine flu threat in July was to close the factory daycare center. Workers decided to hold a work stoppage—inside the plant. Management then fired 160 people, including elected delegates (stewards), violating Argentinean law.

The campaign to get the 160 workers back resulted in two months of militant action in solidarity with the fired workers. Eighty occupied the plant, while their co-workers struck, picketed, and blocked highways. Around the country thousands of students, union activists, and other groups held solidarity actions.

Despite a government order to rehire the delegates and negotiate on further rehiring, Kraft refused.

Kraft is the second-largest food company in the world. Workers see the latest aggression as part of the international corporation’s decision to restructure the factory, which makes Oreos and other cookies and candies. Management in the Illinois headquarters had already decided to cut jobs by contracting out, eliminating the night shift, moving to 12-hour shifts, and crushing the union, in moves reminiscent of Kraft’s policies in other Latin American countries.

On September 25 police took the factory from the occupying workers and attacked with tear gas, rubber bullets, dogs, and horses. They arrested 65 people and injured 12, including workers and their family members. The assault was televised live, and millions of Argentinians witnessed levels of violent repression not seen since the 1976-1982 military dictatorship or the December 2001 rebellion which removed the government in the wake of a major economic collapse.

The conflict at Kraft is igniting other popular protests across the country, with student associations, human rights groups like Mothers of the Plaza de Mayo, and unions representing subway workers and hospital employees demanding an end to union repression and mass firings. The broad-based citizen response is partly fueled by indignation at transnational corporations that violate national sovereignty by breaking labor laws.

The U.S. embassy issued a statement demanding protection of private property and a permanent solution to the Kraft conflict.

Kraft has now partially backed down. The company has rehired 70 fired employees; promised not to close any shift and to maintain all the jobs; allowed the delegates to enter the plant and do their union work, and agreed to discuss the situations, one by one, of the 45 workers that remain fired (another 45 agreed to leave in exchange for large buyouts).

Meanwhile, production has resumed, and workers are refreshing their forces and having workplace assemblies to discuss their next steps. Elections for union delegates will be held November 3. Union members are expected to show the company through their votes that they support their leadership—contrary to Kraft’s line that the conflict was caused by a small group of troublemakers.