In Wisconsin, When Bargaining Is Illegal, We Bargain ‘Informally’ 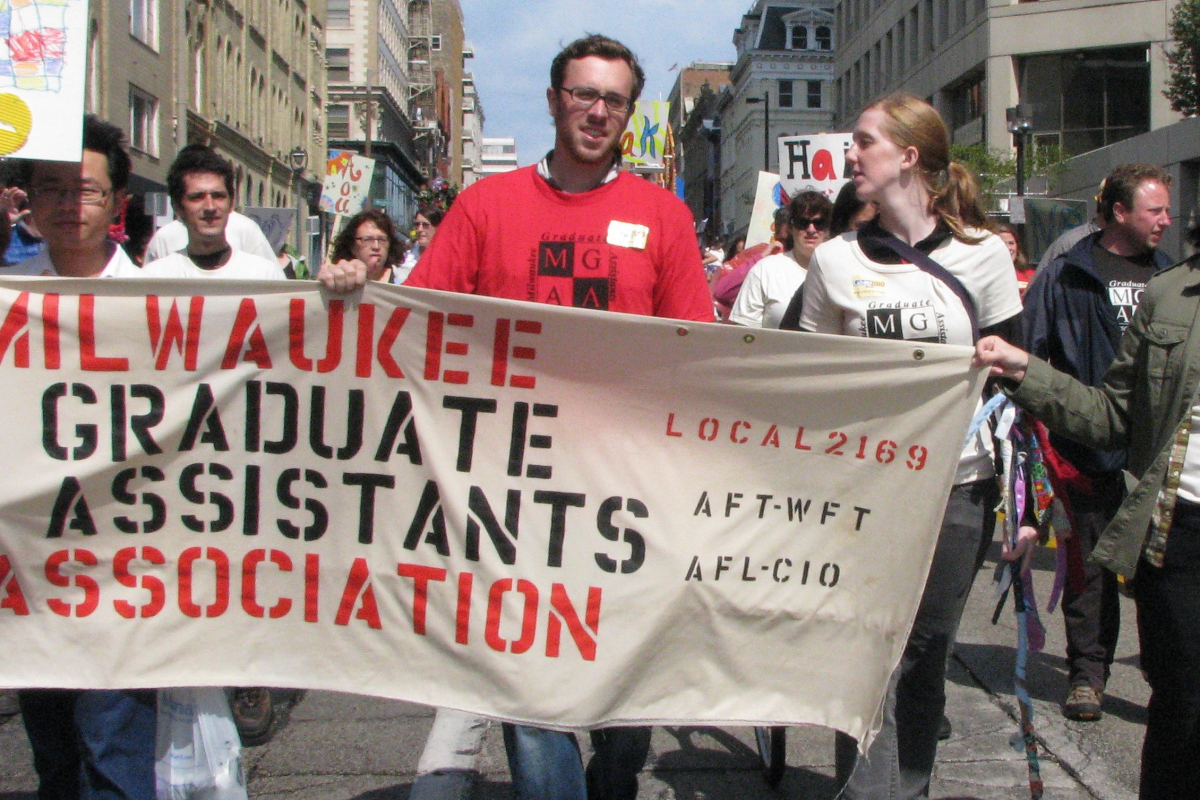 Lacking formal bargaining rights, the Milwaukee Graduate Assistants Association waged a campaign of escalating direct action in fall 2012, after a dean tried to cancel a benefit. Their "campaign of annoyance" was soon successful. Photo: MGAA.

After the Wisconsin legislature banned public sector unions from most collective bargaining in 2011, we had to come up with ways of dealing with management informally.

Governor Scott Walker’s Act 10 prohibits public worker unions from bargaining over benefits and working conditions, and it limits what we can bargain in wages to the rise in the Consumer Price Index. And to bargain over wages, locals must first “recertify” (a majority of bargaining unit members must vote that they want the local).

Many state employee locals in Wisconsin have chosen not to bother with recertification. Locals in the American Federation of Teachers are adopting informal bargaining tactics for items that are off the table.

Employers agree to informal “consent bargaining” outside of contracts—through verbal agreements, memorandums of understanding, or changes in policy—when faced with strong locals. In Wisconsin, where dues check-off and even “fair share” are prohibited, strong locals are those that understand organizing at the grassroots level.

UP IN THE AIR

In September 2012 a state judge found recertification requirements and the prohibition of dues check-off unconstitutional for city, county, and school district employees. He also found that, for this group of workers, the employer must bargain over all wage and compensation items. (His ruling does not apply to state workers.)

The Walker administration is appealing the ruling, so in most places, public employers are still refusing to bargain.

Act 10 reduces membership of all locals to zero when their contracts expire. From that point on, membership is entirely voluntary. Organizers work with local leaders to “re-sign” members.

The most successful locals sign up significant numbers through member-to-member conversations about the continued power of collective action and how their unions can operate in the new environment.

But members explained the concept of informal bargaining to their colleagues during repeated visits to their offices, asking what issues were important to them. They distributed a history of informal bargaining in Wisconsin, dating from before public sector unions had won collective bargaining rights in 1959. With these examples of past successes, potential members could imagine similar successes in the future.

During these conversations, they began to work out together how their union could operate and what priorities it should focus on.

The Stevens Point Academic Representation Council achieved majority membership and became the first new union to charter after Act 10. SPARC was so successful that the local won a national award from the Teachers union for the largest increase in membership in 2011.

FROM POSITION OF STRENGTH

SPARC used the information from workplace visits to create and vote on a bargaining platform, which was then distributed to member and non-member faculty and academic staff.

Leaders also gave interviews to local media about why they were forming a union and how organizing education workers would produce economic and civic benefits for the larger community. Recently, they’ve created a show on the campus radio station highlighting how members’ research and teaching contribute to society.

Members see this show as counteracting the negative image of public employees produced by Walker and other politicians.

Visibility has been crucial to their successes. SPARC approached the administration about informal bargaining only once the union had reached majority membership, publicized its bargaining agenda, and created a community presence.

Although the administration has not formally recognized the union, administrators agreed to meet with union leaders, and even though they have no legal obligation to bargain, in the last year SPARC has won a pool of money to address the problem of unequal salaries; free entry into various campus events; and access to budget information.

Although the local has had to write letters to pressure the administration to release certain budget information, the union now has friendly, regular informal bargaining with the chancellor, discussing items such as how to distribute money for salaries.

Some changes can be made outside the chancellor’s office. For instance, the music department voted to make certain events free to employees, after the union included the idea in its bargaining platform.

The union has also created a strong presence on the university’s existing governance committees, such as the Faculty Senate. One Senate resolution called for tuition waivers for all university employees and families, which is another of SPARC’s bargaining items.

When management refuses to go along, direct action can be another kind of informal bargaining.

Graduate assistants are exploited workers who teach as many classes as full-time faculty—but make a fraction of the pay. They have less prestige than faculty and thus often have to use different tactics.

The Milwaukee Graduate Assistants Association at University of Wisconsin-Milwaukee waged a campaign of escalating direct action in fall 2012, after a dean tried to cancel a benefit.

MGAA’s contract had expired. A dean announced that a specific type of summer tuition waiver would no longer be available, violating his previous pledge not to change the terms that had existed in MGAA’s contract.

MGAA members first emailed the dean to declare their objections, get more information, and attempt to move him. When it became clear he wasn’t going to budge, they launched a “campaign of annoyance.”

They used fliers to educate graduate students and faculty about the reversal, then organized members and allies to take escalating actions over a couple weeks.

The idea was to decrease the amount of work that could get done in the dean’s office. Members and supporters flooded the office with emails, then phone calls.

Graduate students, undergraduates, faculty, and staff filled out a card urging the dean to reinstate tuition remission and do no further harm. They delivered all the signed cards to his office. And they held an informational picket outside the dean’s building.

The dean relented, emailing the whole college to say he wasn’t making the cut and that MGAA had misunderstood. MGAA distributed a second flier pointing out that the union’s direct action had caused him to back down.

Not only did the union prevent the cut, it sent the signal that future cuts would be met with resistance from all campus constituencies.

Many other Teachers locals in Wisconsin are doing informal bargaining, too. The strongest ones de-emphasize the old legalistic activities of representing members in grievances and servicing contracts. Instead, they prioritize signing members up, educating them about the new environment, and activating them.

They don’t just react to problems as they arise, but focus on what they want to gain and create new strategies to win it.

Dawn Tefft is an AFT organizer who was assigned to SPARC and is a former president of MGAA.

A version of this article appeared in Labor Notes #408, March 2013. Don't miss an issue, subscribe today.
Related
Swarming Solidarity: How Contract Negotiations in 2021 Could Be Flashpoints in the U.S. Class Struggle »
Cleveland Heights Teachers Strike in the Snow, Beating Austerity with Solidarity »
Will the Supreme Court Overrule Farmworker Union Rights? »
When You're Winning in the Streets, Don't Lose at the Bargaining Table »
COVID Tipped the Scale: How King County Employees Made Childcare a Union Benefit »