View from Argentina: Which Direction for Pope with Checkered Past? 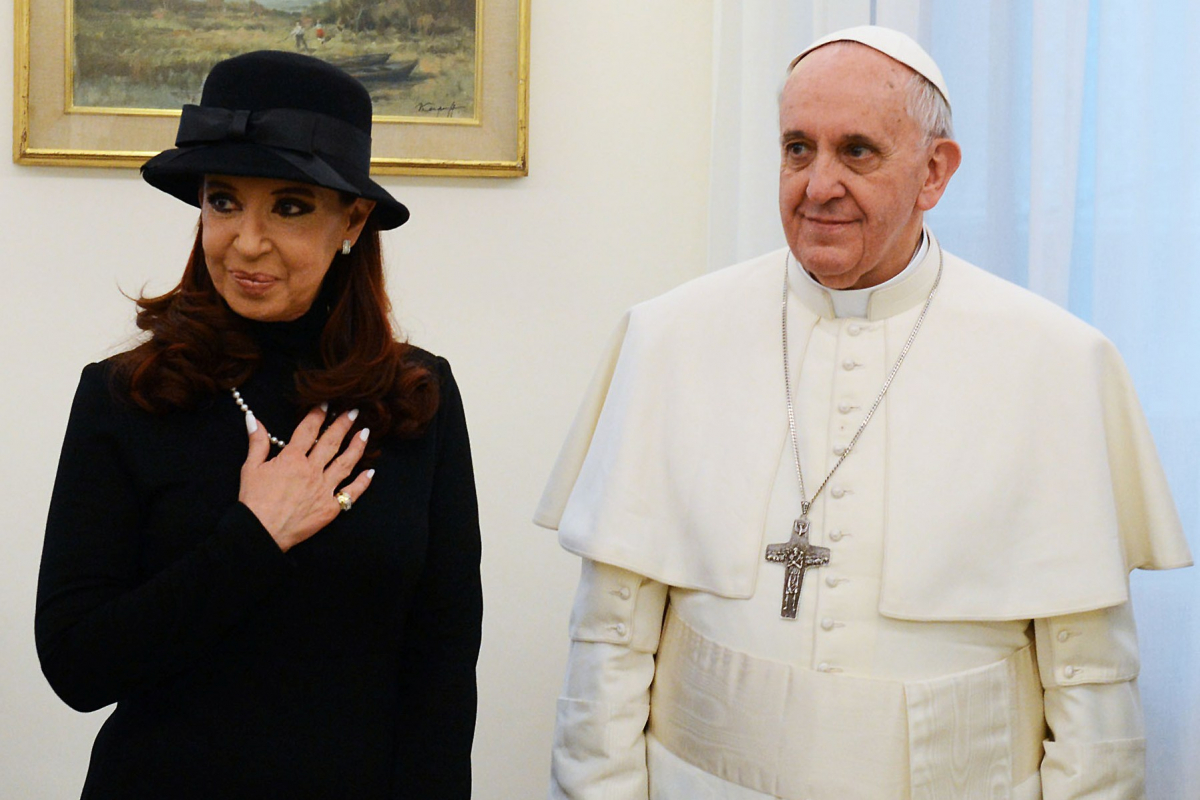 The conservative new pope has a tense relationship with the progressive administration of Argentine President Cristina Kirchner, but he has shown some support for workers' struggles. Photo: Presidency of the Nation of Argentina, presidencia.gov.ar.

No one in Argentina expected it. Everyone was surprised. The first reactions were skeptical, ironic. But then came the flood of favorable commentary. Catholics (the Catholic faith is by far the majority) and much of the general population were proud and flattered in a patriotic way, as Argentines.

On the right, the happiness was universal and euphoric. That first day, the country’s most important newspaper included a poster portrait of the new Pope. The mayor of Buenos Aires, a businessman, flew the papal flag in the city’s principal square, and illuminated its monuments in the papal colors, yellow and white.

The next day, 44 military officers and soldiers who are being tried for crimes during the military dictatorship of 1976-1982 appeared at their hearing smiling and wearing on their lapels ribbons in the papal colors.

These are only a few examples of the expressions of pride and joy on the part of that sector of Argentine society that felt Jorge Mario Bergoglio was from their ranks, and who saw his election as pope as their own triumph.

On the other hand, within the progressive Kirchner administration and among its activists, there were complaints, doubts, and mixed reviews. For years Bergoglio has had a tense relationship with the government, and his positions and official remarks place him clearly in opposition to it. The Kirchner administration has strong electoral support for its opposition to free trade treaties with the U.S. and the International Monetary Fund recipes, and for its support for social programs, human rights, and higher living standards.

Long History on the Right

Bergoglio comes from a church that has been allied with the powers-that-be throughout the history of Argentina and has unapologetically supported every military coup of the 20th century. In the past, there were some Liberation Theology priests and even bishops who supported the peoples’ causes, the poor and human rights. But almost all were removed, many assassinated during the military dictatorship.

In recent decades, given the conservative momentum of the last two popes, the Argentine Church has had left within it no progressive groups, at best isolated individuals.

This explains the church’s solid and militant opposition to divorce, gay marriage, and abortion, issues on which Bergoglio, the archbishop of Buenos Aires, has played a very active role. It is logical, of course, that he would defend these positions, as an authority of the Church. What is questionable is the backward, intolerant, and offensive arguments he made against those who think differently and demand their rights. For example, he has argued that gay marriage is being pushed by the devil.

During the military dictatorship, Bergoglio, then the highest Jesuit authority in the country, exposed and then failed to protect two priests from his congregation, Orlando Yorio and Francisco Jalics. They were kidnapped and held for six months, tortured, and finally let go.

These facts are well documented. Recently a government document from during the dictatorship was declassified. A functionary of the Argentinian state department wrote that Bergoglio had indicated that those two priests were leftists, that they had ideas foreign to the Church and links to the guerrillas, and that he asked the state department not to give them the passports they were requesting.

Since then, Jalics has said he’s forgiven Bergoglio. But he doesn’t say that these events never took place.

Eduard Fermín Mignone, an active Catholic, went to Bergoglio among others seeking help to save the life of his kidnapped daughter, Monica, one of the catechists. Mignone, who later founded one of the most important human rights organizations, wrote a book, Witness to the Truth: The Complicity of Church and Dictatorship in Argentina, relating his anguished search, along with a complete report of Church behavior during that period. He concluded bitterly that Bergoglio “was a pastor who had abandoned his flock.”

Adolfo Pérez Esquivel, an Argentine who won the Nobel Peace Prize in 1980, today claims that Bergoglio “didn’t have the courage to demand human rights more forcefully, [but] one cannot say that he was complicit with the dictatorship.”

But there have been more recent doubts. Bergoglio was called to testify in 2012 in a case where the military had taken away a child of leftists killed by the dictatorship and given her to a military family. (Such cases were very common.) He was interrogated about a family that in 1977 had asked for his help to find their pregnant daughter and her husband, both of whom had been kidnapped.

Bergoglio consulted with his contacts in the military and in the intelligence services, who told him that “a baby girl had been born and was with a good family” but that, regarding the couple, “there was no turning back.” The testimony of Bergoglio today could have helped to find that baby girl and those who took her, and to have brought those responsible to justice. But he declared that he couldn’t remember anything and that only recently, long after the end of the dictatorship, had he become aware of such kidnapping of the children of the disappeared.

Two Catholic priests have been on the front pages of the newspapers in recent years: Cristián Von Wernich for having participated directly in the torture and other crimes of the dictatorship, and Julio Grassi for abusing children under his care. Both are in police custody, but they haven’t been sanctioned by the Church and they continue to celebrate Mass. Another priest, Nicolás Alessio, who expressed his opposition to the celibacy required of Catholic priests, was expelled by church authorities.

Workers and the Poor

On the other hand, there are examples of Archbishop Bergoglio cooperating with workers in conflict. At the beginning of 2008 he sent an emissary to young workers at the Buenos Aires Casino who were carrying out a sit-in and hunger strike for dozens of their fellow workers who had been fired for trying to form a union. He invited them to visit him and offered to collaborate with them, and he did so in word and deed. We know of other workers who also sought his support.

This year he established a relationship with grassroots groups that fight human trafficking and confront powerful mafias that get rich off of prostitution. He has also worked with groups who denounce slave labor, particularly that of immigrant workers in clandestine sweatshops. And his intervention in efforts to rescue young victims of drugs and drug dealing is well known.

Regarding Bergoglio’s future in his new role, some say we should wait and see what path he takes. Others believe that, given his past and the state of the institution that he represents, not much will change, and he surely will strengthen the political opposition to progressive governments in Argentina and Latin America.

Daniel Ximénez Sáez is co-director of the Labor Studies Workshop in Buenos Aires, Argentina, a sister organization to Labor Notes.

Thanks to Dan La Botz for translation.