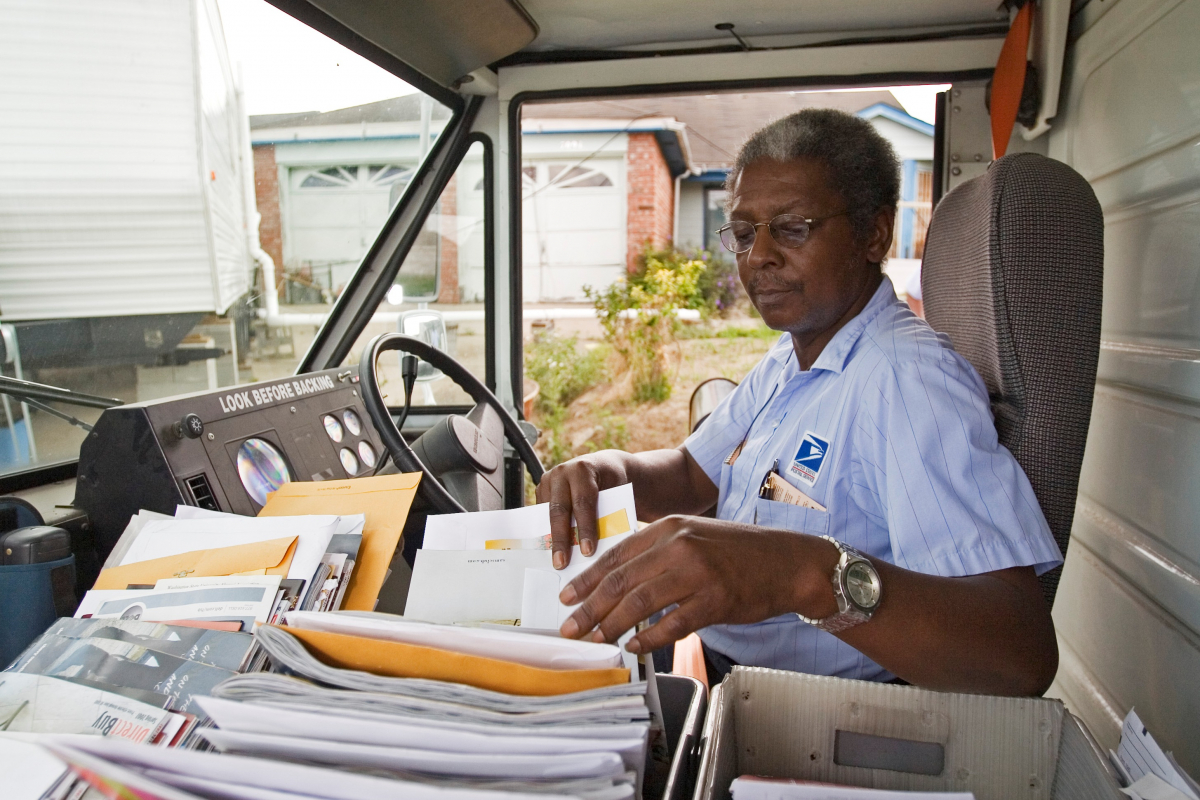 If your neighborhood letter carrier seems more hurried than ever, please be understanding: her every step may now be tracked with a GPS device.

A new program called IMD Wireless—already launched in some areas, and scheduled to roll out across the country by the end of 2013—uses Bluetooth-enabled cell phones to report carriers’ progress.

The tracking devices are 1990s-style flip phones that have GPS built in. “They were probably in the basement of AT&T, gathering dust,” said Frank Couget, a Manhattan letter carrier and steward.

The system works by electronically linking the cell phone with the handheld scanner each letter carrier already totes around.

The scanner is used to record deliveries (or attempts) by scanning bar codes on certain packages, such as those sent express class or with delivery confirmation. Already, the carrier’s pace is tracked, though in a more rudimentary way: she scans bar code stickers at certain mailboxes along her route, recording the time she reaches each “managed service point.”

In some locations, the number of MSPs per route increased from six to 15 last year.

Until now, however, the scanner data have been uploaded for analysis only after the carrier finished her route. Now the phone will send scanner data every 15 minutes.

It is not clear whether the data upload also reports the carrier’s GPS location.

“Cell phones will be carried by employees at all times they are on the street performing delivery or pick-up duties,” according to U.S. Postal Service (USPS) instructions shared on RuralInfo.Net, a rank-and-file site for rural carriers.

The rationale is to offer postal customers real-time tracking of packages—and to compete with UPS and FedEx, which already offer customers detailed tracking of each parcel’s progress. But “basically it gives management real-time ability to track us,” Couget said.

Package delivery, especially in dense urban areas, is a booming business in the age of online shopping. (Thus the Postmaster General’s plan to deliver parcels, but not letters, on Saturdays.)

Business newspapers were recently abuzz over a holiday-season rivalry between Walmart, which offered online customers same-day delivery in select cities via UPS, and Amazon, which offered the same to certain East Coast customers through USPS.

It may seem incongruous that the Postal Service is adding services and technologies at the same time it is closing post offices and cutting jobs in the name of its financial crisis.

But think of it this way: USPS is beefing up its money-makers—the services where it competes with for-profit shippers. At the same time, it’s squeezing out the unprofitable, inefficient, public-service elements of its traditional work, like delivering personal letters six days a week—or letter carriers taking the time to check in on elderly customers on their routes.

The new “real-time scanners” were deployed first in the New York City and Washington, D.C., areas. They are scheduled for all 67 postal districts in the U.S. by the end of the year.

In a discussion on Facebook, the biggest complaint from letter carriers who’ve been issued the phones is the cumbersome delay. The scanner cannot scan while it is uploading, which reportedly takes about a minute, every 15 minutes.

“Stupid thing always has to be uploading when it’s time to scan a package,” reported Dot Fearnley, “and usually a customer is waiting for it.”

Others worried about the phones getting lost, broken, or ruined in the rain. And some were concerned about the heightened surveillance of their workday.

“I just wish I knew exactly what was going on, on the other side of this GPS tracking,” commented Robert Pompano, Jr., “i.e., who’s looking at this info and what does it look like to them.”

Under the Postal Service’s current tracking system, MSP scans are not supposed to be used as the sole basis for discipline—but may be used together with other evidence.

Reports by the USPS Inspector General over the past several years concluded that busy supervisors weren’t making enough use of MSP data. The technology had cost millions to impose, and managers were urged to use it more aggressively to root out “theft of time” and “carrier misconduct.”

Who in the public would object? In reality, management has a bigger agenda.

“Management doesn’t spend the kind of money it spends on monitoring just to catch a few slackers,” labor educator Charley Richardson explained in an essay on tracking technologies in Labor Notes.

“Managers monitor to gather data and then analyze the work process and intensify it. They use data to cut corners, speed workers up, increase stress, and eliminate jobs.”

On Facebook, Maria Roesch of New Jersey worried the new changes could mean interrogations: “why were you at blah blah’s house for 2 min 9 seconds...?”

This is already the type of micro-management borne by drivers at UPS (see Big Brown Becomes Big Brother).

A version of this article appeared in Labor Notes #409. Don't miss an issue, subscribe today.

Alexandra Bradbury is editor and co-director of Labor Notes.al@labornotes.org
Related
Lessons from Labor History for Organizing Amazon »
Inside the Alabama Amazon Union Drive: An Interview with the Lead Organizer »
How We Turned Bargaining Around at Law360 »
China: Leader of Delivery Riders Alliance Detained, Solidarity Movement Repressed »
The BAmazon Loss and the Road Ahead »