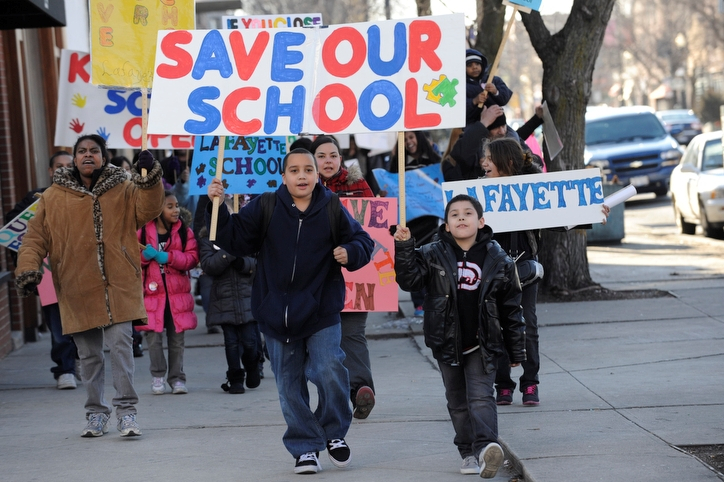 Students and parents from Lafayette School marched to their alderman's office March 21. Lafayette is one of a staggering 54 Chicago schools slated for closure—the most ever in a single year in a U.S. city. Photo: Bill Healy, Chicago Public Media.

Activists and leaders in the Chicago Teachers Union were already in full swing organizing for today’s citywide rally to stop school closings when they got the announcement last Thursday: the district revealed its official list of 54 elementary and middle schools to be shut down before the next school year.

News of the staggering number of closures, the most ever in a single year in Chicago or any other U.S. city, is likely to bolster turnout for today’s 4 p.m. action, where organizers are expecting thousands of protesters. In the immediate days following the announcement, smaller, often spontaneous protests have erupted outside schools slated for closure.

“We believe that our city is under siege right now,” said teacher and CTU organizer Brandon Johnson. “Students are recognizing this process as racist.”

He points out that almost all the closings target black and Latino schools. Fifty are on the West and South Sides of Chicago. All are in poor neighborhoods. The closings will affect around 30,000 students and 1,000 teachers.

“The only thing that’s like it is Hurricane Katrina,” said CTU Vice President Jesse Sharkey of the potential devastation, “except this is being done on purpose.”

But the planned closings have provoked unprecedented outcry and resistance from Chicago communities. “I don’t think we have seen this type of demonstration and dissent to these school closings before,” Johnson said. “Parents are leading the way. It’s spreading like wildfire.”

The Chicago Teachers Union is trying to make the closings a citywide fight rather than a school-by-school battle. The bonds with parents forged before and during the teachers’ strike in September 2012 have carried over into protests around the city, at hearings set up by the school district.

Today, protesters—including leaders from the teachers, hotel and restaurant workers, and service workers unions—will gather at individual schools and neighborhoods, then link up in downtown Chicago, where they will march on City Hall and the Board of Education. Community organizations are providing their members with transportation to the rally.

Officials may have hoped their “school utilization” meetings, powerpoint presentations, and breakout sessions would win parents over to support their schools’ being closed, but in many hearings (which were required by law), they could not execute any of their plans. The community members attending the more than 40 hearings voiced overwhelming opposition, despite the district’s attempts to “smooth over” potential closings.

These sessions were organized with nearly a half-million dollars in donations from Walmart’s charity, the Walton Family Foundation, which paid for a marketing agency to set up focus-group-style sessions.

Appointed schools chief Barbara Byrd-Bennett told the media she wanted to hear from community members in the hearings. What she got was the overwhelming message: don’t close our schools.

A February hearing in the Pilsen neighborhood on the South Side overflowed with shouting and protesting parents. They refused to participate in the break-out sessions, preferring to speak up in the large auditorium setting. Similar scenes took place in the Logan Square and Uptown neighborhoods.

School closing opponents are also concerned that making kids walk further to school, and especially across territory controlled by rival gangs, puts them in danger. Johnson asked, “Is this going to discourage students from regularly attending school?”

Jesus “Chuy” Campuzano, a South Side activist, attended several hearings and described them as a puppet show. “We turn on the news and hear about shootings all over Chicago,” Campuzano said. “We feel that you close more schools down, more shootings and violence in the city.”

In fact, Ritter said, high schools initially on the closing list were removed precisely because of the threat of gang violence.

Only two members of Mayor Rahm Emanuel’s appointed seven-member school board have work experience in the Chicago Public Schools (CPS), Ritter said. “We firmly believe the mayor of Chicago and his education advisers know little about public education,” he added. “None of them know anything about these neighborhoods.”

Teachers and school workers are, of course, wondering about their job security if school starts next year with 54 fewer campuses. A key issue in the recent strike was what would happen to teachers displaced by closings.

The union made some critical gains in that area. Teachers now follow their students to their new schools, with seniority. And now at least half of new teachers hired must come from the pool of displaced teachers. But teachers lost ground on how long they are paid while in the displaced teacher pool, from a year down to half a year.

Teachers knew, though, when the strike was over, that they were facing an even bigger fight over the future of public schools in Chicago, one that would require sustained and growing activism. In the 2011-2012 school year, 10 schools were closed and seven “turned around”—a process that involves firing every staff member, from principal to janitor, almost none of whom are rehired. Six turn-arounds are proposed for this year.

In November, teachers held a sit-in at City Hall to protest potential closings, and 10 people were arrested when they refused to leave without speaking to the mayor.

A Disaster of Their Own Making

The union opposes what leaders call a “manufactured crisis”: a series of intentional policy decisions to underfund public schools while boosting charter schools. Once public school enrollment drops, the board can close public schools and justify charters.

The board’s rationale for closing schools has changed from month to month. The original reason was what it called too many “empty seats,” claiming that CPS had lost 145,000 students between the 2000 and 2010 censuses. But the correct figure, it turned out, was only 30,000.

And teachers question whether low enrollment is an issue at all; CPS is using 30 students per class as a measure for whether a school is fully utilized. Brandon Johnson is worried that class sizes will only rise.

“We know that these school closures are setting things up for class sizes that are out of control,” he said. “That is terrifying. Class size is a predictor for student outcomes.” A CPS spokeswoman argued in the Chicago Sun Times that even 40 students in a class is acceptable for Chicago schools, if led by what she described as a successful teacher.

In the board’s view, Ritter said, that means getting rid of high-seniority teachers, who in these neighborhood schools are usually African American women—and who are more expensive because of their seniority—and replacing them with young whites from the suburbs who’ve been through a one-year “alternative certification program,” with six weeks of student teaching.

The second reason the board gave for closing schools was a claimed billion-dollar deficit. But, Ritter said, every year the board projects a deficit but ends the fiscal year with a surplus. A year ago a $700 million deficit was predicted, but by last summer the board was $300 million in the black.

The board claimed that closing the 54 schools would save $560 million on construction and $43 million on operating expenses over the next ten years. But studies by the Pew Charitable Trust and Washington, D.C. auditor have found school closings don’t end up saving much money. School buildings are often difficult to sell and must be maintained, even when empty. Teacher leaders said vacant schools will blight already struggling neighborhoods.

So the teachers union disputes the estimated savings. In Washington, D.C., Chancellor Michelle Rhee said in 2008 that she would save $23 million by closing 23 schools; instead the closings cost the district $40 million.

All along the board cited these budgetary reasons for closing schools, saying any closures had nothing to do with performance. But finally Byrd-Bennett said she would put on the list only the worst-performing schools—the so-called “level 3s”—again, those that had been disinvested from, with constant upheavals in staff and leadership. She promised that children from closed level 3 schools would move only to level 1 or level 2 schools. In a third of the cases, though, the transferred-to schools are also level 3.

The CTU wants the mayor to put more resources into schools, not fewer, and union leaders claim that reforming the city's tax increment financing system (TIF) could put as much as $300 million back into school coffers. TIF programs were originally established to channel tax dollars directly into fixing up low-income neighborhoods, but now are being used to subsidize development in the city’s glitzy downtown.

How to Stop It

Sharkey said there are still opportunities to influence city leaders and decision-makers, at a time when gun violence is plaguing the city and many Chicago communities are not recovering from economic hardship.

“We are trying to give a vision about how we can actually stop this,” Sharkey said. He noted that today’s protests are part of a continuing plan to involve more Chicagoans in the struggle.

“The challenge we face is that the actual decision-makers are insulated from democratic decision-making,” he said.

No one made this more evident than Rahm Emanuel, off on a skiing holiday when the closings were announced, while Byrd-Bennett said the closings were evidence CPS officials were “actually listening to parents” and that there was “incredible support” for the closings in the affected communities.

There will 213 new hearings now that specific schools have been named, according to Sharkey, and thus more opportunities to pressure lawmakers and appointed school officials. “If we do 213 begging sessions that is going to be really bad for us,” Sharkey said. The union wants to “turn them into organizing sessions.”

“If we build a large enough movement,” he said, referring to protest tactics of the civil rights movement and the 1960s, “we can provoke a real political crisis in the city. The mayor is going to have to figure out what he is going to do.”