Cambodian Workers Camp Out, Hunger Strike Against Walmart and H&M 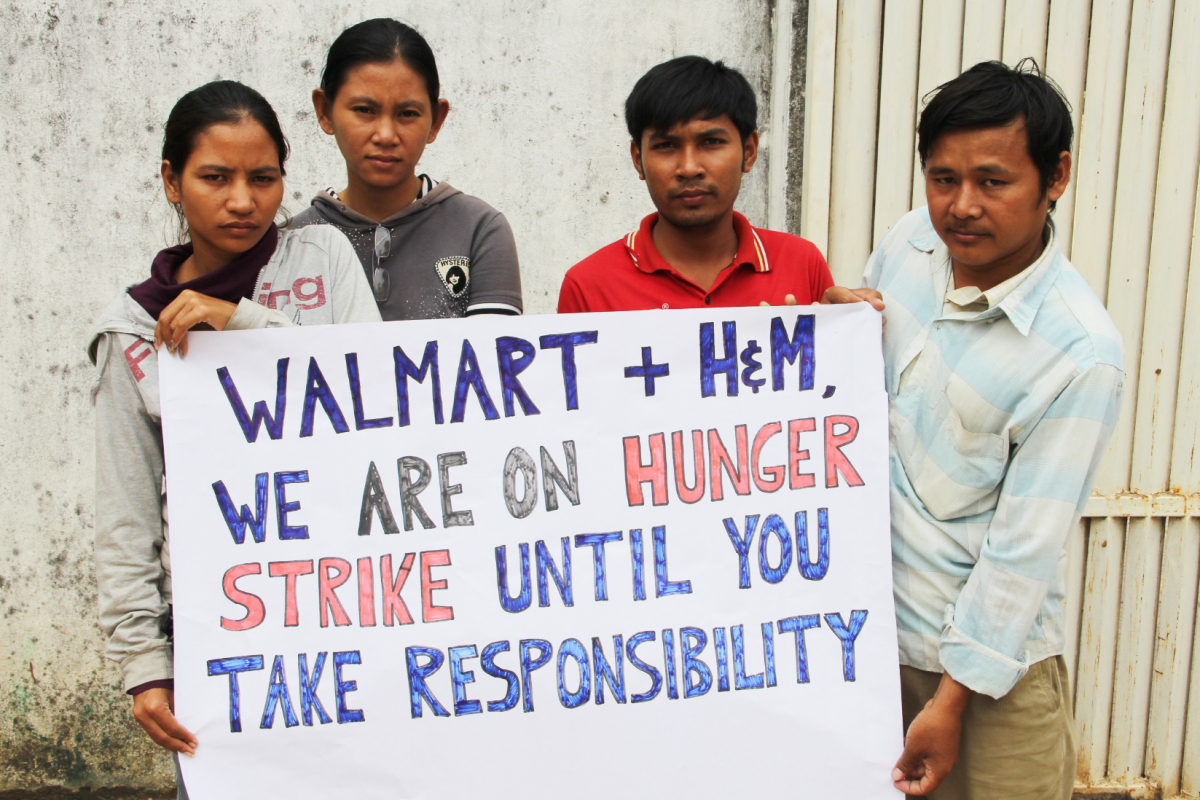 Hundreds of Phnom Penh workers are camping outside their shuttered garment factory to demand Walmart and H&M pay them the wages they are owed. This week they launch a hunger strike. Photo: James McCormick.

UPDATE, March 1: The Kingsland workers have won their demand for back wages, in a settlement worth over $200,000, reports the worker center Community Legal Education Center.

Self-organized garment workers at a Walmart and H&M supplier factory in Phnom Penh, Cambodia, have been camping in front of their shuttered factory for almost two months to prevent their bosses from taking out the sewing machinery.

Now the workers have escalated to blocking roads, and will launch a hunger strike February 27—all to push Walmart and H&M to pay them the back wages they are owed. Their cause is drawing support from workers at another Walmart subcontractor on the other side of the world.

“We decided to go on hunger strike to show that we not just any workers,” said one of the leaders, Sorn Sothy, 26, who works in the warehousing part of the Cambodian factory. “We are strong, committed, and united.”

The workers were informed in September that their factory, Kingsland Garment Co., Ltd., would temporarily close until January. Under Cambodian labor law, they would be paid 50 percent of their wages during this time, and brought back to work in January.

But in December, the paychecks stopped coming. The company union told the workers that the company was bankrupt and the owner had fled the country.

The garment workers are owed around $200,000 collectively—less than what Walmart makes in profits every six minutes.

Since their boss-run union wouldn't fight back, 200 workers organized themselves and began protesting outside the factory gates January 1. In the middle of the night January 3, they noticed company staff attempting to remove the sewing machines from the factory.

“We decided to start sleeping outside of the factory to prevent management from taking the machinery out,” said Yorn Sok Leng, 30, who has worked at the factory for two years.

With the help of a worker center, the Community Legal Education Centre (CLEC), the workers occupied the outside of the factory—setting up tarps, a sleeping area, and a kitchen.

Walmart and H&M have agreed to come to Cambodia to meet with them March 1, but the garment workers are continuing to find new ways to hold the brands’ feet to the fire. In the days leading up to their meeting, in addition to the hunger strike, they plan “flying squad” roadblocks, a tactic they have borrowed from workers at another shuttered factory.

They staged their first roadblock February 24 in grassroots fashion—only calling to invite allies from the worker center the night before the demonstration.

Many of the people who were delayed by the two-hour roadblock knew about the garment workers’ fight, and actually cheered them on.

In an email to the CLEC, Walmart and H&M have claimed they ended their relationships with Kingsland Garment in September, and had “paid in full,” so they had no responsibility for what happened to the workers afterwards.

Workers aren’t buying it. “The owner ran away. It is Walmart and H&M that made the profits off of our work, so they are the ones that need to pay,” said Oun Buy, 33, who has worked at the factory for 10 years.

It’s a familiar problem: multinational corporations use layers of subcontractors to duck responsibility.

Walmart in particular is notorious for failing to enforce its own rules. Its supplier standards make it responsible for contractors’ behavior, but instead of forcing improvements, when a factory is caught in violations, it is easiest for Walmart to cut and run—firing the contractor and leaving workers with nothing.

The International Ladies Garment Workers Union dealt with this problem in the U.S. in the early 20th century by developing jobber’s agreements, which made the “jobber”—in today’s terms, the brand—responsible for wages and conditions in factories producing their garments. Such agreements, won with strikes and other militant actions, are widely credited with ending sweatshop conditions in the U.S. garment industry.

But brands eventually found a way to circumvent these agreements: moving production to the non-union South—and then, with globalization, overseas, to countries where labor laws and enforcement are weaker, and where union leaders are physically attacked, threatened, and even assassinated.

Although the race to the bottom in labor standards has hurt garment workers around the world, many in the U.S. accepted the line that Cambodian (or Chinese or Bengali) workers were taking “our” jobs. Cross-border solidarity in the Walmart supply chain offers a seed of hope that this perception can change.

“We’re thankful to the Walmart warehouse workers,” said Poung Phirum, 23. “The Americans who are supporting us work for Walmart, just like us.”

Workers at an Illinois warehouse, who load and unload garments and other Walmart products 14 hours a day, plan to show their support for the Cambodian workers with a demonstration at a Walmart store.

“We are all in the same fight, whether in Cambodia, Bangladesh, America, Mexico, or anywhere else,” said Mike Compton, one of the Illinois strikers. “It's time for [Walmart] to take responsibility for conditions in the factories, warehouse, stores, and everything else in their supply chain.”

James McCormick is the pseudonym of a former Walmart warehouse worker from the U.S. who is now in Cambodia supporting the garment workers’ organizing.