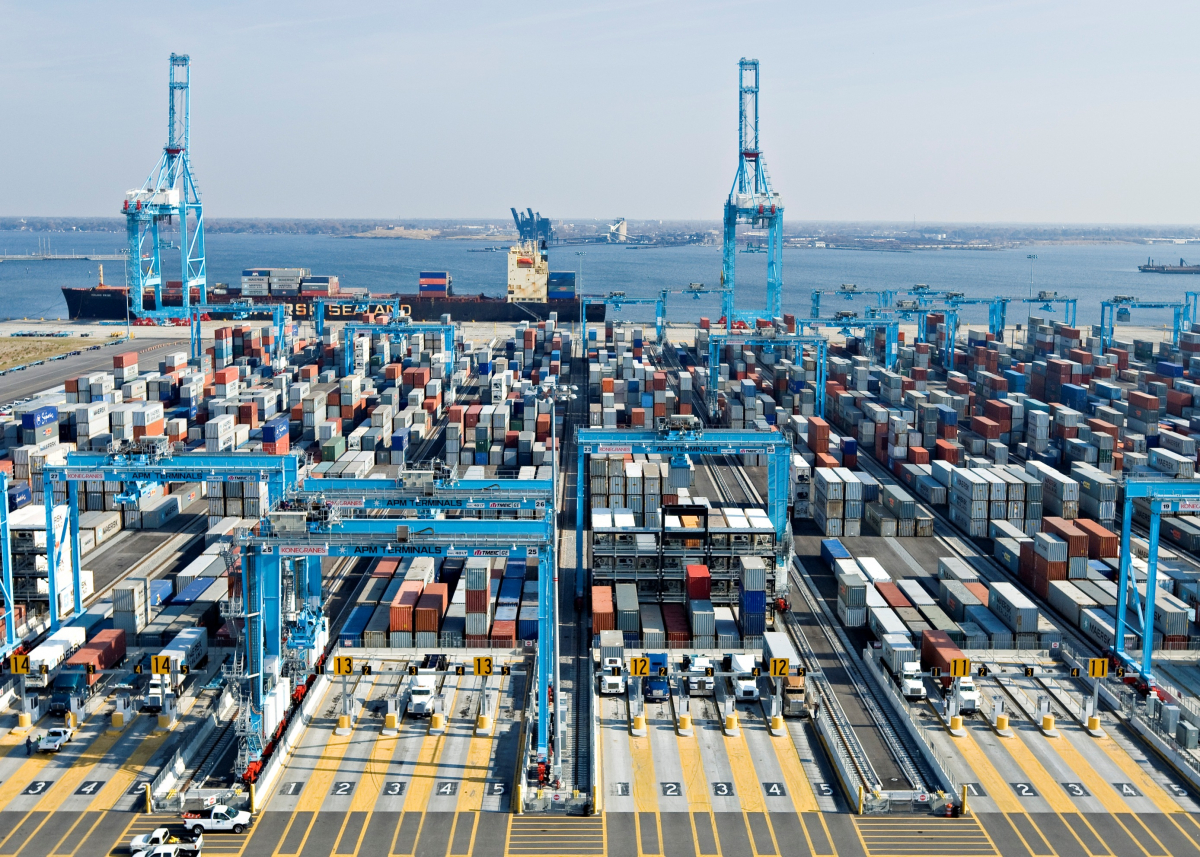 Automation, like the remotely-operated yard cranes in Norfolk, Virginia, is a growing concern for longshore workers on both coasts. Photo: APM Terminal.

With their pivotal position in the global supply chain, dockworkers are often considered the standard-bearers of on-the-job power. But on both coasts, this union stronghold is under stepped-up employer pressure.

Terminal operators and shippers are pushing leaner staffing, challenging longstanding work rules, and introducing job-displacing technology. They are also driving a wedge between standards for longshore workers handling containerized cargo and for those who do everything else on the docks.

The union response has been uneven, after the widespread disruptions and civil disobedience workers used during a heated battle in Longview, Washington, in 2011-2012.

Port clerks in Southern California have just voted to reject the settlement that sent them back to work in December after an eight-day strike. East Coast longshore workers, who narrowly avoided a strike in the final days of 2012, are weighing whether to accept a controversial deal reached earlier this month. And West Coast grain handlers also opted not to strike in late December, even though employers declared impasse and imposed a contract workers had roundly rejected.

The steady drip of outsourcing drove 600 clerical workers, members of Longshore Union Local 63’s Office Clerical Unit (ILWU), out on an eight-day strike in the ports of Los Angeles and Long Beach November 27.

After more than two years working under an expired contract, their strike provoked the biggest disruption in West Coast container traffic since the employers’ 2002 coastwide lockout.

Picket lines quickly spread across both ports, eventually idling close to 10,000 additional longshore workers at 10 of the 14 terminals. Over $400 billion worth of container shipments—nearly a third of all such shipments into the U.S.—pass through the two ports each year on their way from far-flung factories to retail shelves.

At its peak the strike had 13 ships anchored offshore, waiting to discharge cargo, while another 18 were re-routed to other ports.

The clerical workers handle invoicing and billing records and schedule on-site customs inspections. Outsourcing has moved 50 of their bargaining unit jobs to non-union office workers away from the ports, from Colorado to Costa Rica.

After eight days of high-stakes negotiations, including federal mediation and an eleventh-hour intervention by Los Angeles mayor Antonio Villaraigosa, strikers returned to work December 5 with new limits on outsourcing.

But clerical workers have reportedly rejected the agreement. No one from the union could be reached for comment, but there is speculation that details of final contract language, settled after the return to work, fed the “no” vote.

A 200-person committee will convene March 12-14 to review the proposal and either recommend it to members or send negotiators back to the table.

Reports indicate the six-year deal includes backloaded raises—no raises in the first half of the agreement, then one dollar each year for the final three years.

The deal also restores a controversial cap on the “container royalty,” an annual productivity dividend paid to longshore workers based on tonnage moving through containerized ports. The dividend was established with the introduction of containerized shipping in the 1960s to compensate for the huge loss of longshore jobs. ILA members won removal of the cap in their 2009 negotiations. Now it’s back.

“People are upset,” noted Mark Bass, president of ILA Local 1410 in Mobile, Alabama. “There were certain things the ILA promised to stand on, to bring everybody up.”

According to Bass, workers are also concerned the modest increase in the employers’ contribution to benefit funds—a extra $1 per hour worked over the life of the agreement—isn’t nearly enough to shore up local pension, holiday, and vacation funds, which are in poor shape after the financial collapse and continued recession.

Ken Riley, president of Local 1422 in Charleston, South Carolina, and national vice president, shares this concern. “In our local we always say you’re only one accident, or one diagnosis, away from a pension.” he said. “That’s why we’ve done a lot of education, particularly with younger members, so folks understand that improving pension benefits is not just for folks about to leave the industry.”

But Riley also pointed to some advances in the current agreement, including a faster progression to top pay—from nine years down to six—and a first-ever coastwide agreement on automation.

The automation deal formalized future negotiations over the introduction of new technology, and will channel displaced workers into other ILA jobs. Employers also agreed, in principle, that jobs created by new technology will be in the ILA’s jurisdiction.

“It won’t give us 100 percent protection,” Riley noted, “but we did pretty well.” The automation deal is similar to the one struck by West Coast longshore workers and employers after the coastwide lockout in 2002.

Automation has been a growing concern in the ILA since the world’s largest shipping company, AP Moller-Maersk, opened a semi-automated container terminal in Norfolk, Virginia in August 2007. The move introduced remotely operated yard cranes, controlled through a combination of GPS technology, cameras, and computers. The rail-mounted cranes stack the huge containers seven high and eight wide, delivering them to trucks or rail cars. Six cranes can be operated by one operator from a computer booth inside the terminal.

A similar system is being developed in Bayonne, New Jersey, part of the East Coast’s biggest port system, surrounding New York City. And in Jacksonville, Florida, port authorities have already approved construction of a fully automated terminal operated by the shipping giant Hanjin.

As bargaining now shifts to local issues in each port, concern remains high over employer proposals for drastic cuts to staffing levels and crew sizes, particularly in New York and New Jersey.

The West Coast Longshore union and the Pacific Northwest Grain Handlers Association are at a stalemate. The two sides were locked in tense negotiations late last year, with the ILWU trying to maintain longstanding master contract standards for the 3,000 longshore workers who handle grain along the Puget Sound and Columbia River.

Longshore workers in the region move nearly 30 percent of all U.S. grain exports, including half the nation’s wheat shipments.

The conflict came to a head December 18 when employers declared impasse and pushed the four ILWU locals to vote on their “last, best, and final” offer. Grain workers rejected the proposal by 94 percent. But two of the association employers—Columbia Grain and United Grain—imposed the new terms anyway on December 27, hoping to provoke a strike.

According to Sundet, these employers have taken full advantage of the high prices—and hefty profit margins—accompanying this year’s low harvest, spending several months, and millions of dollars, preparing for a showdown with the ILWU. Grain operators fortified terminal entrances in anticipation of aggressive picket lines and installed new surveillance technology to limit the effectiveness of work-to-rule strategies.

Rather than strike, the ILWU chose to report to work under the newly imposed conditions, and is considering unfair labor practice charges against the two companies while trying to hammer out a better deal separately with TEMCO, a joint venture between global agribusiness companies CHS and Cargill. Terminals for the fourth employer, Louis-Dreyfus Commodities, have been shuttered for construction, but the company continues to participate in negotiations.

The union remains tight-lipped about TEMCO negotiations, but it is unclear how a settlement—even one protecting master contract standards—can be spread to the two hard-line employers.

Last year’s pitched battle in Longview, Washington, over 25 jobs cast a long shadow over bargaining. ILWU members squared off with grain giant EGT after the company announced it would operate its new state-of-the-art terminal with a different, compliant union. The ILWU finally reached an agreement after months of picketing and direct action that included occupation of the grain terminal, a blockaded train shipment, and scores of arrests.

Despite the militancy, the EGT contract loosened work rules and staffing standards compared to the master grain contract. Now employers are pushing to spread these concessions, such as regular 12-hour shifts, bypassing seniority, and greater flexibility to use supervisors for bargaining unit work.

These developments only raise the stakes for the master contract negotiations coming up in 2014, covering 15,000 West Coast longshore workers. For generations these ILWU members have set the bar for militancy, on-the-job organization, and top-notch contracts. Employers clearly are gearing up to loosen labor’s grip on a key chokepoint in their global supply chain. Look for fireworks in June next year.

Mark Brenner is the former director of Labor Notes and is currently an instructor at the University of Oregon's Labor Education & Research Center.
Related
It's Awfully Convenient for Shippers that Longshore Workers Get Blamed for Delays, As Contract Fight Looms »
Insatiable Shipping Companies Set the Table for the Suez Canal Ship Debacle »
Review: This Little-Known Black Wobbly Dockworker Led the Most Powerful, Democratic Union of His Day »
West Coast Dockers Stop Work to Honor George Floyd »
Longshore Young Workers Come to the Aid of Tenants Facing Eviction »