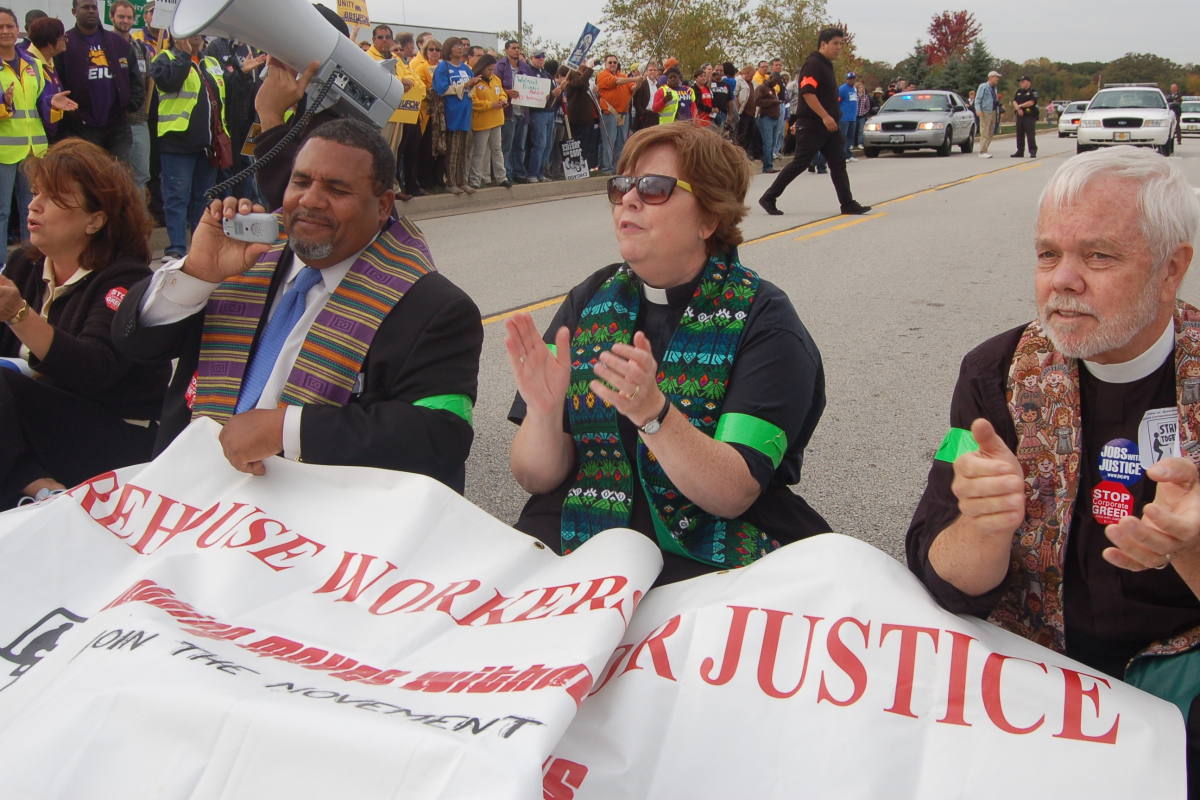 The most clear-cut victories along the Walmart supply chain—though small in absolute terms—have been in warehouses, which is not surprising, because warehouses are a chokepoint in Walmart’s sophisticated logistics operations.

The $2.2 trillion in goods that enters the U.S. from abroad each year must pass quickly through the hands of logistics workers—dockworkers, port truckers, railroad workers, truck drivers, and warehouse workers—before ending up in stores. A work stoppage at any point blocks the flow of not just iPhones and pajamas but also profits.

As the U.S. becomes more of a goods-mover than a goods-maker, the logistics chain becomes to the far-sighted organizers of today what big factories were to the CIO in the 1930s.

For a companion article on strategy in retail store organizing, see: In Walmart and Fast Food, Unions Scaling Up a Strike-First Strategy.

In giant complexes of warehouses in Southern California, Illinois, and New Jersey, workers’ organizations aided by unions are talking about strategy.

Nick Allen, director of the Warehouse Workers United (WWU) campaign east of Los Angeles, says that “2012 was a really good first step. Workers in the Walmart supply chain showed they were capable of taking action. Our focus on Walmart as the largest player in the logistics industry is getting Walmart’s attention.”

Both California and Illinois saw small strikes last year, and Allen predicts more workers will be so moved in 2013. In the Elwood, Illinois, warehouse that handles 70 percent of Walmart’s imports, managers fired activists in September for agitating. Thirty-eight—out of a workforce of hundreds—then struck for three weeks.

All ended up rehired with full back pay. Management even met demands for fans and safety equipment.

The workers were taking advantage of labor law that allows them to use “concerted activity” to defend their rights. Workers may even act to protest unfair practices at their employer’s other warehouses, or other stores.

WWU is affiliated with the Change to Win federation, which includes the Food and Commercial Workers as well as the Service Employees and Teamsters. In Illinois the organizing is a project of the United Electrical Workers’ (UE) Warehouse Workers for Justice.

As important as showing Walmart that workers know their rights, say organizers, is showing both workers and the company that these workers have economic power.

In Elwood, a rally drew 600 supporters from the Chicago area and 17 civil disobedience arrests, including clergy. Managers were frightened into closing operations for a day, a move that organizers calculated cost Walmart $10 million.

But organizing in warehouses, unlike in the stores, is hampered by the fact that Walmart and other retailers contract out the work to layer upon layer of low-paying, wage-cheating temp agencies.

Turnover in warehouses is mind-bogglingly high. One worker who participated in last fall’s strike in Elwood said most temps in his warehouse don’t last more than a month. He believes organizing there can last only if some workers who are dedicated to the project manage to stick it out.

It’s worth thinking down the road to a model that would allow a union to persist despite turnover, assuming Walmart clings to the subcontracting model: perhaps a hiring hall as in longshore, or a requirement that temps be permanently hired after 90 days.

One other ruse companies use to keep workers from organizing is to falsely classify them as independent contractors—the status of the vast majority of port truckers, who drive goods from docks to their next transfer point.

The Teamsters won a major victory in January when port truckers in Long Beach, California, signed a union contract with huge raises. But those truckers were among the few hired as regular employees.

EVEN WITHOUT A UNION

In warehouses, a recognized union is far off. Last year’s strikes were certainly not strikes for union recognition, which don’t carry the same legal protections; if they had been, strikers could have been permanently replaced.

Luckily, it doesn’t take an entire warehouse workforce withdrawing labor to cause a bottleneck for management. “Workers in one subcontractor shut the whole place down,” said former warehouse worker Phil Bailey of the strike he participated in.

“This shows you don’t have to go through a card drive and recognition and negotiate a contract before you can take action,” he added.

That’s what organizers are banking on. And they’re the first to admit that future steps are unpredictable. Allen admires the “open source” model that store workers are using, which is “not as organizer-intensive,” and he is “hopeful there’s a tipping point where workers see enough struggle in an area that they join in.”