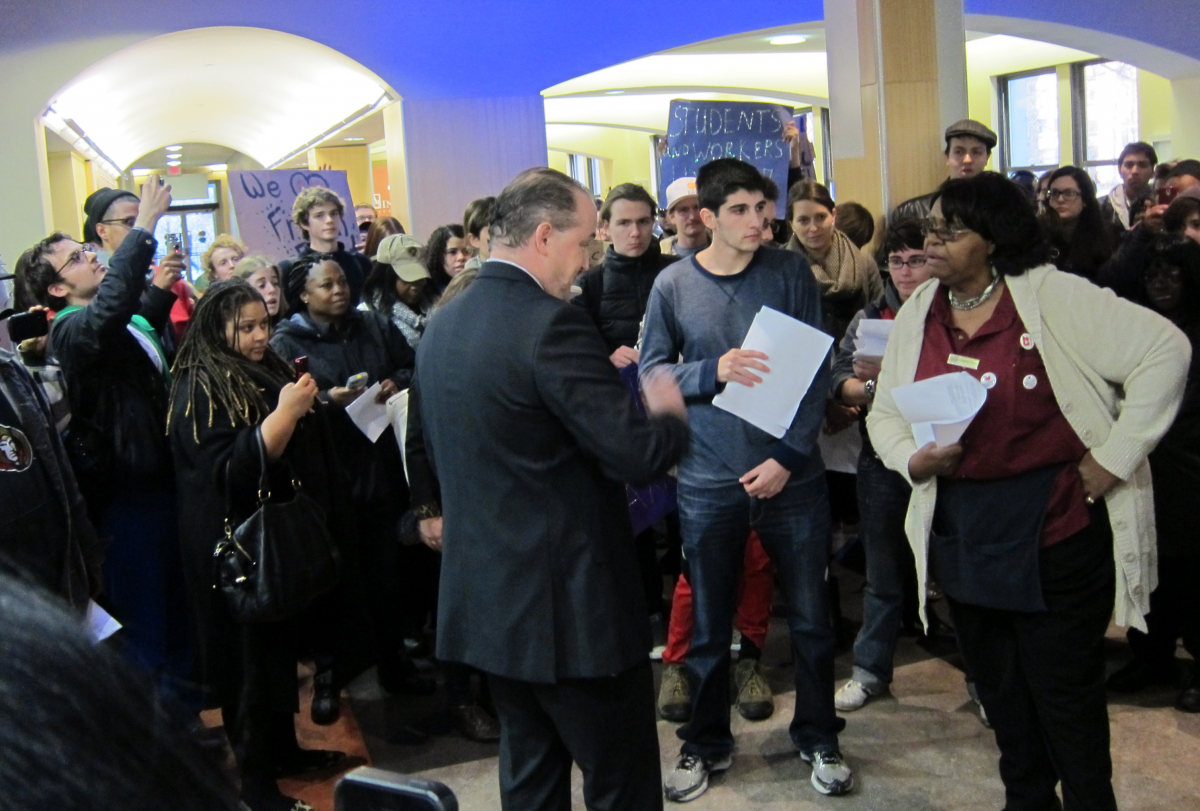 On the American University campus in Washington, D.C., a movement is growing to make the university accountable for food sustainability—and it begins with the workers who cook and serve our food.

Students are working with the food service workers union UNITE HERE to demand not only “real food” but also “real jobs” on AU’s campus.

Our Real Food, Real Jobs campaign is part of a citywide movement to bring a sustainable food system to campuses. Students are organizing at six other universities in the D.C. area: Trinity, Gallaudet, Howard, George Washington, Georgetown, and Georgetown Law, and gaining momentum at Catholic University.

Currently, all six universities’ food service workers are unionized with UNITE HERE Local 23, and several, including AU, are in contract bargaining. Catholic University will begin negotiations in a few months.

“Sustainability” has become a catch-all term to describe food that has an ethical dimension—for the farmer, animal, consumer, or environment. These days, farmers, environmentalists, economists, and even parents and students are talking about what global warming, rising food and fuel prices, and the corporatization of agriculture mean for the world’s future. But for too long, the sustainability movement has ignored food service workers.

By insisting that cafeteria workers have a say in defining what an ethical food chain means, our campaign takes sustainability beyond consumer culture. A job is not sustainable if it can’t provide a healthy future and a living wage.

As part of contract negotiations at AU and the other campuses, UNITE HERE is advancing three proposals to advance sustainable jobs.

One is whistleblower protection. Workers see firsthand what goes on behind the cafeteria’s doors, but if they speak up about anything from food quality to waste to whether ingredients are truly locally-sourced or organic, they risk discipline, even termination.

Workers are also calling for training in from-scratch cooking and ingredients to match, such as in-season produce. This training will enable cafeteria workers to create healthy meals, reduce waste, and begin to re-skill and re-dignify their industry. AU’s food service workers have hundreds of years of collective experience preparing food, and they deserve creative control over their art.

“I want the training to be able to do what you know I can achieve,” said Anthony Randolph, an AU food service worker. He recently testified at D.C.’s city council about his experience with food insecurity, calling for training on scratch cooking.

Although Randolph has worked for Bon Appétit at AU for 11 years, he has struggled to afford fresh, healthy food for his family. Low-wage work often means lack of access to quality grocery stores in workers’ low-income neighborhoods, and when low wages aren’t enough to make ends meet, workers are forced to turn to emergency food providers.

Finally, workers are calling for 40-hour jobs, since fewer hours can’t provide a sustainable quality of life. While most food service workers at AU are considered full-time, they are scheduled only 35-37 hours a week—and only 40 work weeks a year, because of school breaks. Many companies undermine full-time work weeks by using prepared foods, essentially outsourcing some of the food prep. Scratch cooking and the use of fresh foods will create more tasks and positions to sustain truly full-time work weeks.

“We need the time to do our jobs better,” Christine Hamlett-Williams told a Bon Appétit manager during a campaign action last month. “I see the cooks and how hard they’re working to get the fresh quality food out to the students.” Hamlett-Williams has been a cashier at AU for 35 years.

A tragedy of our current food system is that its harmful consequences—an epidemic of diet-related diseases, rising levels of hunger, and lack of access to fresh and healthy food—disproportionately affect the workers who prepare the food, because of their low wages and lack of good health care. Because food service workers have the most at stake, their voices are critical.

Some 22 percent of workers in food preparation and serving occupations live in food-insecure households—meaning that, at some point over the course of the year, they didn’t know where their next meal was coming from, according to 2010 census data. Food workers faced a 31 percent risk of diet-related illnesses like diabetes, stroke, and heart disease—the highest rate of all occupations.

Food workers and their families also rely on federal food assistance programs at rates higher than the national average—SNAP (formerly called food stamps), WIC, which gets healthy foods to women, infants, and children at nutritional risk, and free school lunches.

Historically, the movement has been fractured. Environmental and labor groups have sometimes seen themselves as opponents, not potential allies. The idea is to create a model on campus that could serve as an example for other large institutions.

Campaigners have collected signatures from more than 600 students and 85 percent of Bon Appétit’s AU cafeteria workers on a pledge to publicly support Real Food and Real Jobs. In the D.C. area, more than 1,800 university cafeteria workers, students, faculty, farmers, and community members have signed.

When the campaign went public, workers presented the issues to students in classes and outside cafeterias. Students hung around the cafeterias to educate fellow students and faculty members. Professors facilitated panel discussions. Students and workers joined together for group meals.

After a kick-off meeting in mid-September and events on Food Day in October, AU campaigners sent a delegation to Bon Appétit December 6. About 120 people marched across campus and delivered the 1,800 signed pledges to a nervous Bon Appétit manager.

Leaders from D.C.’s real food movement participated in the delegation. Aja Taylor of Bread for the City said the group appreciates what Bon Appétit does to support sustainable food and fair conditions for farmworkers, but asked for the same effort for the company’s own employees.

Prinz Jones, a line cook at the University of LaVerne near Los Angeles, joined our most recent action. Jones and his co-workers recently went public with their fight to organize a union with UNITE HERE. “We fight,” he told AU workers, “because we too believe in a better and sustainable future.”

Related
‘Progressive’ Food Company Amy’s Kitchen Faces Multiple Unfair Labor Practice Charges »
How Student Workers at Grinnell College Are Winning a Wall-to-Wall Union »
HELU: A National Strategy for Higher Ed Labor »
Teachers Strike against a ‘Heartless’ School Board in Biden’s Hometown »
‘It Feels Like We Started a Movement’: Despite Mixed Results in Frito-Lay Strike, Workers Proud They Stood Up »