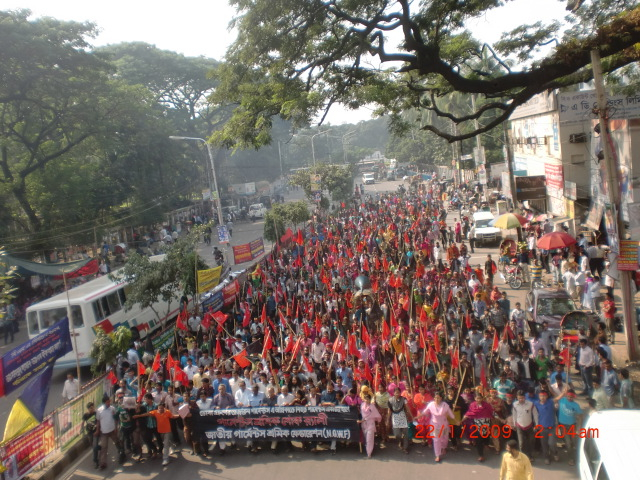 Bangladeshi garment workers marched to demand punishment of the owners responsible for Saturday's deadly fire and for lost earnings for the families. Union rights would help prevent such tragedies, they said. Photo: NGWF.

The National Garment Workers Federation of Bangladesh reports here on a 1,000-worker rally held to protest the deaths of 125 workers in a factory fire Saturday. The garment workers group lays out its demands for justice.

Factory owners, Government, Buyers, and Bangladesh Garment Manufacturers and Exporters Association (BGMEA) should take effective step so that not a single Garment worker in future has to die in factory-fire.

We do not want to see such incident, which workers return to their home as dead body after they came to work. So, the garment factories should be developed as “safe workplace.” Factory owners, Government, Buyers, and trade union organizations should work together for this, NGWF leaders said today.

They said this while addressing a garment workers gathering—before black & red flag mourning & protest procession—organized by National Garment Workers Federation (NGWF) to protest the killing of 125 workers in Tazreen Garment factory-fire at Ashulia.

The gathering was to pay tributes to the deceased workers and demand greater compensation (as per definition of loss of earnings) to deceased workers’ families, necessary medical treatment to injured workers, and developing garment industry into safe workplace. The program was held at 12:00 noon in front of National Press Club in Dhaka city. More than 1,000 garment workers took part in the program.

At the rally the NGWF announced a 7-point charter of demands:

Besides, NGWF is maintaining contacts with the families of the dead workers and injured workers.

For information on the Tazreen factory’s connection to Walmart, read here.