How Chicago Teachers Got Organized to Strike 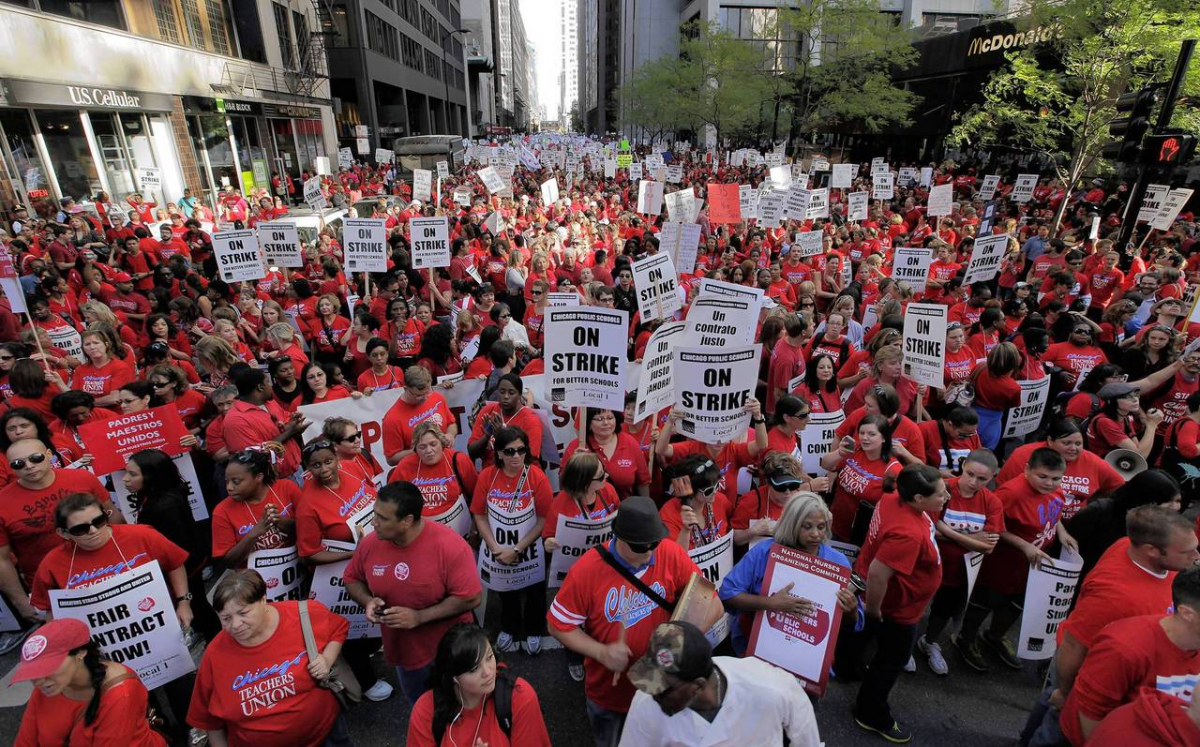 The seeds of the successful Chicago teachers strike began with the election of a new leadership team from a reform caucus in June 2010. Many in the caucus had waged battles going back to 2001 against the school closings that were targeting Black and Latino neighborhoods. Photo: CTU.

Our win was possible because of several years of patient organizing, focused on getting members to step up.

The work began with the election of a new leadership team from a reform caucus in June 2010. Many in the caucus had waged battles going back to 2001 against the school closings that were targeting Black and Latino neighborhoods.

We knew we had to build up the union to be ready to strike, if necessary, to defend our contract and our students. But the vast majority of our members had not experienced any of the nine strikes from 1967 through 1987. Leaders were committed to building a member-driven union to battle alongside parents and students and make our contract campaign one front in a bigger fight to save public education.

To get the members in fighting shape, our first step was to start an Organizing Department, made up mostly of teachers and paraprofessionals who came off the job to work for the union, with each organizer responsible for 100 schools in regional clusters.

We held trainings for delegates (the elected reps in each of more than 600 schools) and other activists, with workshops on contract enforcement, fighting school closings and charter proliferation, ways to fight for funding, how to use research, and engaging parents. Dozens of rank-and-filers spent summers being trained and working in the community in an organizing internship program.

LEADERS IN EVERY SCHOOL

Staff organizers worked to develop leaders in every school. They came to know all their delegates: who had a lousy principal, who rarely ran union meetings, who had their building solid. Organizers ran school meetings to listen to members and activate them, not to “serve” them.

Members knew the threats were real: thousands of layoffs, funding cuts, and anti-union teacher-bashing in the press had made that clear. Organizers’ goals were to educate members about where these attacks were coming from and to convince them that winning was possible if large numbers of us were in motion in the schools, streets, and communities.

Between October 2011 and February 2012 the Board of Education voted to close or “turn around” 17 schools, provoking huge fights that engaged many members and parents. Members showed up for regional union meetings, rallies, forums, alderman and legislator calls and visits, phonebanks, board of education meetings, budget hearings, buses to the state capital, and to testify at hearings on school closings.

The tactics of our coalition were confrontational and escalated throughout the effort. We disrupted and took over a board meeting; parents and community activists occupied a school; and community organizations led a vigil outside the mayor’s home. These actions built members’ confidence in the types of tactics we would use during the strike and provided visible examples of joint union-community action.

In every action, we stressed the big picture: that our fight was about a better school day and getting the resources into neighborhood schools instead of charter schools. We made it clear that the union was not alone, but part of a broad coalition. We called the board’s policies racist and pointed out that, in Black and Latino communities, students, teachers, and schools were set up to fail, paving the way for closings and privatized charters.

Action Committees. A year before the contract expired, we started up Contract Action Committees in each building. Each committee member was responsible for communicating with about 10 employees face-to-face, including teachers and paraprofessionals, as well as the engineers, security staff, and lunchroom workers in other unions.

The message was always for members to build their own local activities and reach out to parents and community, particularly through the local school council meetings.

The committees circulated an open letter for parents and teachers to sign. The letter said that, if we were going to have a longer school day, it must be a better school day, with a rich curriculum, more social workers and counselors, and high-quality facilities.

This letter helped committee members develop their organizing skills by talking to every CTU member in their building, and it built their confidence at engaging with parent leaders.

Developing Bargaining Demands. To develop our demands, we went to our 28 existing member committees, which cover topics like early childhood, substitutes, special ed, testing, and many more. Each committee came up with demands, and we gathered additional input at regional union meetings. Demands were finalized in our Professional Problems Committee with lots of rank-and-file involvement.

Regional Meetings. We held after-school regional meetings, open to all, at multiple locations around the city. Whenever a big issue came up, such as the anti-union “Performance Counts” legislation in late 2011, we emailed members to come listen and say what they thought.
We also held regional meetings specifically for the often-neglected paraprofessionals.

Phonebanking. We made it a point to phonebank members who were new, those who were the lowest paid and the least protected, beginning at the start of 2012. Members trained by the organizing department (sometimes volunteering and other times paid) described what the board was doing, heard members’ thoughts, and projected a vision of how we could win.

In these calls members were asked to do something—such as come out to our big rally, attend a training, get involved in their school’s contract committee, or fill buses to the state capital. We tracked how willing they were to vote for a strike.

Bargaining Team. We convened a big bargaining team—30 members drawn from all sectors, seniority ranges, job categories, and caucuses. This happened right after we took office because we had to bargain over the layoffs of 1,500 members. We brought in the best leaders from other caucuses, which worked well to create buy-in and cooperation.

Special Report. Our research department produced a 45-page report with graphs, charts, photos, and data—The Schools Chicago’s Children Deserve—that projected a vision in which every child, regardless of her parents’ income or zip code, would get a world-class education.

This report was pivotal in building support, both within our ranks and among parents. We circulated it everywhere, among parents and politicians, education experts and the press. It called the Chicago system “educational apartheid.”

That crucial phrase, regularly used by union leaders, helped show that the union was on the side of Black and Latino children and was willing to be direct about it. Jesse Jackson picked it up. The report made it clear to anyone what CTU was fighting for, and backed it up with research showing what children need.

We also distilled the report into a 10-point one-pager in English and Spanish and took it to every meeting.

In 2011 the Illinois legislature passed a law that the CTU would need the votes of 75 percent of all members (not just of those voting) to call a strike. To beat that threshold, we couldn’t go into the vote cold.

Practice Vote. We wanted to vote before the school year was over, while the issues were hot and members were having daily conversations with each other. We took a dry run May 10. Members at their schools took a four-question poll with questions that would elicit a yes (“Do the Board’s bargaining proposals disrespect CTU members?”).

This practice vote allowed us to test our machinery and signal to members that a strike vote was coming. Rank-and-file leaders had to drive turnout on a scale they had not experienced before.

Ninety-eight percent rejected the board’s proposals, with 21,000 of 26,000 members participating—showing that the contract campaign had worked.

Even before this, when organizers went out to schools for meetings, we would ask for a show of hands on “How many would vote for a strike?” And spontaneous “mock” strike votes were bubbling up from the membership, simply because they were so angry at the board. We would get calls from delegates: “My staff met yesterday and we voted 98 percent to strike.”

Rally. On May 23, after many phone calls, emails, and school meetings and three weeks before school would end for the semester, 7,000 members wearing their red CTU t-shirts swarmed downtown to a march and rally.

Our signs said “Yes to Respect,” “Yes to Smaller Classes,” and “Yes to Student Needs.” The huge turnout bolstered the rising mood of exhilaration and power. Teachers sang along to Dolly Parton’s “9 to 5” and Aretha Franklin’s “Respect.” Two parents and a high school student gave stirring speeches.

When President Karen Lewis, a veteran science teacher, spoke, a chant went up: “Strike! Strike! Strike!”—led by members, not the officers.

The march merged us with Stand Up Chicago, a union-sponsored group that stages militant actions against millionaires and bankers. Thousands of Stand Up protesters and the downtown public greeted CTU members with cheers and support, helping win over those who had been fearful of public reaction if we were to strike.

“I’ve never been so proud of being in the union,” people said afterwards.

Strike Vote. The tremendous energy of the rally propelled us to the strike authorization vote, with a delegate in charge at each school and a secret ballot. A worker center ally recruited clergy to observe the vote count in anticipation of Board of Ed accusations of fraud.

After two years of preparation, 90 percent of teachers—and 98 percent of those voting—voted to authorize a strike.

Norine Gutekanst is a former third-grade bilingual teacher who now heads CTU’s Organizing Department. For much more on the reform movement in the CTU, their fights against school closings, parents’ involvement, and the strike, see more Labor Notes articles listed below.