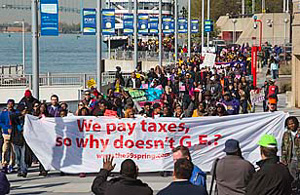 Protesters came to Detroit to let GE shareholders know how they feel about the company's tax avoidance. Photo: Jim West.

At least 2,000 people assembled in downtown Detroit this morning outside the General Electric shareholders meeting to demand that the giant multinational pay its fair share of taxes. Signs read, "We pay taxes, why don't you?"

General Electric paid no federal income taxes the last three years—and received a refund of $4.7 billion for that time.

Picketers came from as far away as Milwaukee, Chicago, and Pittsburgh. The Service Employees had by far the biggest visible union presence, followed by the Food and Commercial Workers. GE retirees from Louisville were picketing for cost-of-living on their pensions, and planned to go inside the meeting.

GE has been under fire for months. The company’s tax avoidance, multiple plant closings, and attacks on its workforce—including forcing one plant to take a 50 percent cut in wages—have sparked a wave of organizing and protest.

In Detroit, SEIU equipped some members with jackets and ties, preparing them to play the 1% in a game of “tax dodgeball” with the 99%. But once the march to the Renaissance Center (which is also the headquarters of General Motors) got started, no one seemed interested in dodgeball.

The crowd made an attempt to enter the iconic Detroit building, but swarms of police on horseback intervened.

The crowd included Occupiers, SEIU home care workers from Bay City, Michigan, and a bus from Toledo with both SEIU members and anti-nuke protesters. GE makes nuclear plants, including one in Michigan that is the same design as the six reactors at Fukushima in Japan.

Some Auto Workers members were present, but UAWers had received an email the day before that said, “Hey LET’S Blend in with the everyday crowd and not wear any UAW insignia.” The Detroit News had reported earlier that the UAW was under pressure from political leaders not to “embarrass a city and state struggling to attract business and investment.”

After shouting at GE for a while, the huge crowd completely filled the main downtown street, curb to curb. One lone cop got on his car's loudspeaker and repeated "everyone on the sidewalk" over and over. When he started driving toward the crowd, the protesters ignored him, so he gave up and backed out of the street.

One observer noted that many of the marchers seemed to be first timers, fired up about GE’s tax avoidance.

At one point a well-dressed African American man emerged from the doors. He said he was a GE shareholder who had stood up in the meeting and said GE should pay its fair share—and was grabbed by the police.

Jim West is a Detroit photographer and the former editor of Labor Notes.