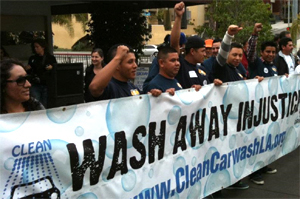 Southern California car wash workers succeeded in their three-year fight for a union and a contract last week, becoming the first group of such workers to organize nationwide.

Thirty car wash workers settled their first contract October 25 and eagerly joined the ranks of Steelworkers Local 675, after years of dedicated member-to-member and community organizing. They work at Bonus Carwash in Santa Monica, outside Los Angeles.

The workers are also members of the Community Labor Environmental Action Network (CLEAN), a community-based coalition of nonprofit organizations the Steelworkers (USW) backed. It has played a key role in organizing and educating car wash workers on their collective rights and helping mobilize local community support.

Car wash work is hard, rife with wage theft by owners, forced overtime, and paltry wages that often fall below minimum wage. Workers, predominantly male Latino immigrants, deal with caustic chemicals with little to no protective gear such as gloves and boots. Often even workers who are hired “full time” show up to work, sit around for a couple of hours, and get sent home. Nothing is guaranteed.

Workers report back pain from bending over to dry and buff cars, foot fungus caused by constant exposure to dirty water, and cracking and blistering of their hands from exposure to cleaning chemicals. It’s “part of the chamba,” or job, said Rogelio Herrera, a former employee at Marina Carwash in Venice.

Los Angeles is home to 500 car washes, the most of any large city in the U.S., say union organizers. It’s also the site of many labor-community collaborations in organizing, so there’s little surprise that union interest is high there.

Each Southern California car wash averages around $1 million profit per year, according to a 2008 CLEAN report.

But most of LA’s 10,000 car wash workers take home just $30 to $40 a day, because many work for no wage at all—just tips—or are paid a flat rate, no matter how many hours they work. Both these practices are illegal.

The two-year agreement approved by members last week sets wages at the state minimum, $8 an hour. Herrera says workers consider it a victory to have stabilized their income, and notes they now have a grievance process, guaranteed breaks and water, and health and safety protections.

Achieving a union contract brings hopes for increased gains in an industry that until now remained completely unorganized, Herrera said.

Another former worker, Juan Torrez, said the victory galvanized other car washers.
“Now the gates are wide open,” he said.

One Member at a Time

Torrez said the organizing has been a slow, hard fight.

“Getting paid on time or at all was such an ordeal,” he said. “The boss had come up with a raffle system where numbers were handed out. If you got the top five you were paid on pay day, but if you landed on 35 you might wait a couple of weeks to get paid.”

Fed up, the workers at Marina decided that if they weren’t paid, they would pull a work stoppage. They built support on and off the job, and decided on a three-hour wildcat during a shift with eight workers in 2008.

“They just walked to a wall, put their backs to it, and stopped working,” said Torrez, who is now a field organizer with Local 675 in charge of developing leaders in the newly formed union.

“The boss came out and said he would pay, but never did,” he added. So the car washers returned with the support of USW organizers and their community allies at CLEAN.

“We did a picket and shut the workplace down,” Torrez said. “The boss went to the bank and paid us on the spot. It was the start of everything.”

The CLEAN campaign grew out of a 2004 state law that gave car wash workers an expedited means to pursue claims against abusive owners.

Organizers got the word out about the Car Wash Worker Law by distributing bottles of water, complete with legal standards for pay and breaks (and a pitch to join up) printed on the side.

A 2010 investigation by the L.A. County district attorney led to 172 charges of criminal and labor-law violations against two brothers who owned four car washes. They were sentenced to a year in jail and ordered to pay workers $1.25 million—a judgment attorneys called the biggest wage-theft prosecution in the nation.

The Steelworkers’ eventual aim is to bargain with the car wash owners’ association, to lift standards across many employers at once.

The strategy morphed from a legal approach to recover stolen wages to a wider push to raise standards, because “workers could file wage and hour claims until they were blue in the face and it wasn’t going to permanently change conditions in the industry,” said Chloe Osmer, acting director of CLEAN.

The 30 workers at Marina Carwash in Venice voted for the union, too.

But they were laid off when the owner—who also owns the Santa Monica car wash—decided to close its doors last December in response to the organizing.

The owner has until the end of this year to decide whether he is going to reopen the Marina Carwash with unionized workers, or sell it off.

Rosemarie Molina, an organizer with CLEAN, says the union has a successorship clause in its contract that guarantees the job will be union regardless of who opens up the shop.

Torrez said the former Marina workers are ready to get back to work.

“They fought hard for their union,” he said. “They are very eager to get to the business of building and expanding the union’s efforts to raise standards in the industry.”

A version of this article appeared in Labor Notes #392, November 2011. Don't miss an issue, subscribe today.
Related
This Year, Let's Coordinate Our Contract Fights to Bargain for the Common Good »
Employers Are Using the Crisis to Push Concessions They Don't Need »
Striking ATI Steelworkers Hold the Line for Premium-Free Health Insurance »
The Grocery Companies Denied Us Hazard Pay—So We Went Over Their Heads »
Copper Workers Strike to Stop Concessionary Trend »