Labor Protections in Trade Deals Are a Cruel Joke 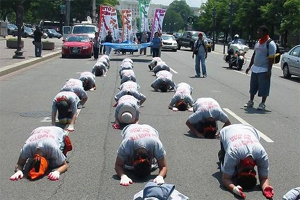 It’s a cruel joke that Democratic politicians are trotting out language about “labor standards” to defend imminent trade agreements with Colombia, Panama—and Korea, which these Korean unionists protested. Experience with previous trade deals makes it obvious global brands like Walmart like the current sweatshop system just the way it is. Photo: KCTU.

It’s a cruel joke that Democratic politicians are trotting out language about “labor standards” to defend imminent trade agreements with Colombia, Korea, and Panama.

President Barack Obama sent Congress all three deals Monday, and lawmakers are expected to move quickly to approve them before the Korean president arrives October 13.

If legislators OK the deals as they stand, they will have learned nothing from previous trade pacts. Just look at the labor rights requirements in the 2001 U.S.-Jordan Free Trade Agreement.

These “protections” include boilerplate “core labor standards” on non-discrimination and rights to organize and bargain.

The stalwart anti-sweatshop team of Charlie Kernaghan and Barbara Briggs at the Institute for Global Labor and Human Rights uncovered a different story on the ground.

They reported last year that in one Jordanian factory, 1,200 guestworkers from Sri Lanka, Bangladesh, and India—75 percent of them women—had been trafficked, stripped of their passports, and held under conditions of indentured servitude.

Workers had been cheated of their promised wages, earning an average of just 35 cents an hour. The minimum wage in Jordan is 74.5 cents. The women were paid, at most, just $35.77 a week. The “labor rights” protections of that trade agreement proved an empty promise.

Why are the garment factories in the Middle East kingdom of Jordan filled with Asians, when Jordan’s unemployment rate is 30 percent?

The answer, as in so many countries, is that the factories that supply the global brands like Nike, Target, and Walmart can pay foreign workers less and—being “guests”—they are less likely to make trouble. Those that do make trouble are given the boot.

The Jordanian workers are not alone. All over the world, guestworkers toil far from their homes, often in conditions that resemble indentured servitude.

The issue of workers transported abroad has remained below the radar for years.

Throughout the last decade, a “perfect storm” developed: lucrative fees to brokers for delivering workers (often triple what laws allowed); growing demand for workers and relative impunity for brokers; bigger profits and malleable “host” governments; and complacency on the part of the buyers, the brands.

Sometimes guestworkers are unwilling guests. Trafficking—defined as workers being duped or sent against their will into jobs abroad—has exploded around the world as globalization has made national boundaries far more permeable and changes in the global financial system have made illicit money transfers far easier.

The United States has spent more than $800 million on programs to combat trafficking since 2003—to little effect.

California is trying to fight trafficking through a sunshine law. The shoe, apparel, toys, and electronics giants will have to cook up something new to comply with a new state law coming into effect January 1 that insists they report on trafficked workers in their supply chains.

Don’t get your hopes up: Nike’s feckless “responsibility” team—now numbering at least 210 employees—still goes around lamenting the fact that Nike HQ is powerless to control its suppliers.

For example, this year was the target date the company had set for ending forced overtime at supplier factories. Promises are easy to make, especially when no one’s going to hold you to it.

So consumers in the United States still buy products made by sweatshop workers, some of them trafficked, every single day. Since U.S.-based brands are the mainstay buyers for these factories, why are Americans not better informed about workers’ conditions?

The brands are complacent partly because they can easily deny that that they buy from sweatshops. All they have to do is adopt a simple code of conduct for supplier factories, promising to respect workers’ rights.

Enforcement is a matter of “social audits,” with inspections often announced ahead of time. The standard is often “follow local laws,” which are weak.

But dozens of these global brands tout their “social responsibility” and publish extensive (if not particularly informative) “factory social audits” on their corporate websites.

But not one communiqué dealt with the issue of substandard wages, even though huge fights over wages are boiling throughout the apparel-producing world.

Tens of thousands of workers in Bangladesh and Cambodia protested and struck repeatedly last year over expected adjustments to the national minimum wage delayed for years—and which made pathetically little headway toward a “living” wage when it arrived in Bangladesh.

The unrest continues, despite repressive government intervention. A massive strike involving tens of thousands roiled a huge factory producing for adidas in Vietnam earlier this year. The workers demanded an end to low wages and an unfair bonus system.

An Australia-based monitoring group feared for the strike leaders: Last year three young Vietnamese activists were handed prison sentences of seven to nine years for their involvement in a shoe-factory strike.

What can U.S. unions—and consumers—do to fight trafficking and the abysmal workplace conditions it creates?

We could learn a few lessons from anti-sweatshop campaigners. Even in the midst of a global economic downturn, diligent research by U.S. anti-sweatshop groups combined with determined activism on the part of wronged workers in Cambodia brought a measure of justice.

After a factory fire in March caused a textile company to close, the company refused to pay 4,000 workers the $600 to $700 in legally required severance they were owed. (None were injured in the blaze.)

They were two of the brands that purchased the factory’s goods. The WRC brought in the International Labor Organization and other international bodies, and before long the supplier was forced to follow the law—producing a $2.4 million settlement.

The WRC called it “the largest case so far in which labor rights monitoring efforts have succeeded in overcoming an attempt by garment factory owners to evade payment of legally owed compensation to workers.”

We know that including labor rights language in trade deals hasn’t stopped global corporations from exploiting workers and whitewashing their records with “social responsibility” baloney. So what can? Strong unions, pressure groups of consumers, and truly independent factory monitors are an imperfect—but far better—combination to hold them accountable.