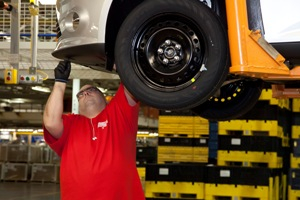 At this Ford Focus plant in Wayne, Michigan, workers rejected a proposed contract, but it was approved overall despite having no bridge to higher wages for second-tier workers. Photo: Jim West.

Ford workers ratified a new contract by 63 percent in mid-October. Their deal was patterned after the General Motors agreement, which passed by about 64 percent but contained smaller bonuses.

Though the contract secured thousands in upfront money, UAW reformers campaigned against it because it provides no bridge to first-tier wages for second-tier workers. First-tier wages are frozen for four additional years and bonuses will not come close to recovering losses from years of concessions.

At a Kansas City plant, officials warned that if workers voted no, Ford could “choose bankruptcy.” Ford is solidly in the black, recording $5.7 billion in profits thus far this year.

At the Dearborn Truck Plant, one appointed rep spread the (false) word that Ford had announced it would not go back to the bargaining table, which would be illegal. “If we go on strike a lot of people are going to lose their homes,” he said somberly.

The national union said a “no” vote would mean a strike and that Ford would hire scabs. An official later retracted the second remark.

Although Ford members took the usual strike votes in their locals, nothing had been done to prepare for a strike. “It’s sad,” said retiree Ron Lare. “A strike is supposed to be the union’s threat against the company and now it’s used as a threat against the membership.”

Ford workers were the only Detroit 3 workers who had the right to strike, as GM and Chrysler are operating under no-strike agreements imposed by the federal government during the 2009 bailouts.

In fall 2009, the Ford rank and file overwhelmingly voted down concessions the UAW had designed to bring Ford workers down to the GM-Chrysler bailout pattern.

The Autoworker Caravan group circulated a leaflet that warned, “Ford is rolling in profits and Wall Street is tickled to see this contract.”

There are very few second-tier workers at Ford but about 2,000 temps, some of whom have worked there for years. A majority of temps, those at three plants and one that is closing, will get the chance to convert to permanent second-tier status.

The rest will remain in limbo. One Detroit-area temp, who asked not to be named, has bounced among eight Ford plants since 2002, his wage rising as high as $24, only to fall to $14. Nearly a decade later, “I never imagined that I’d still be a temporary employee at Ford,” he said.

Judy Wraight, an instrument repairperson at Ford’s Rouge complex, pointed out that the $1,500 bonus is the equivalent of just three of the smaller concessions workers made in 2009 (one holiday, less daily break time, and a Christmas bonus).

Other, larger concessions—a wage freeze in place since 2005, the 99 cents-per-hour wage cut workers took when they gave up the cost-of-living allowance, and cutbacks in overtime pay—were not redressed.

The agreement with less-healthy Chrysler announced October 12 includes only a $1,750 signing bonus and $500 annual bonus. Second-tier workers there are projected to become 25 percent of the workforce.

Auto execs are clear that they want to shift all workers to second-tier wages eventually.

GM CEO Dan Akerson said that although “we don’t need to get there tomorrow,” his aim is to replace higher-paid workers with those starting at the new contract’s $15.78.

But incentives for older workers to retire shrank. The contracts fail to increase pensions, for the first time ever, and erased a small Christmas bonus for retirees.

The least tedious and best-paid auto jobs, in the skilled trades, will shrivel substantially. Scott Houldieson, an electrician at Ford’s Chicago assembly plant, said the contract speaks of “apprentice-style training” for certain production workers, which will mean turning over more work to lower-paid workers.

The UAW says Ford will invest to create 5,750 new jobs in five states, but the reformers counter that this is investment Ford had already planned. Plus, they ask, “what does the record tell us about promises like that? Every contract for decades has been presented as a ‘job security contract,’ but UAW-Ford has lost half its membership since 1999.”

Local 900 member Dave Dogonski, at a Ford plant west of Detroit, described himself as a fence-sitter who had voted yes. “I would like to have voted no in order to make a political statement,” he said. “How can the union in one breath support things like Occupy Wall Street but at the same time let the corporations take windfall profits and not get us a raise?”