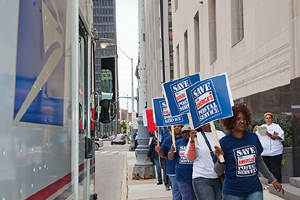 The nation’s postal unions organized events at 492 locations across the country Tuesday in support of federal legislation that would relieve the burdensome requirement that postal employees pre-fund decades worth of retirees’ benefits. photo: Jim West | jimwestphoto.com.

The nation’s four postal unions organized events at 492 locations across the country Tuesday in support of federal legislation that would relieve the burdensome requirement that postal employees pre-fund decades worth of retirees’ benefits.

The bill (HB 1351) currently has 216 cosponsors in the House, but President Obama’s latest position would grant the Postal Service only a two-year reprieve. Obama also recommended killing Saturday delivery, which postal unionists say would create a “death spiral” for the service. The Postal Service is proposing to close 3,500 post offices and lay off 120,000 workers, breaking its new contract with the Postal Workers union.

Chanting, “One – Three – Five – One, Congress get the job done,” and “We don’t want a bail out, we just want the mail out,” postal workers in southeast Michigan withstood a rainy afternoon to demand Congressional action.

“True to form, rain or shine, we’ll be here,” said Cornell Fears, a member of Letter Carriers Branch 1 in Detroit.

Some of the largest protests were reported in Melville and Buffalo, New York; Journal Square, New Jersey; and Eugene, Oregon, where hundreds gathered. Fifteen hundred turned out in Boston.

Sally Davidow of the Postal Workers (APWU) reported that Tom Reed, a freshman Tea Party Republican from Rochester, New York, announced he would sign on to the bill after a big rally Tuesday.

North of Detroit, 200 pressured Republican Representative Candice Miller to sign on to the bill.

Letter Carriers Branch 3126 member John Dick was encouraged by the rally of 60 he attended in Troy, Michigan.

“There was a lot of new faces I’d never seen before,” said Dick, referring to his co-workers. “It was the first rally they’d ever been to. They’ve been awakened as to what’s going on.”

Dick said the events educated the public about the real reason the Postal Service is in the red: not a surplus of workers or post offices but a 2006 law that requires it to put away enough money, over 10 years, to fund 75 years of retiree health benefits—about $5.5 billion each year.

“It’s not an easy thing to wrap your fingers around,” he said, but “more and more people are getting it.”

The AFL-CIO is planning a national week of action October 10-16 as part of its “America Wants to Work – Good Jobs Now” initiative. The week will focus on creating new jobs and preserving the good jobs we have—including those in the postal service and at Verizon and Hyatt, where unions are fighting for good contracts and organizing rights. Find a local rally here.