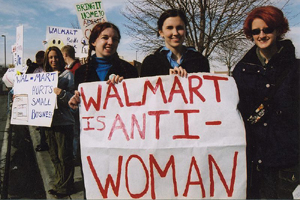 But the court did not rule whether there was sex discrimination against the 1.5 million women represented in the 10-year-old lawsuit. The ruling was five to four, with all three of the court’s women joining the dissent.

Lead plaintiff Betty Dukes said she was disappointed to lose the ruling, adding that Monday’s ruling “is a battle; it is not the war.”

Lawyers for the workers said they will pursue other options to redress discrimination, including thousands of individual suits and claims before the Equal Employment Opportunity Commission.

“If it takes us to go one step at a time, one woman at a time, we will go forward,” said Dukes, who works at a Wal-Mart in Pittsburg, California.

The lawyers said they saw “wiggle room” in the decision which will allow narrower class action suits, in particular stores or regions. But the ruling will significantly increase hurdles for workers who want to sue a corporation as a group.

Dukes saw the ruling as part of an offensive by corporate America, pointing to other corporations that filed briefs in support of Wal-Mart’s appeal. “Many of us lower paid hourly workers and even salary workers are going to have to come together and protect ourselves,” she said.

A union could watchdog discrimination and enforce fair pay standards, but Wal-Mart has made a science of creating a union-hostile workplace, quickly dispatching “union avoidance” teams to any store where union talk emerges. When Wal-Mart workers do vote union, the company has closed the department or store in retaliation.

The court’s pro-corporate majority has been chain-sawing laws that defend the less powerful against the corporate class.

The same five justices who backed Wal-Mart formed the majority in the Citizens United case, which allowed corporate cash to swamp elections.

The workers’ lawyers said the decision overturned 40 years of precedent. It also overturned a series of rulings, culminating in the Ninth Circuit Court of Appeals, validating the class action suit.

“For a number of women, this’ll be the end of their claim,” said Joe Sellers, an attorney for the workers. “They will lose their day in court.”

The court’s decision hinged on whether the giant retailer could be held liable for things done by managers in thousands of separate discriminatory promotion and pay decisions. Wal-Mart said they gave discretion to their managers in hiring, and had a general non-discrimination policy.

The workers’ legal team argued that there was a discriminatory ideology, promoted from the top and throughout the company, which led to sharp disparities in pay and promotion between men and women in stores throughout the country. When the suit was filed in 2001, women made up 70 percent of hourly workers and only 33 percent of managers.

Managers told workers that men made more than women because “gentlemen have a family to support.” Upper management told store managers to answer questions about why more men are in management by saying “men are more aggressive in seeking promotions.”

But the majority of the court agreed with Wal-Mart, which said that the women who were suing did not have enough in common, since they had different managers at different stores in different regions.

“We’re not done with Wal-Mart yet,” said Christine Kwapnoski, a Sam’s Club worker in Concord, California. “We’re still fighting, even though we cannot move forward as a class, in one solid voice.”

Lawyers fear that the ruling will make it harder for workers to get justice in the courts. There is a series of cases in the pipeline, including a class action suit against Costco alleging discrimination against women in promotion of managers and assistant managers.

The court “created new standards, significantly different from what we understood the ground rules to be in the past,” said plaintiff’s lawyer Brad Seligman.

Class action suits are particularly important in discrimination cases where the monetary damages each worker could recover max out at several thousand dollars, small enough that most lawyers would not pursue individual claims.

For a giant employer like Wal-Mart, however, the benefits of discrimination can add up to serious money. The suit was asking for billions in back pay and damages.

While Wal-Mart changed some of its policies after the suit was originally filed, Kwapnoski called the moves “just a Band-Aid,” and said managers found ways around the new policies.

Dukes said after the suit was filed, suddenly jobs that had been filled in secret were publicly posted and managers at her store made a point of telling workers how to apply.

Wal-Mart also made a one-time pay adjustment for women workers. But with the court’s ruling, Dukes said she worried Wal-Mart would go back to the “good old boys’ way.”

A raft of complaints among Wal-Mart workers has led them to organize a new group, Organization United for Respect at Wal-Mart (OUR Wal-Mart), with the assistance of the Food and Commercial Workers union.

One hundred members protested at the company’s headquarters in Bentonville, Arkansas, last week. They said they were seeking to redress grievances through a “partnership” with their employer.

OUR Wal-Mart does not call itself a union, but the group’s founding statement hits many familiar themes: unaffordable health care, unpredictable scheduling, low wages, and management disrespect for worker recommendations and initiative.

The effort is the latest attempt among Wal-Mart workers to develop some form of collective voice and power at the company. The UFCW has put money into the effort, part of their longstanding campaign to improve working conditions at Wal-Mart, which employs 1.6 million workers in the U.S.

Related
Book Review: A History of America in Ten Strikes »
Philadelphia Union Wins Equal Pay for Immigrant Nurses »
Solidarity Is Key to Beating Trump's Divide-and-Conquer »
SeaTac's Fight for 15: Why Faith Was Key »
Out of the Closet: A Sanitation Worker Fights Discrimination »
Supreme Court Sides with Wal-Mart, Raises Hurdles for Workers’ Lawsuits A massive sex discrimination suit against Wal-Mart cannot go forward, the Supreme Court ruled Monday. But the court did not rule whether there was sex discrimination against the 1.5 million women represented in the 10-year-old lawsuit. The ruling was five to four, with all three of the court’s women joining the dissent. Women Wal-Mart workers charged that men were consistently paid more and reg...