How to Monitor the Monitors 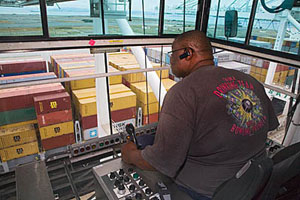 A crane operator at the Port of Oakland. On the docks, monitoring technology allows management to know exactly what crane operators, truck drivers, and maintenance workers are doing at all times. Photo: Jim West.

They are watching us.

Monitoring technology lets management see what we’re doing, when and how we’re doing it, and how long it takes.

UPS drivers, for example, are watched by a “telematics” system that continuously gathers more than 200 data points. From how fast they are going and how often they drive in reverse to whether they have their seat belts fastened and their doors locked, management has access to a detailed electronic map of a driver’s day.

On the docks, monitoring technology allows management to know exactly what crane operators, truck drivers, and maintenance workers are doing. By tracking containers, monitoring allows the boss to limit the number of “extra” moves and feed that information into scheduling programs that ensure the minimum number of workers, with the right skill levels, are on the clock.

In health care, nurses and others are outfitted with badges that track their location, sending information to a central computer when they pass near sensors.

And anyone who works at a computer or operates a computer-controlled machine can be, and probably is, monitored.

Technologies make it easier for management to intrude into, and therefore control, our lives at work. They are monitoring us because they can, and because we haven’t stood in their way.

From GPS transponders that track mobile equipment in the yard or out on the highways, to active badges that report an individual worker’s location throughout the workday, the range of technologies is growing fast.

Video cameras, rapidly decreasing in size and expense, are appearing both inside and outside the workplace, often with no notice. Barcode readers, like the ones used in grocery stores, gather information on employees as well as on the items being sold.

Palm prints, thumbprints, and retina scans identify workers, gather information on their activities, and ultimately control what they do. Swipe cards, radio frequency identification (RFID) tags, and real time locator systems are all part of the arsenal.

Monitoring is now so common that some people believe they’re being monitored even when they aren’t. I was interviewing teachers about the use of technology in education, and noticed that whenever they said anything negative about the software or hardware they were forced to use, they lowered their voices.

But even if they aren’t having their conversations taped, many parts of their school are constantly watched with video cameras. Teachers’ e-mails are monitored and they reported that negative comments about school operations, including about technology, lead to a quick response and a reprimand.

So why is management so interested in keeping such a close eye on workers? And what does this mean for the union?

The big myth is that monitoring is primarily designed to catch “cheaters”—people who take too long in the bathroom, who wander where they “shouldn’t” (including on the internet), or who aren’t doing their work, or enough of it. As a result, much of the contract language, where it exists at all, is about limiting the use of monitoring information for discipline.

Monitoring is indeed used to catch people doing things management doesn’t want them to, which increases the amount of discipline stewards have to deal with and the difficulty of protecting those who get caught—video and computer printouts are hard to counter in front of an arbitrator. Members need to understand what monitoring is capable of, clearly.

But this view leads some to think that if you’re doing your job, you don’t have to be concerned. That misses the point. Management doesn’t spend the kind of money it spends on monitoring just to catch a few slackers.

Managers monitor to gather data and then analyze the work process and intensify it. They use data to cut corners, speed workers up, increase stress, and eliminate jobs.

Monitoring is also used to enforce standardized work. In call centers, scripts are imposed on workers and monitoring is used to ensure they don’t stray from them.

In other words, management monitors to squeeze more work out of us and exert more control over us. Everyone is affected.

HOW TO COUNTER IT

What do we need to do about this?

Too often, monitoring is implemented without notification to the union. Unless someone is actively watching management, leaders may not find out about new monitoring technologies until someone is disciplined or gets a poor performance review. In other words, after the monitoring is fully installed.

As the eyes and ears of the union at the workplace, stewards should involve members in gathering information about monitoring and figuring out a union response.

The union needs to make an official request to management for information, which then leads to bargaining. Stewards can put together questions for the request. It should include:

We can bargain over how much information is gathered, who sees it, and how it’s used. Remember, when it comes to the challenges of the changing workplace, “If you’re not at the table, you’ll be on the menu.”

Charley Richardson is a labor educator. Contact him with information and questions about monitoring at richardson [dot] charley [at] gmail [dot] com.

A version of this article appeared in Labor Notes #386, May 2011. Don't miss an issue, subscribe today.
Related
Interview: 'Things Shouldn't Be Like This': Why One Amazon Driver Walked Out on Easter »
UAW Just Agreed to Let Ford Use Technology to Monitor Assembly Workers »
Bangladesh Accord Gets a Lifeline While Workers Organize Wildcat Strikes »
Big Brown Waves White Flag »
Lean Production Hits Public Education »