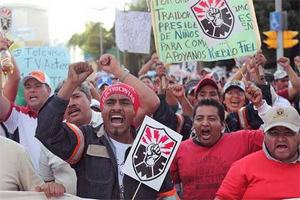 Independent unions in Mexico, including the embattled electrical workers (SME), forced legislators to shelve their union-busting bill with weeks of protest. Photo: COLESLU.

Tens of thousands demonstrate for weeks against a right-wing attempt to destroy union rights in the legislature. They appear to have stopped the bill, at least for now.

No, this is not Wisconsin but Mexico, where employers and the official government-connected unions joined with a center-right party (the PRI) to push a law that would virtually dismantle workers’ rights despite longstanding constitutional protections.

On Friday the Mexican Congress bowed to the marches and rallies, the educational campaigns and lobbying, the support from coalitions such as a human rights network and a pro-democracy lawyers’ group, and announced it would shelve the labor law “reform,” postponing any action until the fall.

On paper, Mexico’s workers have had one of the best labor laws in the world since the adoption of the Constitution of 1917, which gave workers the right to organize unions and established protective legislation.

During the 1930s, industrial, agricultural, and public employee unions became part of what would become the PRI, the ruling party for 75 years. Unions came to serve the party’s interests, not the workers’. Between the 1930s and the 1980s, the state nationalized many industries. Workers often worked for a state company, belonged to the state union, and through their union membership became automatically affiliated to the state party.

Yet, under this system, Mexican workers retained some remarkable conditions, at least in theory and largely in practice: employment at 44 hours a week, with no part-time or temporary work. They receive severance pay if fired, and if a strike is recognized as legal, replacement workers are banned. Strikers are paid for time on strike.

In practice these legal conditions were gradually undermined and deteriorated rapidly by the 1980s.

The legislation pushed by the PRI would have accelerated these changes, however, and further weakened union power and workers’ rights.

The PRI’s bill would have allowed new categories of temporary and casual employment, such as 60-day training periods, 30-day probationary periods, seasonal employment, and other forms of temporary work. It would have allowed subcontracting, reduced the legally required severance payments to laid-off workers, and opened workers to retaliation by forcing them to provide lists of workers voting to strike.

Even where there are union contracts, employers could have offered workers individual contracts with different wages, conditions, and benefits.

The PRI’s attack had the backing not only of its rival right-wing party, the PAN, but also of the Congress of Labor, the official unions’ umbrella organization.

Yet Mexico’s independent union movement, with support from allies both in Mexico and abroad, has succeeded in derailing the pro-employer proposal.

Feeling the pressure not only from opposition at home but from union organizations around the world, where Mexico’s reputation is at stake, legislators announced they would hold more hearings on the bill, pushing a decision into the fall.

Since the 1980s COPARMEX, the most aggressive and political Mexican business organization, has been pushing for labor law changes which, they say, would “modernize” the country and make it more “competitive,” in order to attract more foreign investment and create jobs.

For three decades the conservative PAN party tried and failed to pass versions of this law, calling for “flexibility,” that is, permitting temporary and part-time work.

Now the PRI, which controls Congress and has always claimed to be the party for Mexico’s working people, has embraced an even worse version of the law.

Most Mexican union members belong to one of the “official” or government-backed unions, traditional allies of the PRI, that function chiefly as protection unions for employers. Members may not even know they have a union unless they act up, when the union sends thugs to put them in line. It is these unions, with about 10 million members, that backed the bill.

The independent National Workers Union, however, opposes the measure, as do other independent unions, with a total of about 1.5 million members. (About a third of the workforce is in the informal or black market economy, with no unions, and union density overall is under 20 percent.)

Tens of thousands of members of independent unions, among them teachers and electrical workers, marched against the law in recent weeks. Their leaders, attorneys, and pro-labor academics have spoken at public meetings and educational forums. They’ve testified at government hearings, convened by sympathetic congressional representatives. Andrés Manuel López Obrador, who will most likely be the candidate of the left in the 2012 presidential election, has spoken out strongly against the law and organized demonstrations of his supporters against it.

Just as public employees in the United States see the Republican attacks on labor rights as threatening to wipe out their unions and contracts, so, too, do Mexican workers see the PRI’s labor law overhaul as a frontal assault that could leave in place only government-controlled or employer-friendly unions.

Some fear an emergency session of Congress will be called—just the kind of trick the PRI is known for—and have vowed to keep up the pressure.

Dan La Botz is the editor of Mexican Labor News and Analysis.

Related
The Hows, Whys, and Whats of ULP Strikes »
A New Union, At Last? Mexican Auto Parts Workers Get to Vote, Three Years After Strike Wave »
In a Landslide Victory, Mexican GM Workers Vote In an Independent Union »
Mexican Auto Workers to Choose New Union in Landmark Vote »
Interview: A Mexican Auto Worker on the Fight for a Real Union at GM's Silao Plant »