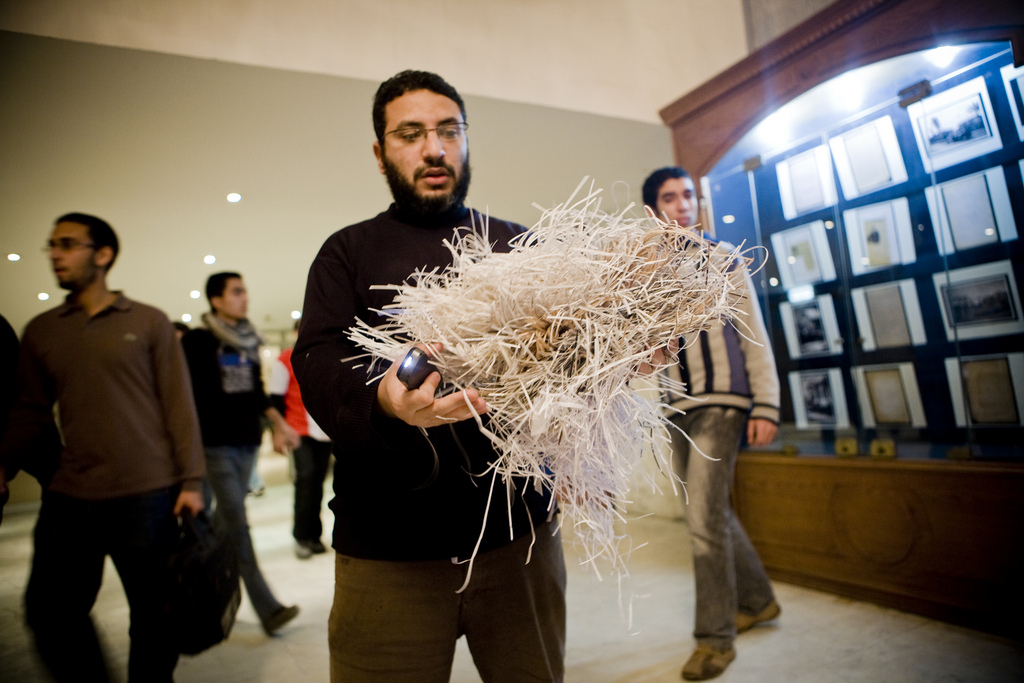 Protesters inside the Egyptian state security building examine freshly shredded documents. Police involved in suppression of the pro-democracy movement, including the killing of protesters, recently got a 100 percent pay raise. Photo: Hossam el-Hamalawy.

The Egyptian military government’s push to ban the right to strike, coupled with rising teacher grievances, sparked protests this week demanding the impeachment of the education minister.

The actions followed worker demonstrations April 8 in Cairo’s Tahrir Square that were met with violent repression.

In a phone interview with Labor Notes, Abdel Hafiz, a leader of the 40,000-member independent teachers union, said the new anti-strike measure is not law yet. Under the anti-strike laws of the ousted regime of Hosni Mubarak, workers could be imprisoned, fined, and fired.

According to Hafiz, protesting teachers sought the arrest of Mubarak, increased pay, better working conditions, and the right for teachers to organize unions independent of the government.

He praised the recent detention of Egypt’s former authoritarian leader.

Hafiz lamented that in the post-Mubarak revolution the security apparatus “still controls everything in education.”

Many teachers were opponents of the Mubarak regime, and the education ministry is still dominated by Mubarak officials. Hafiz noted that political security still watches teachers.

Hundreds of teachers were fired and transferred during the pro-democracy demonstrations, and the union is seeking their reinstatement.

Hafiz said the teachers are seeking to “gain control of their work” and an education ministry free from the vestiges of the Mubarak regime.

The effort to eradicate the security forces from the education system is the “most complicated and important struggle” facing the teachers, Hafiz said.

While Minister of Labor Affairs Ahmed Hassan El-Borai assured Egyptian unionists that the right to organize and form free unions will be guaranteed, he also argued that strikes are “bad for the economy.”

In late March, the New York-based Human Rights Watch slammed Egypt’s anti-union policies, saying, “This virtually blanket ban on strikes and demonstrations is a betrayal of the demands of Tahrir protesters for a free Egypt.”

Hafiz said that police and security involved in suppression of the pro-democracy movement, including the killing of protesters, were recently awarded a 100 percent pay raise. The police pay raises have “turned every worker angry.”

Teacher salaries in Egypt are abysmally low. Hafiz said the starting rate for a new teacher is $20 a month, which rises to $60-$70 after five years on the job. The union is calling for 7 percent raises and wants to close the gap between the highest- and lowest-paid educators.

“Some classrooms have 90 students,” said Hafiz, adding that teachers seek the creation of 33,000 new schools across Egypt to reduce class size to 40.

When asked about Western media reports on the growing influence of the radical Islamic Muslim Brotherhood, Hafiz said the Brotherhood is trying to exert control over the government-controlled teachers union, established by Egypt’s first military ruler, Gamal Abdel Nasser, in the 1950s.

It was the corruption of this government-controlled union that prompted Hafiz and his colleagues to form a teachers union free from government influence.

While largely banned during the Mubarak period, the Muslim Brotherhood is considered the most organized political force in Egypt and is now cooperating as a legal organization with the military government.

Hafiz said that if the Brotherhood attempts to dominate the independent teachers union, it will not prevail, because “our constitution guarantees no discrimination based on religion.” He added that a cornerstone of the independent union’s constitution is democracy and human rights.

When asked whether a labor party is in the works, Hafiz said many groups wanted to build parties. He stressed that democracy is still unfolding.

“Building a country depends on the rules of the game,” he said.

Benjamin Weinthal is a Berlin-based journalist.

Related
Auto Workers Turn a Corner for Strike Pay and Democracy »
Recent Books of Note for Labor Activists »
St. Louis Boeing Plant Workers to Strike »
Every Boss Has a Weak Spot. Find and Use It. »
What Can Unions Do Now to Defend Abortion Rights? »