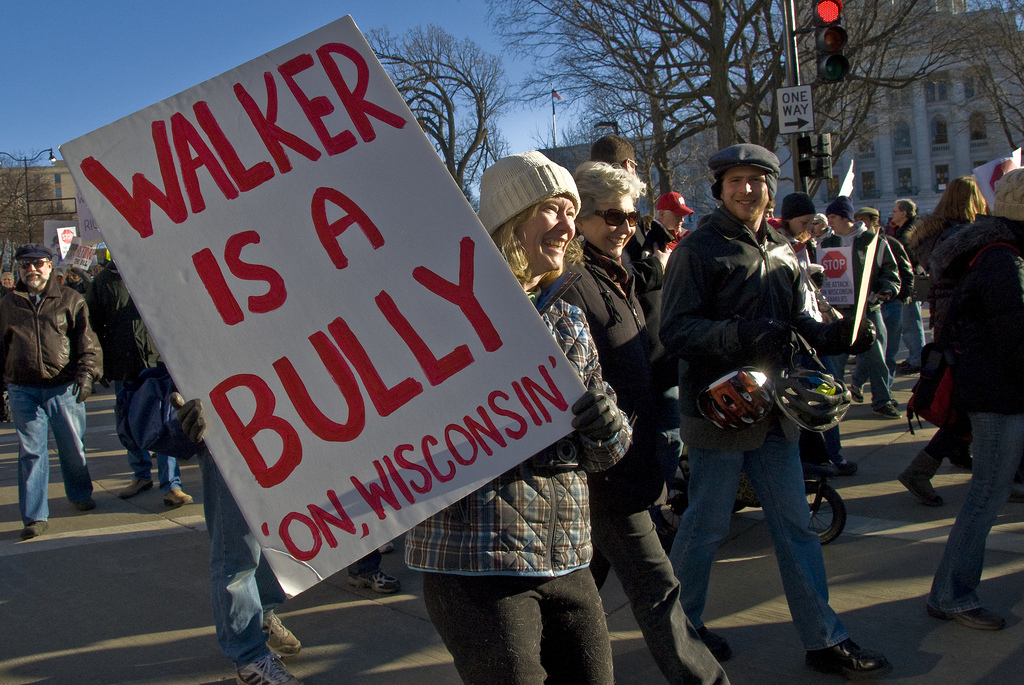 Stunned and outraged, thousands of Wisconsinites forced their way into the Capitol tonight after Senate Republicans passed their bill attacking unions.

The Republicans rewrote the bill to strip out fiscal measures and focus just on attacking union rights and collective bargaining, allowing them to pass the bill without the participation of Senate Democrats.

Republicans didn’t need them because a quorum of 20 is required only for fiscal measures. The bill would cripple public worker unions by ending dues checkoff, mandating yearly votes to maintain the union’s certification, and restricting bargaining to wages, which are tightly constrained. The bill passed without debate, 18 to 1.

“Our house is filling up again,” said Dave Poklinkoski, from inside the Capitol building at 8:30 p.m. Madison time. He estimated that more than 8,000 people had rushed into the building. Poklinkoski is president of an Electrical Workers local at the electric utility.

Every floor is packed and police are threatening to move people out, citing fears for the building’s “structural integrity.”

After pulling their surprise vote, the Republicans tried to sneak out of the building through a side tunnel, but found 500 people waiting for them. “They were freaked out and panicky,” Poklinkoski said. “The state troopers had to create a path for them.”

On an open bullhorn outside the building before protesters went inside, the chants included, “Whose house? Our house!” and “Strike!”

Unionists angrily noted that Governor Scott Walker had insisted that stripping union rights was essential to resolve the state’s budget deficit—until he decided it wasn’t, and rammed through the anti-union measures anyway.

Thousands more are expected to descend upon the Capitol by tomorrow. A recent wave of early retirements among state employees—who left their jobs to protect their pensions—has created a large group of angry workers available to protest.

The Assembly is supposed to meet tomorrow at 9 a.m., presumably to pass the new version of the Senate bill.

Related
How Milwaukee Teachers Beat Back Cuts and Busywork »
Viewpoint: Unions Are Class Organizations, and Should Act Like It »
Iowa’s New Union-Busting Bill Is Worse Than Wisconsin »
In Wisconsin, A Test Case for Right to Work »
Wisconsin, Round Two: As Unions Hesitate, ‘Right to Work’ Advances »

dissidents in the UAW are no fans of that decision, either: http://www.labornotes.org/2010/06/uaw-dissidents-slam-concessions-e-boar...