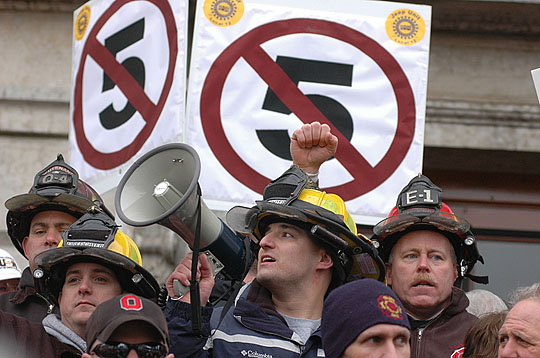 Ohio Governor John Kasich delivered his “State of the State” speech March 8 with all the pomp expected of a new governor setting his agenda.

But 3,000 union members and allies—led by 2,000 firefighters along with teachers, state workers, electrical workers, steelworkers, and many others—had just finished rallying outside the Columbus statehouse damning Senate Bill 5, the governor’s proposal to gut public employee unions.

And now hundreds of protesters packed the hearing gallery, with many more outside, filling the air with boos and “Kill the Bill” chants while the governor spun down-home tales, like one about a young girl who walked up to him during his campaign to say, “Mister, please don’t tax my eggs.”

The governor and the legislature’s Republican majority certainly don’t have moderation in mind. After a little reworking, the senate passed a bill in early March that ends collective bargaining for most state workers, by a 17-16 vote. The assembly was still considering it at press time.

SB 5 allows most state employees—as well as school and local government workers—to bargain wages. But it forbids talks on pensions and health benefits and a score of other topics. Salary step schedules would be replaced with “pay for performance.”

RESISTANCE IN THE AIR

Though in smaller numbers than in Wisconsin, Ohioans have turned out to oppose the Republican attack on unions. Every major city has seen activity, whether pickets, marches, or town hall meetings. Almost 10,000 converged on Columbus March 1.

College students have pulled together a statewide activist network, Defend Education Ohio, driven both by the anti-worker bill and by deep budget cuts that will boost tuition. Marc Auerbach, an Ohio State graduate student, says, “Things are popping up all over the state where people are looking to express their opposition. It’s kind of in the air.”

Public university faculty don’t fare well in SB 5. It reclassifies them as managers and removes their collective bargaining rights.

Sherry Linkon, who teaches American and labor studies at Youngstown State University, said faculty are talking about refusing duties that allegedly make them managerial, such as sitting on hiring committees or helping to fashion department curricular decisions.

The attack on union rights is but one plank of Kasich’s program. The other, mirroring national trends, is cutting government services that support working people and buttress the economy. On March 15, the governor unveiled a two-year budget that hits city and county governments particularly hard, with cuts growing to 50 percent. Schools will lose 11.5 percent in 2012 and 5 percent in 2013, after factoring in lost federal stimulus money.

Privatization will further drain public schools: Kasich wants to double vouchers for private schools to 28,000, while removing the state cap on charter schools. He would sell off five prisons and one turnpike. The budget hits higher education with a 10.5 percent cut in 2012. Colleges would be exempt from paying the prevailing wage on construction projects.

All public employees will take an effective 2 percent pay cut by increasing their required pension contributions.

The governor argues that these cuts are the only way to address Ohio’s deficit, and he refuses to consider any revenue raisers since “we can’t tax our way to prosperity.”

Zach Schiller, research director for Policy Matters Ohio, says much of the state’s deficit is “self-inflicted”—the result of a 2005 tax overhaul that costs Ohio $2 billion a year. The state tax on corporate profits was eliminated, while individual income taxes were slashed to heavily benefit upper-income Ohioans.

The state has lost 400,000 jobs in the last four years, but the governor is moving to further decimate services and is unwilling to revisit the 2005 tax changes that are starving the public coffers.

SB 5 is not popular. Voters in a March 15 poll disapproved of the law, with 54 percent against and only 31 percent in favor. Kasich's approval rating plummeted to 35 percent.

Ohio activists are talking about a ballot option to turn the bill back. If SB 5 opponents can gather 231,000 signatures by June, the measure will be suspended and put before voters as a referendum in November.

Carolyn Park, a paraprofessional in the Cincinnati Public Schools and an AFSCME steward, says the legislative fight has her union pumped up like never before. Park attended a “train the trainer” session in Columbus, and then led a session for members back home to prepare them to canvass and phonebank union households about the referendum.

Labor leaders are just beginning to have conversations about how to raise the state’s revenues, said Harriet Applegate, head of the Cleveland-based North Shore Labor Council. Ideas include clawing back some of the wealth transferred to Ohio’s corporate community and taxing the rich by voter referendum.

But Applegate warns that progressive measures “usually get trounced” by business interests, which spend heavily.

Labor and community activists are thinking beyond the ballot box, too. The same day Kasich announced his budget, a new labor-community coalition called Stand Up for Ohio held protests in 13 suburban and rural locales across the state. Besides the AFL-CIO and the Service Employees, the coalition includes the Ohio Organizing Collaborative, the NAACP, Jobs with Justice, and Defend Education Ohio.

The actions tied statewide union and budget issues to local concerns. In Salem, a rural town in northeastern Ohio hard hit by deindustrialization, community groups have been organizing around access to healthy food. People in much of rural Ohio lack a close-by store that carries healthy groceries, as well as affordable transportation that can get them there, explains Kirk Noden of the Mahoning Valley Organizing Collaborative in Youngstown.

Salem’s March 15 action brought together community and faith activists to protest SB 5 but also to engage residents in wider discussions and ask them to sign cards pledging to take future actions.

“Stand Up” is planning a statewide mobilization in Columbus on May 5.

A version of this article appeared in Labor Notes #385, April 2011. Don't miss an issue, subscribe today.
Related
How We Turned Bargaining Around at Law360 »
Pandemic Discrimination Against Asian Americans Has Long Roots »
Draw the Line in Permanent Marker: Three Organizing Principles »
Virginia Public Sector Workers Are Organizing to Make Their New Bargaining Rights a Reality »
Will the Stimulus Stop States From Slashing More Jobs? »

I wonder why some of the populist/progressive campaigning styles aren't being used to counter the extreme corporate platform. The populists/progressives had a list of reforms they wanted enacted such as direct elections of senators and an eight hour work day.

It was a rallying call and a way to determine if candidates were on their side. I’d love to see a platform calling for the following:

1. Return to the tax code of 1978.
2. Expand the VA health care system to the entire citizenry. (It’s in place, extremely good, and you don’t have to reinvent the wheel or regulate HMOs.)
3. Have Right to Work work legislation whereby all people are guaranteed a job that allows for paid vacations and a decent standard of living. (Roosevelt wanted this toward the end of his presidency.)
4. Publicly financed elections. (this may be the most important future campaign)
5. A true government bank that would make home loans and small business loans 1% over the rate of inflation.
6. Abrogate all treaties that allow jobs to go overseas and to tax the shit out of all corporations who sell here but employ elsewhere.

I’m sure I’ve missed a few, but I think the point was made.

I know a number of people will think such a platform is too progressive. However, how many people would have predicted twenty years ago that there'd be gay marriage in Mass and number of other states, that DADT would be repealed where gays could openly serve, or having an African American President. Times change. If we don't use new strategies they'll change in favor of corporate feudalism.

Don't forget, there were also 1,000-2,000 people in Strongsville and a few hundred in protests across the state in rural areas.