What If Executives Feared Prison Time For Health and Safety Crimes? 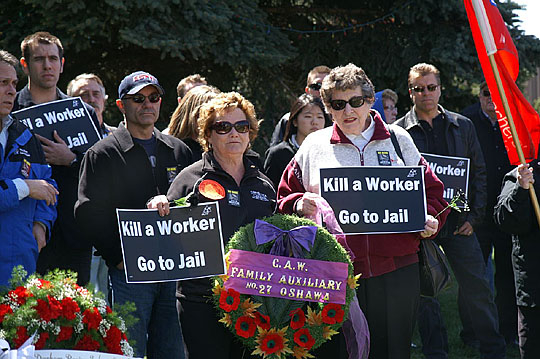 A Day of Mourning in Oshawa, Ontario, for workers killed on the job. Canadian executives can face life in prison for egregious safety problems that lead to a worker’s death. Photo: CAW Local 222.

In the U.S., owners and managers of companies like BP, responsible for 11 deaths and 17 injuries in last year’s Gulf oil rig explosion, never face jail time for the workers they kill.

That’s not the case everywhere: Steelworkers in Canada are pressing a prosecution of managers after an untrained worker died on the job. Canadian law allows for a sentence of up to life in prison.

The U.S. Occupational Safety and Health Act provides only for misdemeanor penalties—six months maximum behind bars—but even such minimal criminal penalties are almost never pursued.

The Mine Safety and Health Act includes harsher penalties, up to five years in prison, but enforcement is no better. Massey Energy’s Don Blankenship retired rich and free in January after two decades of evading mine safety citations, culminating in the deaths of 29 miners at the Upper Big Branch mine in West Virginia last April.

Penalties for willful safety violations that result in the death of a worker are “weaker than the one-year maximum penalty…for maliciously harassing a wild horse or burro on public lands,” said AFL-CIO General Counsel Lynn Rhinehart in Congressional testimony.

Why are punishments so hard to exact? Partly because a budget-starved OSHA is “hopelessly overmatched,” and partly because executives can pay fines and escape prosecution, says Tom O’Connor, executive director of the National Council for Occupational Safety and Health, a coalition of unions and health and technical professionals.

But across the border in Canada, the law is more robust, allowing prison terms for senior management, corporate directors, and company owners who fail to follow safety law and cause a worker’s death.

Canadian unionists won the law, called the Westray Amendment after an explosion at a Nova Scotia coal mine, in 2004. The fight was fueled by outrage that Westray corporate officials went unpunished despite egregious actions that caused the deaths of 26 miners.

Passage of the law initially caused a stir in corporate headquarters, said Ron Corbeil of the Steelworkers in Burnaby, British Columbia. Lawyers booked a full schedule of seminars on the new law, he said. “I’m sure in corporate board rooms they said, ‘make sure everything’s in place, I don’t want to be going to jail.’”

But prosecutors have only invoked the law four times, resulting in one guilty plea, and no one has gone to jail. “As time went on people forgot about it, when they didn’t see anybody being charged,” Corbeil said.

So when prosecutors in British Columbia declined to pursue charges against lumber giant Weyerhaeuser, the Steelworkers union stepped in.

They’re pursuing a case involving the 2004 death of Lyle Hewer, a 55-year-old worker who was ordered inside a wood hopper and was engulfed by falling debris. He had not been trained on the machine, and more experienced workers had refused the task because it was too dangerous.

Police called to the scene recommended that criminal charges be brought against Weyerhaeuser, but prosecutors declined to press the issue.

That’s when the Steelworkers brought a rare private prosecution to hold Weyerhaeuser higher-ups accountable. After long delays, a judge has finally heard several days of testimony. The last hearing is expected February 8 and a decision on criminal penalties is expected soon after that.

The case is reminding other corporate executives of the law, and that alone is a deterrent, said Corbeil.

In labor relations meetings employers often propose ridiculous penalties against workers charged with minor infractions. On occasion they want to fire the workers! In a number of such instances union representatives are forced into [unnecessary] arbitration proceedings in order to fend off those preposterous propositions.

The next time a worker is subjected to unsafe working conditions the employer should be charged with attempted murder.