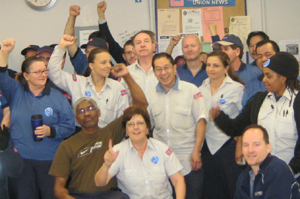 After a one-day strike in Winnipeg over unsafe conditions brought on by mechanization, local postal unions around Canada held a day of action to signal to Canada Post not to underestimate union solidarity. Photo: CUPW.

The Canadian Union of Postal Workers is fighting to stop postal cutbacks in spite of hard times, less mail, and their boss’s love affair with machines. As a January 31 contract deadline for urban postal workers approaches, CUPW is reaching out to the public with ideas for expanding services instead of shrinking them.

The struggle took on new urgency this year as Canada Post continued its roll-out of an ambitious $2 billion mechanization. The program comes on top of post office closures, removal of street letter boxes, reduction of rural mailbox delivery, and other service cuts.

CUPW is proud of being one of the more militant unions in North America. In 1974, postal workers achieved equal pay for the largely female postal code machine operators through a creative boycott campaign and a national strike. In 1981, CUPW became the first federal union to win paid maternity leave, after a 42-day strike.

CUPW also fought successfully for a moratorium on closures of rural and small town outlets, brought thousands of contract rural carriers into its ranks, and has been fighting the privatization of Canada Post.

Postal workers face new work methods tailored for an increasingly mechanized environment, rammed through with little regard for impacts on workers or service. When new facilities opened in Winnipeg, Manitoba, the result was a disaster, leading to undelivered mail, forced overtime, and finally a wildcat strike by letter carriers pushed to their limits by management’s insistence that they work like machines.

The one-day strike November 22 began when one letter carrier refused to use the new methods, which have led to slips and falls. When a supervisor suspended him, 40 workers quickly convened in the parking lot, invoked their contractual right to refuse unsafe work, and went home. When the second shift arrived, they went home, too.

In response to cutbacks and now as part of our contract campaign, the national union has been staging country-wide “days of action” since October 2009, where regions and locals hold events ranging from lunchroom talks to parking lot rallies. A day of action on November 25 saw postal workers from every region proclaim “All Eyes on Winnipeg”—a signal to Canada Post not to underestimate union solidarity.

The Winnipeg local started a “Porch Lights for Posties” campaign that has now been taken up in Edmonton as well, 800 miles east. Carriers deliver light bulbs and flyers to residents, explain why the route restructuring is causing later deliveries, and ask them to “keep your porch light on and help keep your letter carrier safer.”

CUPW is also battling Canada Post’s attempts to shed jobs and shift to a cheaper, less stable workforce. Management is pushing for a two-tier system in wages, benefits, pensions, and job security, betting that members on the verge of retirement won’t mind signing off on rollbacks for newer hires.

A groundswell of opposition is rising, with both local and national initiatives to show that postal workers want equality for all members and a Canada Post that shares the benefits of modernization with workers and the public.

CUPW members have been active on their work floors, distributing information, setting up blogs and websites, writing members of parliament, and campaigning with the public. Locals are encouraged to put ads in bus stops and on radio stations.

The posties enjoy a strong current of public support. Most voters, even conservatives, who often live in rural communities, are staunchly opposed to Canada Post’s service cuts. People remain attached to their post offices. And a population that is rapidly aging understands the value of doorstep delivery, a post office nearby, and some human contact in an impersonal world.

DO MORE FOR CUSTOMERS

CUPW is campaigning for Canada Post to offer more services rather than fewer. The union is suggesting the revival of banking services at post offices, which existed before 1968 and are especially needed in rural areas. It’s advocating more doorstep delivery—residents in homes built after 1975 must now travel to “community mailboxes” to pick up their mail.

The union wants longer hours for post office customers and a place for residents to get licenses and permits, where there is no government bureau. Leaflets from letter carriers stress, “We want your post office to do more for you.”

Rather than whining about declining mail volume, management should look at opportunities to create better jobs that would make Canada Post more profitable. It’s a powerful alternative to cutbacks. If CUPW members keep up their struggle, they may just make history again.

George Floresco is the third national vice president of CUPW. See CUPW’s document The Future of Canada Post, with plans for expanded services.