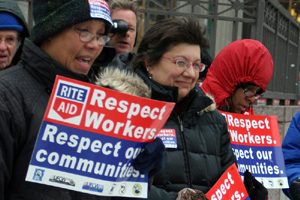 The drug store chain Rite Aid is in financial straits and has escalated its assaults on unionized employees. In response, workers from California to Cleveland (shown here) protested at 40 stores on December 15. Photo: Debbie Kline/Cleveland JWJ.

The drugstore chain Rite Aid is in financial straits and has escalated its assaults on unionized employees. In response, workers from California to New York raised the volume of their protest, with at least 40 actions in front of stores December 15. The unions that represent Rite Aid workers are working together more closely than they ever have, organizers say.

Rite Aid warehouse workers in Lancaster, California, fought a fierce two-year battle to gain union representation in 2008. After another year and a half, they’re still bargaining a first contract, and Rite Aid wants to increase their health insurance costs nearly $45 a month, despite only a 1.5 percent increase in health costs to the company.

Four hundred union members will be laid off January 1 when Rite Aid moves their work from the Rome, New York, distribution center to a non-union facility near Syracuse. “I am sick of Rite Aid saying it is our fault this place is closing,” said Tim Hogan, president of Teamsters Local 182.

The company is hardly alone in demanding big increases in health insurance costs to employees. The Economic Policy Institute reports that family health insurance premiums nationwide more than doubled between 1999 and 2009, racing way ahead of both inflation and growth in workers’ earnings. Premiums rose by 131 percent over the past 10 years, while hourly earnings for non-supervisory workers increased by 38 percent.

Everyone agrees Rite Aid is in financial trouble, due to what the AFL-CIO’s Rand Wilson called “a string of disastrous management decisions that left the company under water.” The Pennsylvania-based company went deep into debt when it bought competing Eckerds and Brooks chains in 2006. It now owns about 4,800 stores.

It’s trying to get out of its financial hole by extracting more from workers, about 30 percent of whom are unionized. The two biggest U.S. drugstore chains, Walgreens and CVS, are non-union.

Workers point out that management seems to be sucking all it can from the company. CEO John Standely just got a raise, to $4.5 million.

The West Coast Longshore Workers (ILWU), Food and Commercial Workers, AFL-CIO, Jobs with Justice, and United Students Against Sweatshops turned out for the December 15 protests, which hit stores in 11 states.

Wilson had some advice for the chain: “Management should get on the ball and stop wasting time and resources, spending money on lawyers to spend two years bargaining contracts, and pissing off their employees.”

Related
Insatiable Shipping Companies Set the Table for the Suez Canal Ship Debacle »
The Grocery Companies Denied Us Hazard Pay—So We Went Over Their Heads »
After Seven-Year Battle, Massachusetts Comcast Techs Win First Contract »
Will Urgent Care Doctors Be Forced to Strike in a Pandemic for the Right to Go Home? »
Understaffed and Unsafe, Bay Area Hospital Workers Strike »