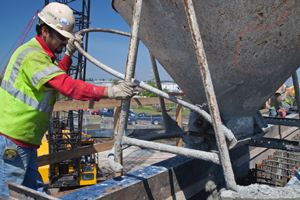 Project Labor Agreements are negotiated between the employer and unions to set wages and work rules on many large, publicly funded jobs. In return, unions promise not to strike or engage in other job actions for the duration of the project. Photo: Jim West

Idled by the housing bust, non-union contractors are attacking agreements that building trades unions have used to defend their work for the last two decades.

Residential and light industrial construction, dominated by non-union firms, is still flat on its back. Construction employment is at a 14-year low, the Department of Labor reported in October. But some publicly funded work is still going ahead, thanks to federal stimulus funds and to state and local spending.

Associated Builders and Contractors, an employer group, is crowing about its latest victory—a November 2 ballot measure that passed by 75.8 percent in San Diego County, California. ABC is vowing a “50-state strategy” to ban Project Labor Agreements.

The ballot strategy may be dangerous for construction union job standards because PLAs, unlike prevailing wage laws, are confusing and opaque to the general public. Prevailing wage laws can be defended by saying that public dollars shouldn’t encourage low-wage work. PLAs can sound more like a backroom deal.

PLAs are negotiated between the employer and unions to set wages and work rules before a large project is bid. In return, unions promise not to strike or engage in other job actions for the duration of the project.

Non-union contractors may bid on the project, but they must pay the wages and benefits outlined in the agreement.

The proposition on the San Diego County ballot claimed it would “ensure fair and open competition for county construction contracts.”

PLAs are agreements struck between funders of a building project—public or private—and the building trades unions that are expected to have members working at the site. They’re used for large, complicated projects. Federal guidelines say they should be considered for projects costing more than $25 million.

PLAs started out as a compromise by building trades unions to secure work. Court decisions in the late 1970s and 1980s allowed construction employers to get out of “pre-hire” agreements to hire union workers, so the unions created these project by project agreements. In 1993, the U.S. Supreme Court upheld their legality on public projects.

Generally, a Project Labor Agreement will set wages at or slightly below union scale, but far above what non-union companies will pay. In return for promising not to engage in any job actions during the project, unions get a guarantee of particular pay and work rules. If a subcontractor is non-union, his workers will work union during that project, getting the same wages and benefits and paying union dues.

PLAs decrease inter-trade fights over which union gets what part of the work, because jurisdiction is agreed to in advance.

But PLAs are double-edged swords. Costs may also be comparable to non-PLA jobs because workers are bound not to take “costly” job actions, the kind that get the goods.

It sounds like some kind of civil rights measure, and that’s how ABC portrayed it in the media. San Diego ABC president Scott Crosby argued that the requirement that employers pay a worker union scale is discrimination against that worker, who is “forced to join a union” for the duration of the job. It’s also discriminatory against the non-union contractor, he said, who could win the bid if he didn’t have to provide higher pay and benefits.

The ballot measure prevents the county from requiring contractors to enter into Project Labor Agreements for construction projects it controls.

This is the third win for the employers group, which won ballot measures in two San Diego County municipalities before convincing the Board of Supervisors to put the measure on a county-wide ballot.

The unions struggled to convince voters of their case. After sinking a half-million dollars trying to defeat the measure in Chula Vista in June, the San Diego Labor Council decided not to spend money to fight the county-wide ban, although it raised a lot of media attention and spoke loudly against its passage.

“When workers are protected… when we give health care to workers, all of us are made better,” Council Secretary-Treasurer Lorena Gonzalez said after the vote. “The contractors are going to continue to fight that because it means less profit for them, and that’s all they care about.”

Although their goal is to get access to public money, anti-union contractors are using the same “taxpayer revolt” arguments against union construction workers that have been used against teachers and other public employees.

The contractors claim they are watching out for taxpayer dollars and that PLAs drive up costs. One study of schools in Massachusetts claimed that projects governed by PLAs cost 14 to 17 percent more. But projects governed by PLAs are likely to be more complicated, and therefore more expensive. A high school science lab costs more to build per square foot than an elementary school classroom, no matter who is building it.

Additional studies which took these factors into account found that PLAs didn’t drive up costs. Experts say the work is more efficient and jurisdictional fights don’t hold up construction.

Still, the claim appears plausible to many since wages are certainly higher than they would be if bottom-feeding non-union contractors got the work.

ABC has also attacked PLAs by creating stories to feed to the press. The AFL-CIO Building and Construction Trades Department alerted local leaders to one such case November 10.

According to the AFL-CIO, the contractors group paid for an audit that found alleged violations of labor law by union contractors involved in a PLA for the Los Angeles school district. Then the group promoted the audit as an impartial revelation of wrongdoing. The department warned union officers to watch out for similar tactics in their areas.

Anti-PLA efforts are a pain in the side for construction trade unions. But preserving PLAs will not fix the main issues, said David Minasian, a union carpenter in Worcester, Massachusetts.

His local feels most intensely the incredible rate of construction worker unemployment, 17.3 percent nationwide and 25 percent in his local. “We need reauthorization of unemployment benefits and we need a big round of infrastructure spending,” he said.

The Laborers union echoes that sentiment, pointing to the crying need for public construction dollars and pushing for a surface transportation bill that’s been stalled in Congress.

To gin up support, Laborers billboards in Pennsylvania warn drivers about the condition of the bridge they’re about to cross, with alarming pictures of crumbling concrete. According to the union, 5,646 bridges in Pennsylvania are “structurally deficient.”

Under the new Congress, the bill faces an uphill battle.

Non-union construction contractors are joining the taxpayer revolt at their own peril. If the anti-tax furor gains ground and publicly funded projects dry up, there won’t be much work for anyone anytime soon.