What Will Labor Learn From the Election Disaster? 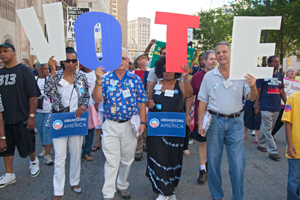 There are no short cuts to shifting political power or shaping common sense. But this election gives labor activists a warning to pull the plug on strategies that helped get us into this mess. Photo: Jim West.

Who would have thought that the party of Big Business could do so well just two years after the banks crashed the economy? Republicans are treating the mid-term election like a homecoming party, but polls show it was more like a kick in the pants for the guys in charge.

Nearly two-thirds of voters identified the economy as the most important issue facing the country, but most of those who showed up at the polls pulled the lever for the champions of unfettered free markets. And voters who blame Wall Street for our economic problems tilted even more Republican.

That wasn’t irrational. The Democrats are closely tied to the banks, too—look at President Obama’s advisers. A majority of people who voted this time say they have unfavorable opinions of both parties.

“People are angry for obvious reasons,” said Jeff Crosby, president of the North Shore Labor Council in Lynn, Massachusetts. “Your 30-year-old kid is sleeping on your couch. The company wants to eliminate your defined-benefit plan, and the banks got away with everything. Question is, who are you going to be mad at?”

Democrats were the obvious target, according to Jim Cavanaugh, head of the South Central Federation of Labor in Madison, Wisconsin: “This was a kneejerk vote against the people that have been running things the last couple years.”

People want someone to do something about the banks foreclosing on them and the companies tossing them out of work. And the Democrats, after doing so little to solve the crisis once it was created, paid the price.

“We hoped 2008 would be definitive,” said Rich Templin, political director for the Florida AFL-CIO. “But nothing emerged that people can touch, feel, or taste—that actually helped them.”

But whatever Obama’s missteps since taking office, the labor movement and its allies have plenty to chew on, too.

Who was in the streets saying there was a massive crisis that needed to be addressed now? Who was pushing for sweeping change? Who was swearing they would never compromise on their principles?
“The Tea Party took a page from us,” said one rank-and-file California telephone worker. “They were getting militant at the town halls—getting out in the streets—while we kicked back and watched.”

If labor doesn’t get its playbook back from the Tea Partiers and get busy raising some hell, the 2012 elections will be just as ugly. Both the president and Democrats in Congress will move closer to this fall’s Republican victors unless they hear loud and clear otherwise.

In a sea of bad news, any bright spots for the Democrats November 2 were usually wrapped in the union label.

Union voters made the difference in Senate races in Nevada and West Virginia, and tight contests like the governor’s races in Illinois and Connecticut.

Many Democratic winners were no labor heroes, of course, despite the debts they owed to union campaigners. In Oregon and New York, new Democratic governors pledged to roll back state workers’ pensions or pay.

Labor has to ask hard questions about how it does politics. Unions say they collectively poured more than $200 million into the 2010 election, counting staff time. According to data from Open Secrets, the campaign-finance tracking group, unions were still outspent at least 11 to 1 in donations and outside spending alone by corporate interests.

Templin reported that millions of dollars of secret soft money flooded into Florida. “We ignore that at our peril,” he said.

Most union leaders still approach rank-and-file members the way politicians approach the voters, as people who need a sales pitch. Labor’s reliance on mailers and robo-calls makes it hard to distinguish a union voice in the blizzard of election propaganda.

PLAY TO OUR STRENGTHS

We’re strongest when we do politics the way we do organizing, member to member. Both academic and in-house research show that an election appeal from a trusted co-worker is roughly 9 times more effective than a mailing from the union, according to AFL-CIO data.

But we ignore what we know. According to the AFL-CIO’s election-night poll, only 15 percent of union voters were contacted by a steward or co-worker at work this year.

By contrast, 72 percent received a flyer or pamphlet in the mail. It’s hard not to confuse the union with a telemarketer after the fifth voicemail from some statewide labor leader you’ve never heard of.

Beyond our own ranks, labor needs to grab the bully pulpit and turn on the biggest megaphone we have—speaking to the public directly as union members.

In 2005, for example, nurses bird-dogged Governor Arnold Schwarzenegger across California for months, and the governator’s anti-union ballot measures went down in flames. The California Nurses Association gave billionaire candidate Whitman the same treatment this year.

When rank-and-file members are the face of labor’s election efforts, it’s harder for the other side to paint workers as a special interest. The more we do politics the way the consultants tell us, the more we look like political junk food.

How did we get from a situation, in 2008, where most of the country blamed Wall Street and out-of-control corporate greed for our nation’s economic tailspin to a situation, in 2010, where public employees like teachers and librarians are the enemy? That shift took only two years, and it happened because conservatives took the fight over ideas seriously.

It didn’t hurt that they had a multi-billion-dollar, 24-hour spin machine to push their point of view. But Jeff Crosby says labor shouldn’t punt on the big ideas just because we don’t have our own version of FOX News.

“Our movement is so non-ideological. We have to have a discussion,” Crosby says. “What’s the role of government? There’s a huge chunk of people who think the market can fix everything and immigrants are the problem. We have to tackle that.”

One place to start is by taking a chunk of the money unions are pouring into politics and put it into member education. We need more union members in more union halls and community centers around the country talking about the big questions, and what we should do about them.

Labor has learned the hard way over the past two years that we can’t take our cues from Washington politicians. In the same vein, local leaders don’t need to wait for headquarters to produce a roadmap, either.

“The reality is we need to build a new majority that goes way beyond our numbers,” Crosby said. In his city, unions and community groups with a membership base are coming together post-election to talk about a long-term alliance. Its goal will be both political action and political education, creating “a new common sense around everything from politics to economic development.”

There are no short cuts—in Lynn or any other community—to shifting political power or shaping common sense. But this election gives labor activists a warning to pull the plug on strategies that helped get us into this mess and get to work building something different.

Good question, but a better question would be, "WHEN Will Labor Learn?" When will we learn that the Democratic Party does not represent us, and likely never will represent us? They will toss us a bone about once a generation (see FMLA), all the while letting Big Business starve us out (see Replacement Workers Legislation, NAFTA, Employee Free Choice Act, etc).

It seems that you're trying to blame Labor for the electoral losses and ignoring the main source responsible for them - President Barack Obama. He delivered a lot of Progressive rhetoric during his campaign, but his administration has certainly not been Progressive. This has alienated much of his base, including many in Labor. Furthermore, if the President has lost the propaganda war to the likes of Glen Beck, he has lost it by default. He has chosen to remain oblivious to the fact that he has the greatest bully pulpit in the world. Or, more likely, he chooses not to use it because his message isn't really all that different from the Republicans. As for myself, I had cautious hope for this administration, but no more. Obama is another in a line of Democratic presidents who has faked left to get elected, then cut back to the right once in office.

On the other hand, what alternative to the Democrats do we have? You know, the lesser of two evils...

Unfortunately, I have to agree with Noam Chomsky's assessment that we don't really have a two-party system in America. What we have is one party, a Business Party, with two right wings.

Jeff, I think you missed the sea change that broke in the last election. It wasn't about anger or frustration or confusion. It was about electing candidates who promised to run our national house like I run my own.

At my house, I don't hire union landscapers or illegal immigrants -- I do the work myself. I pay attention to the cost of groceries and have an antenna on my roof. I save a little bit every week and have never missed a credit card or mortgage payment. I don't have tenure and don't get a check from the government. I drive a six year old focus and a ten year old explorer. When I get home from work, I help my kids with their homework and, on the weekends, I watch them play ball.

I haven't belonged to a union for decades, but I am not anti-labor. I am not pro-business either. I'm part of the 80% of americans who do not belong to unions and are not rich. I vited for Ross Perot and Ronald Reagan twice.

As long as I have been voting, I have had no voice. I've had to choose a pro-union democrat or a pro-business republican. Either way, once the voting was done, the winner had no use for me. Democrats gave me poor schools while republicans shopped my job overseas.

In the last election, candidates ran who claimed not to be beholden to unions or business. I voted for them. If they follow through on their promises, I'll vote for them again. A lot of people feel just like me.

Learn this from the election, Jeff -- there isn't enough money to buy an election in this country. Use union money and influence to win the support of those of us who are not for sale. Make the schools better, bring more kids into trades, and be part of the community. If you can do that, unions will be fine.