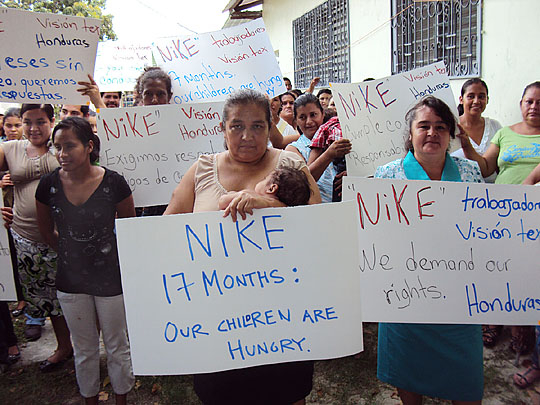 In recent months apparel workers, the WRC, and allies in United Students Against Sweatshops have yanked a few industry giants to toe the line.

Are the WRC and USAS finally tasting the fruit of their international campaigns, until now marked by frustrating setbacks?

USAS, which supports unions on campuses and workers throughout the collegiate apparel industry, has won gains since 1997 in local organizing drives and living wage agreements on campus. It’s raised the profile of corporate campaigns, including Killer Coke and the Coalition of Immokalee Workers’ “fair food” boycotts.

But victories for the workers overseas that USAS has aided have proved elusive.

The past year, though, has produced three path-breaking wins in Honduras and the Dominican Republic. Corporate shame campaigns against Nike and Russell Athletic, which resulted in key universities ending contracts with the companies, have brought both multinationals to the table with workers. In the Dominican Republic, Knights Apparel has teamed up with the WRC to reopen a factory abandoned by other industry giants.

The college apparel industry is estimated at between $3 billion and $4 billion per year, with virtually all goods produced at poverty wages in non-union shops under grueling conditions.

Apparel companies benefit from complicated subcontracting arrangements and global mobility that allow managers to play factories and regions against one another. The companies’ ability to abandon organized shops, move production, and chart the “race to the bottom” across the world has proven an Achilles’ heel for organizers.

BEAT ‘CUT AND RUN’ IN HONDURAS

Despite death threats and the firings of almost 150 unionists, workers at the Jerzee de Honduras factory won an extraordinary campaign in 2007, creating the country’s first organized garment factory.

Management threatened workers more than 100 times that the union would mean shuttering the factory. When Russell closed the shop in 2008, USAS activists sprang into action to support the 1,200 workers. Students protested at sporting events and at retailers that carried Russell apparel.

After more than 100 universities cut ties with the apparel brand, management was more amenable, agreeing to rehire unionists fired at Jerzee de Honduras in November 2009 and to respect the union there.

Surprisingly, the company extended that attitude to seven other Russell factories in Honduras as well. Affecting Russell’s 10,000 Honduran employees, this is the first nationwide neutrality agreement in Central America, says Rod Palmquist of USAS.

Nike, the perennial foe of the anti-sweatshop movement, fell into line soon after the win over Russell. Nike had been a target since two subcontractors in Honduras closed in January 2009, leaving 1,800 without work. Under Honduran law, these workers were due severance pay.

While neither factory had a recognized union, the CGT union had rank-and-file leaders in each plant ready to act. When Nike denied responsibility, the union cried foul and USAS activists made sure consumers and universities knew why. USAS activists organized the “Just Pay It” campaign, protesting at Nike retailers and pushing their universities to pressure Nike.

Nike hid behind its usual arguments about subcontracting for months. But Nike ultimately decided the fate of each factory. Both went bankrupt because Nike, which controlled most of the production in each, pulled its orders.

The University of Wisconsin-Madison did not buy Nike’s excuses and became the first university ever to cut ties with Nike over workers’ rights.

Cornell threatened to follow suit after students collected more than 1,100 signatures on campus. But Nike’s subcontracting ruse gave Cornell administrators pause. So Cornell USAS mobilized teach-ins, won endorsements from the university community, and brought Honduran workers to campus, part of a national USAS worker tour. The administration pledged it would not renew its Nike contract without serious improvement.

Those two universities were enough. Nike agreed with the union July 26 to set aside $1.54 million to help workers secure medical care and vocational training and to give laid-off workers hiring preference at other factories.

Nova says this “watershed moment” is the first time a brand has taken financial responsibility for subcontracted workers.

Nike’s quick about-face points to the effectiveness of canceling contracts to put some teeth into university codes of conduct. But keeping Nike up to its word will take more work. Nike has characterized the “workers relief fund” a one-time gesture of benevolence, not the legally required severance, to avoid setting a precedent.

RESPONSIBILITY IN THE DR

Many U.S. activists first heard of the Dominican town of Alta Gracia in a recent New York Times piece that detailed the founding of a factory and a brand, both named Alta Gracia, that promote a living wage and respect union rights.

The unionists at Alta Gracia have a history with USAS that goes back to the organization’s founding in 1997, when student activists visited workers there in the BJ&B hat factory.

Those workers fought off firings and unionized in 2003, but Nike pulled out, announcing it would be sourcing from “more competitive” (read: non-union) factories, repeating a trend USAS had seen at other organized shops. Two thousand workers and the town of Alta Gracia were left behind.

Knights Apparel, founded in 2000 and already claiming the largest market share of collegiate apparel a decade later, stepped up. Knights has been the only brand to admit that sweatshops are a serious industry problem. Long in conversation with the WRC, the two decided to stick with BJ&B workers and open a project where management respected workers’ rights from the outset, proving that decent pay and conditions—and unions—are possible in the apparel industry.

Alta Gracia could be an early beneficiary of a pending “Designated Suppliers Program,” endorsed by 45 schools, that will create a list of “good factories” with independent unions that collegiate buyers can support.

Working with other WRC-affiliated schools and campus bookstore chains, Alta Gracia will give students at 400 campuses a living-wage alternative to sweatshop-produced goods this fall.

BEGINNING OF THE END?

Could Alta Gracia herald the end of race-to-the-bottom clothing on college campuses? Alone, one model factory may not lead industry-wide changes.

Although Knights is willing to eat the costs of providing living wages there without passing significant price hikes on to consumers, the company is isolating Alta Gracia as a distinct brand and has made no promises to pay higher wages in its other factories in the Dominican Republic and the Philippines.

The union at Alta Gracia will be free to represent workers instead of fighting to survive. Since managers and workers know that success is tied to their ability to meet labor standards, management has “reversed incentives” compared with other factories, Nova says. Workers welcome their higher pay ($2.83 per hour, almost three times the minimum wage other Dominican factory workers receive), but without significant improvement throughout the industry, Alta Gracia workers will be at risk given the cut-throat competition that characterizes the industry.

While workers in Honduras and the Dominican Republic overcame corporate tactics with USAS and WRC solidarity, their greatest allies in the end may be other garment workers. With the door open for Russell factories across Honduras to unionize, and with Alta Gracia up and running, union garment workers have a lot to learn from one another.

And if the Designated Suppliers Program clears an antitrust review by the Department of Justice, schools may just have a surprising number of unionized garment factories to choose from.

A version of this article appeared in Labor Notes #378, September 2010. Don't miss an issue, subscribe today.
Related
'If the Military Leaders Win, There Will Be No Unions': Myanmar Garment Workers on the Strikes Against the Coup »
Myanmar Union Federations Call for International Support Against Coup »
From Indonesia to Honduras: How Anti-Sweatshop Activists and Unions Made Severance Pay Mandatory »
China's Young Workers Fight Back at Foxconn »
Who Speaks for China’s Workers? »