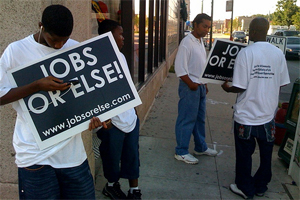 Wal-Mart outmaneuvered union and community forces in Chicago to win city council approval for the discount chain’s second store in the city. Some unions claimed victory, saying a wage agreement was reached, which the company denies. Photo: Ira and Andrea.

Wal-Mart outmaneuvered union and community forces in Chicago to win city council approval July 7 for the discount chain’s second store in the city.

The Chicago Federation of Labor and the Food and Commercial Workers claimed victory, however, saying they’d negotiated a “community benefits agreement” that commits the company to use union members to build the store and to pay an $8.75 an hour starting wage, 50 cents higher than the state minimum.

Wal-Mart denies that a wage promise was struck. The agreement doesn’t specify a rate, simply stating that workers will receive “competitive market salaries” and a “comprehensive benefits package.”

Just to make sure, the company also granted itself a giant loophole. “Any term or agreement in this document is subject and contingent upon business conditions,” the deal concludes.

Even if the agreement comes into effect, its terms are far softer than the demands put forward since January by Good Jobs Chicago, a coalition anchored by the Service Employees, several congregations, and the Grassroots Collaborative, a community group instrumental in living wage fights in the city.

That group had pushed the city council, unsuccessfully, to enact a law this spring that would make employers pay $11 an hour with benefits when they draw on public subsidies. (Wal-Mart is expected to locate in one of the city’s many tax-favored districts.) Similar legislation aimed at “big box” retail stores was vetoed by Mayor Richard M. Daley in 2006, the only measure he’s struck down in his 21 years in office.

Amisha Patel, Grassroots Collaborative’s executive director, said pro-living wage forces were outgunned this time, unlike in 2006, when Daley’s veto launched a wave of political action that elected a bloc of pro-labor city councilors.

Privately, other organizers say the coalition was hampered by insufficient resources, the building trades’ single-minded focus on their own members’ jobs, and the UFCW’s zeal to settle and get something—anything—from Wal-Mart. In addition, the Chicago Federation of Labor wanted to please the trades and to avoid picking a fight with the mayor ahead of a budget season expected to see a shortfall that could grow as large as $1 billion.

Wal-Mart has announced plans to build as many as 22 additional stores in the city, and sees its success in Chicago as cracking the dike of labor-community coalitions that has thus far kept the low-road employer out of union-dense Northern cities like New York and D.C.

Wal-Mart carefully exploited racial divisions in Chicago, as it has for years, nurturing ties with South Side Black politicians and clergy and playing up anger over the historic exclusion of people of color from high-paying union jobs—especially in the trades.

It also purchased “community support.” Bloggers discovered that a “grassroots” pro-Wal-Mart group purporting to speak for a community where a store would be located was in fact created by the company’s PR firm. The company paid homeless Black men to go to pro-Wal-Mart rallies at City Hall, a fact uncovered by a volunteer active in the living-wage fight who struck up a conversation in a soup kitchen line.

The company hired elected officials’ family members as lobbyists, and has channeled hundreds of thousands of dollars to local politicians in recent years. The company also dangled the notion of increased sales-tax revenue for cash-starved city coffers.

Mostly, Patel blames the setback on the negative economic environment. The arguments for requiring giant retail employers to pay a living wage when they soak up public subsidies haven’t changed, but Wal-Mart’s relentless mantra of job creation proved irresistible in a city where unemployment is 10.3 percent.

Of course, researchers continue to show that Wal-Mart actually hurts employment when it moves into new communities. Researchers at the University of Illinois at Chicago and Loyola University released a study in December showing that 300 full-time jobs were lost in the area surrounding the city’s first Wal-Mart in its first three years of operation.

“The standard of living declines when Wal-Mart comes in,” said Ron Baiman of the Center for Tax and Budget Accountability in Chicago, because it lowers real wages but not prices for all the things you can’t buy from Wal-Mart’s shelves, such as housing and health care.

With Wal-Mart winning this round, Chicago activists say they’ll be rethinking strategies to move their good-jobs agenda. The alternative, said C.J. Hawking, executive director of the Arise Chicago worker center, is pretty grim.

“The sucking sound of money from the bottom to the top is quite loud these days,” she said.