Warehousing Gets Lean and Mean 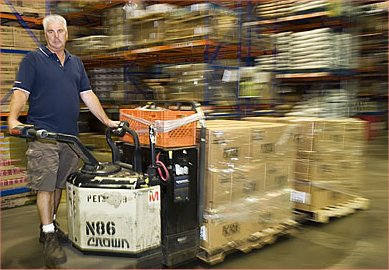 Taking a page from manufacturing, retailers are driving their vast network of warehouses and distribution centers to get “lean.” Deploying a combination of technology and ratcheting production standards, U.S. retailers have already trimmed inventories 20 percent in the past 15 years, according to Census Department data.

For warehouse workers, the result has been a relentless push to work harder, with management’s watchful eye extending further and further into the workplace. New technology has isolated workers from one another, and workers find themselves divided by the stick of production standards or the carrot of incentive pay.

At one level, filling orders has changed little in a generation. Most warehouse workers spend their days assembling shipments for individual retail outlets, snaking through a maze of shelves picking products by hand. Most of the time is spent traveling from place to place.

But technology has been a key ingredient in trimming this travel time, and has also robbed workers of control in today’s “lean warehouse.” Traditionally, workers could plan their own routes to retrieve items, using their knowledge of warehouse layout and their judgment to pull orders together.

Now, “the computer tells you where to go,” says Nicholas Richards, a selector in the Baltimore warehouse of Sysco, the nation’s largest restaurant supplier. “It even tells you how to stack the cases. But it doesn’t tell you what’s coming next.”

Workers are subject to a steady stream of instructions with no way to see two steps ahead. Richards, a member of Teamsters Local 355, typically fills three orders at once—each stacked on separate pallets resting on a long floor jack that he pulls along the warehouse floor by hand. He gets instructions from a computerized device strapped to his forearm, which he also uses to scan the barcodes that shoot out of the label printer strapped to his waist.

The device is part navigation system, part tracking device. “Management doesn’t even have to come to the floor to see what you’re doing,” says Richards. “They’ve got a computer that tells them how long you’re taking in each slot. If you’re idle for too long, your name and ID starts flashing on their screen.”

Companies use the steady stream of data to chop more time off selectors’ routes. When Richards started in 2003, they worked on two pallets at a time, and their standard was to pull 126 cases of food an hour. Today he’s responsible for close to 200.

Technology is not the only way to hammer on workers; old-fashioned time-study works, too. Carlos Rubio, who fills orders in a Rite Aid distribution center in Lancaster, California, says management is supposed to study several people, throw out the lowest and the highest times, and use those in the middle to set the standard.

Rubio and his co-workers have been locked in a four-year battle with Rite Aid after joining the Longshore and Warehouse Union. Although workers have won an election and multiple Labor Board charges, Rite Aid is still fighting the ILWU, and workers continue to face stiff resistance on the job.

Rubio says management’s latest move has been refusing to adjust standards for the different sizes and weights of seasonal items.

ISOLATED AND WORN DOWN

Between the escalating pace of work and the technology, workers in today’s warehouses have little time for human interaction.

“You’re in your own world,” said Bill O’Bayley, a Teamster steward who loads frozen food trucks for a New Jersey grocery supplier. Workers in his warehouse wear radio headsets that direct them from aisle to aisle. “You don’t get that watercooler talk. It’s just gone.”

“You lose all the microbreaks you used to get, like when you turned a bill in at the window and got another one,” said Frank Halstead, a Teamster in a Los Angeles warehouse that supplies Ralph’s grocery stores. “The system requires you to do more physical work. And it never stops. You’re constantly going 24/7, like a machine.”

“It puts people on a personal agenda,” he said. “Every order selector has a clock ticking in their head. If someone’s in their way, they get antsy because they’re losing time.”

The rush to beat the clock also compromises safety. OSHA says motorized pallet jacks should be operated no faster than a person can walk, O’Bayley says, but new jacks go 20 miles an hour.

Richards says the speedup is a Catch-22: “They’re forcing me to work faster and harder. But if I get hurt then it’s my fault.”

Managers are not content just to squeeze union workers harder—they’re also searching for ways to replace them altogether.

Halstead points to a totally automated grocery warehouse in Paramount, California, where machines select cases, assemble orders, and shrink-wrap pallets. According to the company, this new system will eliminate 240 jobs when fully operational. Similar warehouses have been up and running for several years in Colorado and Arizona.

“The union is MIA on technology,” Halstead said of the Teamsters. “We have no strategy, no plan.” Clearly, management isn’t waiting for them.

A version of this article appeared in Labor Notes #374, May 2010. Don't miss an issue, subscribe today.
Related
Teamsters United Takes the Wheel »
Work Saturdays, Huh? How UPS Drivers Resisted by Complying »
Teamster Insurgents Plan for a Win—And What Comes After »
Viewpoint: We Must Prepare to Strike UPS in 2023 »
At a Convention Like No Other, Teamster Challengers Turn a Corner »