Closures and Charters Hailed as Future for Detroit Schools 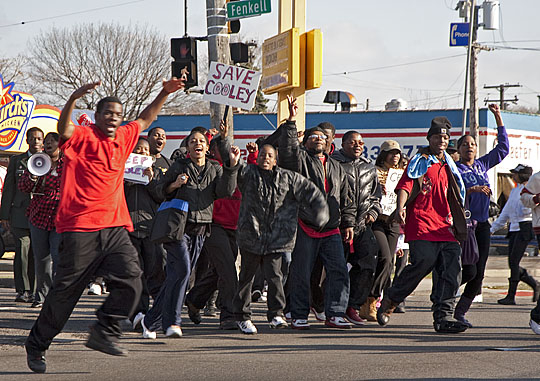 Students protest the planned closure of Cooley High School, one of 44 Detroit schools facing the ax. State-appointed schools manager Robert Bobb is on board with a private plan to usher 70 non-union charter schools into the city by 2020. Photo: Jim West/jimwestphoto.com

Before Detroiters voted last fall on a half-billion-dollar bond measure to renovate and build new schools, the state-appointed financial manager Robert Bobb launched an “I’m In” campaign to keep kids in the public schools, which are hemorrhaging students.

After voters approved the bond, Bobb announced that 44 schools would close. At the same time, a grouping of charter school companies and foundations with close ties to Bobb released their plan to open 70 new charter schools over a decade.

The closing of a quarter of Detroit schools, to be finalized in April, comes after 29 others were shuttered last summer. Bobb is calling for even more consolidation, pointing to the district’s drop from 164,000 students in 2003 to 84,000 this year.

Rank-and-file teacher reformers are trying to build opposition to Bobb, in a teachers union (DFT) facing threats to its very existence.

Bobb is touting a “slimmer, smarter” district, and he’s throwing out some big numbers. Sixteen percent of the city’s 11th graders scored “proficient” on the state’s standardized math test last year. Bobb says 100 percent will pass in 2014. In the same year, he promises, all of the district’s remaining schools will meet federal standards for improvement—though only 31 percent did last year. Bobb claims he will push graduation rates, now at 58 percent, to 98 percent.

How does he plan to pull it off? Details are slim, but Bobb is placing great faith in charter schools to drive competition. Public schools now reach 70 percent of the city’s students, but as the district downsizes, charter school backers seek to flip that ratio.

In addition to calling for 70 new charter schools, the Ownership plan lays the foundation for an “education marketplace” where charter and district schools compete for students, using test scores as the marker of success.

An independent “standards and accountability” commission will grade schools on this basis, recommending closure for some and helping parents become “smarter shoppers.” They’re pushing to put new Mayor Dave Bing in control of the schools to expedite the overhaul and cut out elected school board officials.

These architects of privatization don’t have to convince Bobb and Bing to enact their vision. Bobb spoke at the release of the privatizing plan. Before his election, Bing sat on the board of University Preparatory Academy, a series of schools run by New Urban Learning. The charter operator fought off a teacher organizing drive last spring.

Now it’s building a new charter high school across from the American Federation of Teachers office—and naming it after the mayor.

Add to all this a new state law raising the cap on charter schools in the city, and the teachers union finds itself in a tough spot. The charter plan touts involvement from labor, but AFT-Michigan has not taken a position yet.

While the Detroit School Board contests Bobb’s powers to enact the overhaul, students have walked out to protest the closing plans, and teachers are organizing in the face of inevitable charges that they’re just protecting the status quo.

A months-long battle inside the Detroit Federation of Teachers escalated last winter when angry teachers tried to recall President Keith Johnson after he eked through ratification of a contract that included 10 percent wage cuts and stipulations for private management companies to contract with pilot schools.

Teachers in the Defend Public Education/Save Our Schools caucus have been a loud voice of opposition. Johnson fired back, charging two teacher leaders, Steve Conn and Heather Miller, with inciting a riot at a union meeting. After a late-night trial at the union hall, the two factions decided to table, but not drop, their respective charges.

The opposition caucus recently swept the DFT’s election for delegates to June’s national convention in Seattle. Teachers are hoping to build a broader challenge to AFT President Randi Weingarten. They say the AFT is not fighting President Obama’s education overhaul that is devastating public schools and local unions. Obama’s push to make teachers “accountable” quickly turned into mass firings, as witnessed at Central Falls High School in Rhode Island.

Conn and company went to D.C. for a small April 10 march on the Department of Education, where they were joined by teacher reformers from all over the country, but not the AFT officialdom. “Weingarten’s response to the Obama plan is just poison,” says Conn.

Back home, teachers and community groups are trying to shape the Bobb plan, acknowledging under-enrollment and poor facilities, but arguing they shouldn’t be used as excuses for a firesale that consumes innovative public schools.

Detroiters were especially puzzled when Bobb announced that the Catherine Ferguson Academy would be moved. The school for mothers and pregnant teens features an urban farm—which would seem to root it at its current location.

Bobb’s master plan for closures targets schools serving lower-income students. He vows to build and expand “schools of choice” in the city—where any student can attend, but only if they get accepted.

Students at neighborhood K-8 schools thus face massive displacement in a city already suffering from a 27 percent dropout rate. Eighty-two percent of the students at Owen Elementary School, for example, receive free or reduced lunch. Only 44 percent of the students at nearby Burton—a “school of choice”—get help with lunch money. Bobb seeks to close Owen and create a new, expanded campus for Burton. Neighborhood kids will have to apply to Burton, find another school, or get lost in the shuffle.

The plan would result in a district-wide staff shakeup, too, an enticing prospect for alternative-certification “new teacher programs” eyeing the city. Last year Bobb put nearly every high school in the city under contract with private management groups; there’s no indication he’ll stop there.

Detroit teachers and students pleaded for their schools at April “town hall” meetings. Each school was given 20 minutes to make its case. Some brought out the marching band; others did a cheer; some cried as Bobb looked on, scribbling notes.

The high-stakes talent show at Northwestern High School got heated as students, alumni, and teachers of the legendary school—slated for closure—indicated they would not leave quietly. A crowd charmer, the schools chief indicated gently that their time was up. Ron Scott, class of ’65, stepped to the mic. “Lets be for real, Mr. Bobb: don’t tell my classmates we have a limited time in our house,” he said, as students cheered. “You have a limited time in our house.”

Detroit’s schools remake focuses on raising performance but ignores—or exacerbates—the poverty and segregation that underlie the education crisis. Persistent social and economic collapse is the rationale for more private interventions. And as the charter movement siphons more public dollars, district schools are even less capable of renewal. Set up to fail, they’re primed for takeover.

Secretary of Education Arne Duncan said Hurricane Katrina was “the best thing that happened” to New Orleans schools, which were largely handed over to private operators. It’s clear that a school district with a decimated union and only a handful of public schools is the Obama model. The administration is looking to the economic storm, hitting Detroit harder than anywhere, to drive the model home.

Detroit voters will decide on a second $500 million bond measure later this year. If Bobb has his way, much of that will end up in private hands.

A version of this article appeared in Labor Notes #374, May 2010. Don't miss an issue, subscribe today.
Related
Troublemakers Schooled in Detroit and Philly »
Teachers Strike against a ‘Heartless’ School Board in Biden’s Hometown »
Detroit Postal Workers Push to Dump DeJoy and His Ten-Year Plan »
Why Did California's Tax the Rich Measure Lose? »
School and Campus Workers Say: Not Until It's Safe »