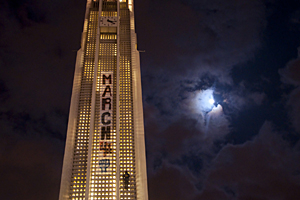 To defend public education, organizers plan to combine the efforts of all public schools across the state to resist business as usual, fight layoffs, fee hikes, and program cuts, and call for expanded federal funding, open admissions, and democratic schools. Photo: OccupyCa.

For workers and students on University of California campuses last fall, it was clear to see that a movement was being born. Five months later it is deepening into a statewide resistance that aims to change the course of education politics in California and beyond.

The stimulus for last fall’s activity was the budget crisis. Or as the increasingly popular slogan puts it, a “crisis of priorities,” pointing to the poor decisions made by politicians and administrators about how to manage public funds and run public institutions.

The response was walkouts, union strikes, building occupations. The actions drew large crowds. Two thousand faced off against police outside Berkeley’s Wheeler Hall during the student occupation in November. Actions flared up across the state, touching both the UC campuses and the Cal State system.

Sights are set this semester on a March 4 Strike and Day of Action, called for by a “Mobilizing Conference” of more than 800 workers, students, and teachers last October. To defend public education, organizers plan to combine the efforts of all public schools across the state.

The goal is to resist business as usual, which has meant layoffs, fee hikes, and program cuts—and to call for expanded federal funding, open admissions, and an education system with students, faculty, staff, and working class communities at the fore.

THE LIFE OF THE MOVEMENT

Big actions are crucial, but so is the less visible work going on behind the scenes. This has included the formation of new organizations such as the Student-Worker Action Team to bridge student organizations and campus unions, reach out to students and K-12 teachers unions, and create collective discussion of demands, goals, and tactics.

As the movement grows, so does the diversity of the participants—in their backgrounds, how they relate to the “budget crisis,” what they hope to accomplish, and how they want to do it. The real life of the movement has been the hashing out of these differences, in long meetings and via email.

Student groups went into the winter break reeling and reflecting. Occupations and standoffs with the police left many with physical scars, stirred emotions, and court dates. But the end of the semester also created space for reflection.

Students are quite aware of their connection to an international student movement and struggles and occupations taking place across the globe, as one faculty member pointed out in a widely distributed email. But they are also conscious of their connection to the struggles of working people at home, and envision the movement as not only against increasing fees and bigger classes, but against privatization and for democratically controlled public institutions.

Campus unions are active in movement meetings and have been a force in protest actions. Likewise, students have frequently included worker demands as their own.

GEARING UP FOR THE 4TH

The push for March 4 has extended beyond the UC campuses. Committees are working on many campuses, and the breadth of the movement was clear for all to see at the January 10 meeting of the Northern California Coordinating Committee, which featured high school teachers, union leaders, and organizers from the Cal State system, among many others.

Bay Area organizers have been reaching out to public schools at all levels, including classroom presentations at high schools. Union endorsements for the March 4 actions have come from the San Francisco Labor Council, Los Angeles County Federation of Labor, California Teachers Association, Oakland Education Association, and many others.

Specific actions are still being planned, but wildcat strikes appear to be on the table in addition to big rallies. For the California Federation of Teachers, March 4 will build momentum for a month-long “March for California’s Future,” from Bakersfield to Sacramento, which will take off the following day.

There are plans for major rallies in both Oakland and San Francisco, at which students, workers, teachers, and parents will converge. Campus unions continue to be involved in planning efforts, and their plans for March 4 are in the works, with a worker and student strike possible. Picket lines could well surround the campuses, blocking business as usual.

At UC Berkeley, students opened the semester with a week-long “makeover” of the Anthropology building, designed to “reclaim public education” through presentations and seminars, organizing meetings, potluck dinners, and art exhibits. The prep continued last week with the “Rolling University,” which brought the “open university” model to four buildings in four days ahead of March 4.

Organizers from throughout California will be in Detroit April 23-25 for the Labor Notes Conference. We plan to meet with public education activists nationwide who’ve echoed the call for action on March 4, compare notes, and map strategy for the next stage of this long-term fight. We’ll see you there!

Marcel Paret is a sociology grad student at Berkeley.

Best of luck to the folks in Cali for the 4th and best of luck to mount an unlimited general student strike. Took us a 6 week general strike to more or less get 103 million back from the Quebec government in 2005.