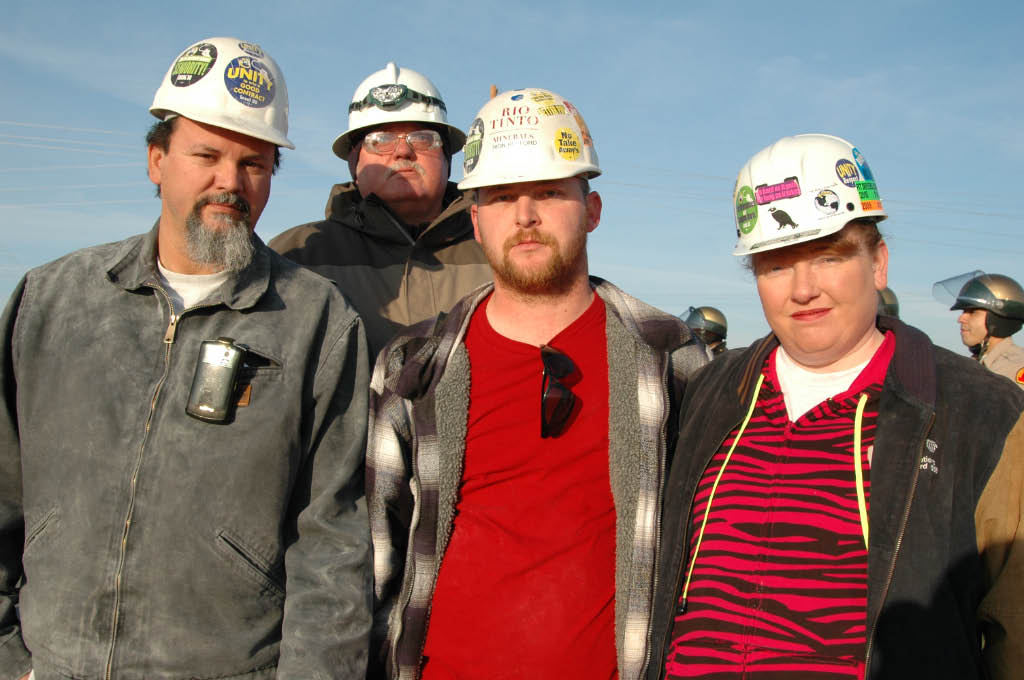 Mining multinational Rio Tinto locked out nearly 600 workers on January 31 from a California borate mine after workers refused contract changes that would destroy full-time jobs, blow up seniority, and undermine safety by putting workers in competition with each other. Photo: ILWU.

Copper miners occupying pits in northern Mexico are bracing for an invasion by federal troops after refusing to give up their two-and-a-half year strike. In Southern California, borate miners are locked out, insisting that the good union jobs don't become “junk jobs.” And in Ontario, nickel miners are in the same fight, holding strong after six months on pickets. Show your solidarity today.

Miners in northern Mexico are bracing for an invasion by federal troops. Since striking and occupying their mines in 2007 over serious health dangers at work, the copper miners have been a sore spot for a federal government itching to crush dissent in the labor movement.

Grupo Mexico, which owns the Cananea mine, saw a 2006 explosion at another mine bury 27 workers alive—termed “industrial homicide” by the union—after routinely disregarding workers’ safety concerns. The company was poised to continue its deadly negligence in Cananea, ignoring calls for safety improvements from workers and even the Mexican Department of Labor. Miners struck, and 700 state forces invaded the mines in 2008 and shot down three unarmed workers.

Emboldened by a recent court ruling favorable to the company, in which the union was not allowed to present evidence, Grupo Mexico is asking that federal troops wrench the mines away from the workers. “These miners are tough, they believe in their union, and they’re going to support their rights,” says Jerry Fernandez, international relations director of the Steelworkers.

Military intervention could mean a bloodbath in the mines of northern Mexico, further destabilizing a region torn asunder by drug wars and official corruption. The Steelworkers and other allies are asking for urgent appeals to Santiago Canton, executive secretary of the Inter-American Commission for Human Rights, urging him to ask the Mexican government not to use force against the Cananea miners, lest they become the mourned Cananea martyrs. Email cidhoea [at] oas [dot] org (Dr. Santiago Canton).

Miners in northern Ontario are entering the seventh month of their strike to protect pensions, bonuses, job security, and seniority rights. The Steelworkers represent 3,500 strikers at Vale Inco copper and nickel mines in Sudbury and Voisey’s Bay. They’ve partnered with their international union to globalize the fight against the transnational corporation, protesting at docks globally where scab ore is offloaded.

While the company has brought in scabs and sent engineers and non-striking union office workers into the mines to keep operations going, a local government-backed group reports the city is suffering a collective loss of $20 million a month as miners are unable to support local businesses.

Vale, the second-largest mining company in the world, is hiding behind bad economic times to attack workers, but the company remains flush, holding more than $22 billion in cash assets and increasing top executive compensation by 120 percent since 2006.

At the USW’s International union arm, Workers Uniting, you can keep up with the campaign and send a letter of support to strikers.

LabourStart has an online campaign where you can send letters to Vale executives, too. Look for the “Act Now!” logo at LabourStart.

Locked Out in California

Mining multinational Rio Tinto locked out nearly 600 workers on January 31 from a borate mine in Boron, California, in the High Desert northeast of Los Angeles. Borate is a mineral used in making glass and laundry detergent.

The miners, members of International Longshore and Warehouse Union Local 30, showed up to locked gates with their families that Sunday morning with their work clothes, hard hats, and lunch boxes. Security guards and police in riot gear turned them away. Rio Tinto buses in scabs supplied by Gettier Security to operate the mine.

The company is demanding a slew of arbitrary clauses that would turn good union jobs into “junk jobs,” including manager discretion to increase and decrease wages following biannual worker evaluations, with no appeals process. Promotions would be based not on seniority but on the boss’s whim.

The still-profitable company—which took in $4.87 billion last year—demands the right to cut full-time employees to part-time and to contract out at will.

Rank-and-filer Kevin Martz said the proposed system would undermine safety by putting workers in competition with each other. Linking wages to productivity would speed workers up.

Martz said the members want to head back in and start bargaining. “If they unlocked the doors right now and said, ‘You can get back to work and we can work this out,’ all of us would go back to work today,” he said.

Union members keep a 24-hour picket at every mine gate and are reaching out to surrounding communities in the High Desert to build support and counter Rio Tinto’s PR maneuvering. A December march and rally, blessed by a Mormon bishop, drew 400 guests to the union hall. A truck filled with 500 bags worth of groceries donated by the AFL-CIO arrived February 15.

On February 16 mining and maritime union leaders from around the world, meeting nearby, marched to the mine along with workers.

A version of this article appeared in Labor Notes #372, March 2010. Don't miss an issue, subscribe today.
Related
A New Union, At Last? Mexican Auto Parts Workers Get to Vote, Three Years After Strike Wave »
In a Landslide Victory, Mexican GM Workers Vote In an Independent Union »
Mexican Auto Workers to Choose New Union in Landmark Vote »
Christmas On Strike: Warrior Met Miners Stick It Out »
Interview: A Mexican Auto Worker on the Fight for a Real Union at GM's Silao Plant »