Mexican Mine Company Attempts to Buy Workers it Could Not Beat 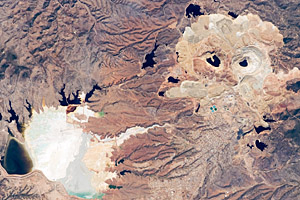 Unable to break the Mexican Miners and Metalworkers Union at Cananea, one of the largest open-pit copper mines in the world (seen here in an aerial shot), the mine owner is now trying to buy the workers with a big severance package. Photo: NASA.

For two and a half years, copper miners near the Arizona border have been on strike—and the mine’s owner and the Mexican government have been unable to break them.

Firings, threats, violence, court orders, an intimidating police presence, and the organization of rival company unions have not during all this time been able to break the Mexican Miners and Metalworkers Union at the Cananea mine.

Unable to beat the union, the mine owner Grupo Mexico is now trying to buy the workers with a severance package worth approximately 800,000 pesos or about $80,000 to each miner.

The union has refused the employers’ offer to end the strike through this process of serial severance of the workers. At a special union meeting last Saturday, 1,000 miners reaffirmed their commitment to continue the strike. Carlos Esquer, the union’s secretary for collective bargaining, has asserted that the strike can be ended either by negotiation or by turning the operation over to the union.

On Sunday, more than 1,000 miners and family members also braved snow and freezing temperatures to attend a rally where Andrés Manuel López Obrador denounced the owner of Grupo Mexico as part of the “Mafias of power” that dominate the Mexican government. López Obrador formed a shadow government in 2006 after Felipe Calderón was declared the winner of a controversial presidential election that many consider to have been fraudulent.

While Mexican media have reported that miners were lining up for their severance, Sergio Tolano Lizárraga, leader of Local 65 at Cananea, tells the press that the only workers who have filed for the severance were a few scabs who were brought in last year to try to break the strike. Production at Cananea, one of the largest open-pit copper mines in the world, has been stopped since July 2007.

Workers continue to man their posts on the picketline, Tolano said. He pointed to the massive participation at the union meeting and at the López Obrador rally as demonstration of the workers’ rejection of the company’s severance offer.

Grupo Mexico’s strategy at Cananea borrows a page from the Calderón government’s handling of the Mexican Electrical Workers Union. Last October the Calderón government dispatched federal police and military units to occupy the government-owned Light and Power Company’s facilities and to expel workers from them, then liquidated the company and fired the workers, offering them individual severance settlements.

Now the Mexican Electrical Commission, which absorbed the former Light and Power Company facilities, has begun to rehire only those workers who had accepted their severance—and only as employees of subcontractors.

The Mexican Miners and Metal Workers Union situation, however, is quite different, since the miners and metal workers have never permitted themselves to be completely ejected from the workplace. Also, their many workplaces in mines and mills scattered throughout Mexico make it much more difficult to attempt to crush the union in a single blow, as happened with the Mexican Electrical Workers union in October, where most facilities were concentrated in the Valley of Mexico. The Mexican Electrical Workers Union continues to fight for its members’ jobs, though now, four months later, chances of winning them back appear remote.

Related
A New Union, At Last? Mexican Auto Parts Workers Get to Vote, Three Years After Strike Wave »
In a Landslide Victory, Mexican GM Workers Vote In an Independent Union »
Mexican Auto Workers to Choose New Union in Landmark Vote »
Christmas On Strike: Warrior Met Miners Stick It Out »
Interview: A Mexican Auto Worker on the Fight for a Real Union at GM's Silao Plant »