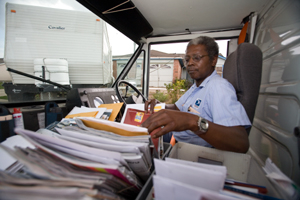 The Postal Service is in a financial crunch that threatens to slash both jobs and service to the public, and is seeking help in Congress. To avoid the fate of auto workers, forced to take concessions by politicians when their industry was bailed out, postal unions need to make their case in the court of public opinion and find allies in the communities they serve. Photo: Jim West | jimwestphoto.com

The Postal Service is in a financial crunch that threatens to slash both jobs and service to the public. After a shortfall of $2.8 billion in the 2008 fiscal year, losses in the first nine months of 2009 are already $4.7 billion.

The losses are due to several factors. The trend toward electronic bill-paying and email has shrunk postal income. On top of that, the recession has drastically reduced the advertising mail that is a mainstay of postal revenue. Mail volume in 2009 has dropped about 15 percent from 2008, with revenue falling about 10 percent.

Finally, the postal reform bill passed by Congress in 2006 required the Postal Service—which has more than 600,000 employees—to bank about $5 billion per year toward health premiums for future retirees, beyond the amounts paid for current retirees.

This requirement, imposed before the recession began, has apparently not been imposed on any other employer or government agency. Postal unions contend it’s an unnecessary burden on postal finances during a recession, and that a less costly formula would still keep retiree health care safe.

The Postal Service’s response to its money woes has been to consolidate mail processing operations and cut work hours, in part by eliminating jobs. It plans to close stations in areas served by multiple offices; the current list of around 371 candidates for closure has been sharply reduced by the opposition of American Postal Workers Union (APWU) locals across the country.

With encouragement and assistance from the national union, locals have used media, petition campaigns, and pickets to organize postal customers, build community alliances, and enlist politicians to prevent station closings.

The Postmaster General also wants Congress to give him the authority to eliminate Saturday delivery, saying this cut would save $3.5 billion a year starting in 2011. The two mail carriers’ unions, NALC (urban) and NLRCA (rural), oppose five-day delivery, which would eliminate tens of thousands of delivery jobs. That opposition, however, has not yet been manifested beyond lobbying Congress.

No-layoff clauses have given career postal employees a high degree of job security, but the Postal Service has other tools to use in place of layoffs. When management decides too many employees work in one location, junior employees can be forcibly reassigned hundreds of miles away. Many part-time employees have faced drastic work-hour reductions.

A $15,000 buyout offer, negotiated by the APWU and the Mail Handlers (NPMHU), is expected to shrink the workforce by at least 20,000. A two-year payout of $300 million would reduce payroll costs on the order of $1 billion per year.

APWU locals around the country have stopped consolidation of mail processing centers by reaching out to the community and pointing out the downsides: reduced service, job loss, and mail delay. Calling these efforts models for action, national APWU prepared a mobilizing toolkit for locals.

For years the APWU has criticized excessive discounts given to big business mailers. For example, a one-ounce large envelope that costs an individual 88 cents to mail costs as little as 38 cents for mailers—a far greater discount than the actual decrease in processing costs their pre-sorting achieves.

Corporate mailers have undue influence over postal decision-making, winning generous discounts that have undermined postal finances and led to the growth of a low-wage presort mail processing industry.
Rather than cut service to the public or make changes that hurt workers, says the APWU, the Postal Service should change big mailers’ rates to accurately reflect costs.

Both postal management and the unions tried to postpone advance funding of retiree health care. Days before a September 30 deadline, Congress passed a bill that saved $4 billion by reducing the 2009 payment—temporarily keeping USPS afloat. The Postal Service was “nearly insolvent, a heartbeat away from bankruptcy,” APWU President Bill Burrus said.

Instead of the three years’ relief unions sought, however, the bill affected only 2009, meaning that lobbying will begin anew for relief from a funding obligation many believe to be too much, too soon.
The legislation, however, avoided unfriendly Republican amendments that would have boosted workers’ share of health premiums and required arbitration of contracts “to take the financial health of the Postal Service into account”—a clause unions saw as an attack on bargaining rights.

The APWU contract expires in November 2010, and the NALC's in November 2011. A projected further drop in mail volume would keep the postal budget in a losing mode. Management and anti-labor politicians will be gunning for concessions. An APWU bulletin notes that a mailing industry executive “thinks the time has come for postal employees to start sharing some of the sacrifices.”

To avoid the auto workers’ fate, postal unions need to make their case in the court of public opinion and find allies in the communities they serve.

The APWU, the only postal union that has stated its intent to organize them, has a fund mandated by convention resolution that can be used only for such purposes. It is worth at least $7 million.

Some locals have put the money to good use. Local president Lance Coles, from Iowa, says his local will soon have more private sector members than motor vehicle service and maintenance members combined, but that it was a tremendous struggle to get them a first contract. He noted that for postal jobs advertised online at major firms like Pitney Bowes, mail processors nationwide are offered $8.50 per hour.

But APWU leaders have, at present, defunded organizing drives. Instead, they are focusing on lobbying for legislative goals and the faltering Employee Free Choice Act.

As the number of postal employees continues to shrink, the APWU needs to create a Plan B for organizing without EFCA, and resume organizing workers at postal-related companies.