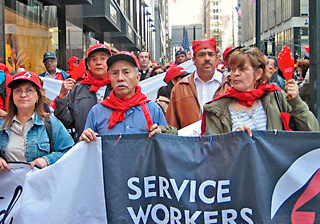 A delegation of U.S. food service workers flew to the Paris headquarters of their employer Sodexo last winter, delivering petitions against the company’s anti-union practices. They also took to the streets, joining French food service workers in the general strike rippling through the country. For one of the Americans, a member of Service Workers United, the act of solidarity abroad would have been a breach of contract back home.

UNITE HERE and the Service Employees (SEIU) had formed the joint union called Service Workers United, or SWU, in 2005. In secret talks with multinational food service giants Sodexo, Compass, and Aramark, the new union traded a lot—including workers’ right to strike—for contracts in a low-wage, hard-to-organize industry dominated by the “Big 3.” Aramark dropped out of the talks, but made a separate pact later that year.

To seal the unprecedented deals, contract standards were settled before the first worker signed a card. Workers faced termination if they slowed down or picketed. Conflicts over terms of the agreement would go before a national labor-management committee instead.

The companies, which have contracts to run cafeterias and concessions in schools, stadiums, and corporate offices, reserved the right to choose where the union would organize, and how many total members could join.

The Big 3 scattered approved organizing sites across the country and forced the union to pull the plug on other drives. The union could reject a site management selected, but it would still count against the quota. The companies also established separate expiration dates for each shop, atomizing members’ bargaining power.

Four years later, the deals with management have collapsed, UNITE HERE and SEIU are embroiled in conflict, and restless food service workers aren’t waiting for distant leaders to come to their rescue.

As lead negotiator in the 2005 talks, then-UNITE HERE president Bruce Raynor fashioned a national “boilerplate” contract for all SWU members. The new union, christened UNITE HERE Local 2552, set up in the International’s Manhattan headquarters. The office opened a “Workers’ Resource Center,” an 800 number workers were to call for step two grievances. The “national local” assigned each worksite a representative from the nearest UNITE HERE or SEIU local to work with stewards and bargain contracts.

Since details went public last year, the SWU deal has been used to both exalt and disparage organizing-by-partnership models. “We’re dealing with companies that don’t make decisions in our community; they make decisions in their central offices,” said Raynor, in a union video. “And the union has got to have the scope and power to match up with that company.”

Jim Dupont, a former SWU negotiator and now head of UNITE HERE’s Laundry and Food Service division, says SWU’s terms curtailed workers’ ability to fight the boss. “SEIU’s definition of partnership is you do what the company wants,” he says. “Our definition is, you’re treated as an equal.”

After the 2005 deal was struck, hundreds of workers like Daqwell Carrasquillo got called into meetings with their employers where SWU organizers asked them to sign union cards. Now a steward at Blue Cross Blue Shield’s cafeteria outside New York City, Carrasquillo said workers eagerly agreed, and days later had a first contract modeled on the national template. It included job security and seniority language, wage increases, health care, and pensions.

It was an improvement from the non-union days, but well below the standards of other unionized food service workers.

At Chicago’s UNITE HERE Local 1, food service contracts are “very much a work in progress,” according to organizers. Their stronger contracts peg starting pay at $13 an hour. A hundred SWU members at a DePaul University cafeteria, meanwhile, start at $9.25. Under the 2005 deal, companies agreed to pay members at least 50 cents above minimum wage.

Before SWU was formed, UNITE HERE Local 100 represented about half of Aramark food service workers in New York City. President Bill Granfield viewed SWU with cautious optimism. “We didn’t expect SWU members to fall in and hit our standards right away, but we were going to get a bunch more people in,” he said.

The crown jewel of Local 100 contracts, full family health coverage, is a far cry from what their fellow members at SWU have achieved. New York’s SWU members, with salaries around $20,000, pay monthly contributions of up to $400 for family plans.

Four years later, standards nationwide haven’t risen, and the merits of SWU are under fire from members. Carrasquillo and his co-workers haven’t had a raise since 2007, and when they violated the SWU agreement by leafleting outside work for better terms, the company called police.

Now in talks over a second contract, Carrasquillo says the company won’t budge. “Sodexo is cocky,” he says. “They come right out and tell us SWU already agreed to boilerplate contracts, and we can’t change it. But I never voted on anything.”

Granfield says his local planned to break out of the template agreements but SWU leaders haven’t supported his bid. “The local negotiations have been totally limited by the framework at the top,” he says. “We wanted to make strides in second contracts, but that was not SWU’s program. That’s when we started getting angry.”

UNITE HERE’s conventional contracts with Aramark were expiring in late 2007, right as the union and company bargained a new national agreement for SWU. SEIU joined UNITE HERE in a nationwide campaign: strikes erupted in Granfield’s New York local, as well as at UNITE HERE shops in Vancouver, Ontario, and Boston, adding leverage to the SWU talks. SEIU pushed new organizing drives against the company.

Soon after, in summer 2008, Raynor struck an organizing deal with Aramark that UNITE HERE leaders criticize. Dupont says he was kept out of the room while Raynor allowed the company to maintain control over new organizing, forcing SEIU to interrupt an Aramark drive in Houston.

Raynor’s Aramark deal—which later fell apart—added fuel to burning divisions within the union that blew up in March, when he pulled 100,000 members out of UNITE HERE and into an affiliation with SEIU.

But the feuders remained attached at the hip by their joint union, and haven’t accepted a mediator’s proposal to settle food service jurisdiction geographically.

SWU’s leadership is now a part of UNITE HERE only in name. Its two appointed leaders, one from SEIU and one from UNITE HERE, both supported the March exodus. They’ve been reassigning servicing of SWU members to SEIU locals, strengthening the Service Employees’ presence in the industry. Currently, UNITE HERE claims 60,000 food service members nationwide—SEIU has far fewer.

There’s emerging anger in the ranks about SWU. After Carrasquillo filed five grievances through SWU’s call center that weren’t resolved, he picked up the phone again, joining national conference calls with other SWU members two years ago. At UNITE HERE’s June convention he presented a petition signed by 1,000 members demanding a SWU bill of rights. The call for local control, elected leaders, and an end to backroom deals passed, but has no binding effect.

SWU leaders say no national deals currently exist (Compass and Sodexo have failed to give permission for new units), and that the UNITE HERE split has disrupted attempts to resume talks with the Big 3 over new card check arrangements.

They echo SEIU’s call for a settlement so companies can no longer use the rift as an excuse to keep dues in escrow, stall contract talks, and block new organizing. UNITE HERE leaders have sued over the split, willing to pursue a protracted legal process.
“If it takes a long time stop the growth of this corporate unionism, then so be it,” says Dupont.

Raynor calls SWU the most successful private sector organizing project labor’s seen in years—and a model for the future. SWU President Kurt Edelman says the union is mobilizing members (dozens just met in D.C. to lobby for a child nutrition bill) while organizing new ones. Acknowledging lagging contract standards, he hastens to add: “They’re better than what people would get without a union.”

UNITE HERE blasts that idea, pointing to its approach to hotel chains, where a coordinated campaign of strikes and mobilization won new card checks—and contracts that didn’t drag down industry standards.

Four years ago, UNITE HERE and SEIU were on the same page. They left the AFL-CIO, signing partnerships with food-service CEOs soon after. SWU, Dupont says, actually sprang from Wilhelm’s idea to combine the two unions’ efforts at common, institutional workplaces.

But what to do once the deal was signed divided the unions. UNITE HERE leaders saw SWU as a temporary project and claim the two unions had agreed to phase it out. Raynor and Stern want to preserve SWU and the employer-approved approach that gave it legs. Now, UNITE HERE intends to make sure that SWU doesn’t expand.

“We’re not going to let them enter this jurisdiction and be the company’s favorite cheap alternative,” Dupont says. “They want to be the Wal-Mart of unions.”

A version of this article appeared in Labor Notes #366, September 2009. Don't miss an issue, subscribe today.
Related
Global Cleaning Workers Share Their Struggles as the First Line of Pandemic Defense »
Chicago Health Care Workers on Strike for Safe Staffing, $15 Minimum, PPE »
Why and How SEIU Members Are Calling on Our Union to Expel Cops »
Twin Cities Janitors and Guards Feature Climate and Housing in Their Strike Demands »
Eight Thousand Hospital Workers Strike in Seattle »

Its amazing that Labor Notes articles continue to refer to the no-strike clause in SWU contracts. It's no different than almost all contracts and its a temporary agreement to not strike if the company honors the contract. Its just disgusting that Labor Notes plays on peoples' ignorance of typical union contracts. Nothing in it says members can't go to rallies in France. Labor Notes should come clean about their close relationship with UNITE HERE which dictates to them the job of propaganda mouth piece for one small, weak side of this debate and conflict.

Selling out workers for your own personal gain and influence worked for St Ronald Reagan when he was a union president and started him out on his political assent and gave him right wing corporate money backers. So I guess you could say that Andy and Bruce are just taking a traditional path to personal power.

It is great that Brother Carrasquillo has the ability to fight for his rights with his union - something he would not have without the SWU agreement. Why doesn't this article tell us how many of the "Big 3" Food Service workers have been organized by UNITE HERE since they blew up the SWU Agreements? The silence speaks for itself! The theory that we should keep workers out of the union until we can acheive the standards that we have acheived over many years in the (very small) pockets of this huge and growing industry, where we have some power, is the real travesty here. We will never see real union growth outside of a handful of cities/states if we just keep doing the same thing that has been proven not to work.

Dear Wal-Mart Union apologist,
SWU itself is not the problem. The problem is, when UNITE HERE had Aramark on the ropes in 2007 and was in position to demand a new national agreement with teeth, Bruce Raynor sold out the workers. He crept off with management and made a sweetheart deal that did NOT EVEN include recognition for non-union Aramark workers who had gone public with the demand for card check neutrality. It was a sell out designed to maintain Raynor's personal clout with Aramark at the workers' expense. He sucks, and so do you (with all due respect).

Point of verification, UNITE HERE NEVER had Aramark on the ropes, it was always the company of the big three that UH had problems dealing with. I am not a fan of Raynor but the sweetheart story just isn't true.