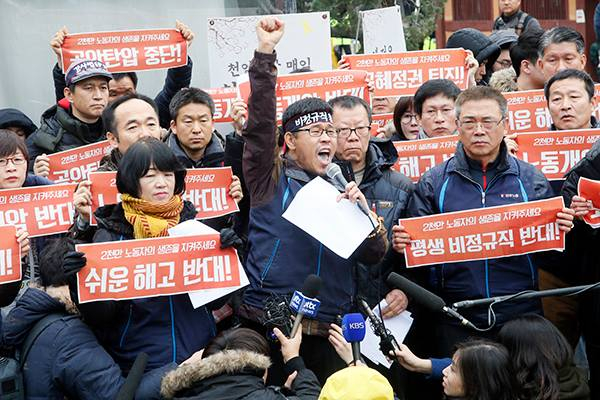 Prosecutors got a five-year jail term for Han Sang-gyun, leader of South Korea's 800,000-strong independent union federation. In December, as he left the Buddhist temple where he had been taking sanctuary, Han wore a bandanna with the message, "Stop temporary hiring." Photo: KCTU.

This article has been updated after Han's sentencing. The original version was published June 23. —Ed.

On July 4, a South Korean court sentenced Han Sang-gyun, president of the 600,000-strong Korean Confederation of Trade Unions (KCTU), to five years in prison and a fine of about $500.

Even in a country that was once moving toward democracy but is now rapidly eroding back to authoritarianism, this jail term—the second one for Han—is extraordinarily lengthy for a union leader.

The court convicted Han of all eight counts against him, stemming from traffic and public-safety violations in connection with about 12 unauthorized rallies and protests he or the KCTU called since 2012.

The conviction came despite a warning that the United Nations Special Rapporteur on Human Rights issued to South Korea in June: “Charging assembly participants with certain criminal offenses, such as the general obstruction of traffic, de facto criminalizes the right to peaceful assembly.”

The court accepted a government case that Han had incited violence at a November 14 rally in central Seoul, when he yelled, “Let’s show we can bring Seoul to a stop. Let’s advance toward the Presidential Palace.”

It also held the union leader criminally liable for property damages and personal injuries sustained in the rally. “Constitutional freedoms are not unrestricted,” judge Shim Dam said in the verdict. “Only peaceful assemblies can be protected under the concept of freedom of assembly stipulated in the Constitution.”

The rally indeed turned violent, not because of the tens of thousands of workers and citizens who were protesting two-tier-wage legislation and government austerity measures, but because riot police cordoned off the streets and water-cannoned the otherwise peaceful protesters.

After the rally Han, already wanted on an arrest warrant, took sanctuary at Jogye Buddhist temple, in central Seoul, where he stayed for 24 days before turning himself in to the police. The government summoned about 1,500 other rally participants for investigation.

Elected on a Pledge to Fight

In December 2014 Han was elected KCTU president in the first-ever non-delegate, direct vote in the federation’s 19-year history. He was also the first president elected on a pledge to organize a general strike. “They [the government and business owners] were aiming to annihilate the KCTU, and we had little option but to fight back,” Han said in court June 13, explaining why he had run.

Under Han’s leadership, the KCTU twice called for a general strike. But both calls ended in only symbolic stoppages, adding to a grim picture for South Korean labor.

The country’s unions, once one of the best organized and most militant segments of the global labor movement, have suffered a series of setbacks since the late 1990s, when the government made it easier for employers to lay off workers and hire casuals. Fewer than one in 10 workers is now unionized, the country’s lowest level ever, including in the 1970-80s when Korea was under a harsh military dictatorship.

One in seven workers in effect takes home less than the legal minimum wage of about $5.15 an hour, because they are casual workers and thus not fully protected by law.

These defeats, coupled with the ongoing economic recession, have divided union leaders and demoralized members.

Much of the religious establishment, once shelter for political dissidents, has turned a blind eye to labor’s agony. Han initially planned to organize a general strike while in sanctuary at Jogye temple, home to the country’s largest Buddhist sect.

But from day one of Han’s sanctuary, the leadership of the sect, implicated in a series of corruption scandals, quietly mobilized a group of loyalists to evict him. During his 24-day sanctuary, Han often scuffled with these henchmen who, on one occasion, stripped him almost naked.

South Koreans are seeing the clock rapidly turned back on the democracy they won in the late 1980s after three decades of campaigning against military rule.

Since she took office in 2013, President Park Geun-hye, daughter of the deceased military strongman Park Chung-hee who ruled 1961-79, has dissolved a small left-leaning party for its flimsy link with North Korea.

She also outlawed a 200,000-strong teachers union for financially supporting 20 unionists fired from their jobs for union activity.

Park’s election was widely believed to have been aided by the National Intelligence Service, the country’s intelligence agency, which ran massive online campaigns to tilt the electoral balance in her favor. Revamped under Park’s regime, the NIS has allegedly placed much of Koreans’ texting under real-time surveillance.

One of Park’s aides funneled funds from a big-business lobby to a far-right group that routinely mounted counter-protests to rallies by union and political activists.

Faced with an ever-slowing economy, the South Korean government has chosen to ratchet up pressure on unions. It's trying to use the recession to destroy organized labor.

This month the government said it would raise $95 billion in public funds to bail out shipbuilders, the country’s cash cow hit hardest by the global recession. Not a single dime was earmarked for job protection. Mass layoffs are expected.

Businesses are trying to impose a wage ceiling for employees aged 55 and older, on the pretext of addressing youth unemployment—a brazen scheme to slash wages for both first-time job seekers and senior workers.

Rank-and-file anger and frustration from below are so palpable that periodic rallies by the KCTU and other opposition groups draw tens of thousands of citizens and workers.

South Korea’s government and business leaders want to put Han away because he represents a pivotal segment of what is left of labor militancy. Indeed, the 54-year-old Han is one of a handful of individuals who have led during critical moments in South Korea’s volatile labor history, when anger and frustration turned into action.

Han was born and raised in the outskirts of Kwangju, the southwestern city where students and workers rose up in May 1980 against a military coup led by another dictator, Chun Doo-hwan. In a country where until 1992 regime changes happened only through coups or martial law, coup organizers could generally silence opposition with mass arrests and violent crackdowns on protests.

Kwangju in 1980 was different. In May students and workers fought a crack force of paratroopers for five days and eventually drove them from the city. Some protesters formed a militia with firearms they seized from city armories. Han, then an 18-year-old high school student, joined that militia, which controlled the city for five days before being brutally crushed by the military.

“I was feisty and young and could not sit by when the bloody carnage was underway,” Han said in a press interview. “Although I was young, I knew it was wrong [of the paratroopers] to kill innocent people.”

The uprising ended in massacre. The number of civilian dead has never been determined but is believed to lie between 200 and 600, including at least 40 high school students. By any count, more workers were killed than students, attesting to who waged the uprising to the last.

In the summer of 1987 Han again found himself at a critical moment in South Korea’s labor history. Mass protests won major concessions from the Chun government and triggered an independent union movement that formed 2,600 new unions in three months.

Han was one of the founding organizers of the union at Ssangyong Motor. In 2008, when he was elected chair, Ssangyong was in crisis. The country’s number-one producer of SUVs, the company had launched no new models since 2004, when it was sold to China's SAIC Motor Corp. The new owner did not seem to want to capitalize on the global SUV boom, but instead shipped sensitive technology to its Chinese headquarters. Indeed, in 2008, SAIC launched Roewe, a knockoff of Ssangyong’s popular SUV, in China.

In 2009, Ssangyong sought receivership and said it would lay off 2,646 workers—37 percent of the workforce. In response Han and 1,700 fellow unionists took over the plant. The occupation lasted for 77 days until it ended in a bloody crackdown by the police.

Han was arrested and served a three-year jail term. Management had to make concessions, too. It put 48 percent of the 2,646 on unpaid leave—with uncommitted promises to hire them back when business picked up.

For Ssangyong workers, and other South Koreans in a similar situation, layoff was painful because it meant they lost not only jobs but also company-subsidized housing and other benefits. Their desperation was epitomized in their two slogans during the strike: “Layoff kills” and “Let’s survive together.”

The 77 days of occupation were deadly stressful. The last 700-plus occupiers were blacklisted and could no longer find jobs in the industry. About 28 Ssangyong workers have since committed suicide or died of PTSD-related conditions.

In November 2012, upon being released from prison, Han staged a sit-in at the top of a 124,000-volt electric transmission tower near the Ssangyong plant, 164 feet from the ground, for 171 days, demanding the reinstatement of his fellow workers.

It took yet another three years of campaigning before, in December 2015, Ssangyong, now part of India’s Mahindra Group, finally agreed to reinstate 179 laid-off workers over the next two years and to prioritize those affected by the 2008 cuts over other candidates when filling future vacancies. The company also dropped lawsuits against the union and created a $1.5 million fund to help laid-off workers and their families.

Han has been assuming larger and larger roles in South Korea’s labor movement since his teenage years. His activism has been pivotal not only to workers' rights, but also to democratic rights. Now that he is facing a heavy jail term for defending these rights, he and his fellow KCTU members need our solidarity.

“As long as my comrades think of me as not guilty," Han said, commenting on the sentence, “I am not guilty.”

Kap Seol is a freelance writer based in New York. You can send a protest message to President Park via email or Facebook. Follow the KCTU on its English Facebook page.