Auto Parts Workers Battle Demand to Cut Wages in Half 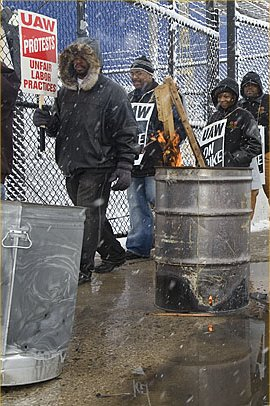 Picketers at American Axle talk about the need to draw a line in the sand—or snow—against spiraling concessions on wages, health care benefits, and pensions. Photo: Jim West

Holbrook Avenue is a busy thoroughfare stretching from I-75 to downtown Hamtramck, a small town enclosed on all sides by Detroit. Cars honk in support of striking members of UAW Local 235 as they pass five picket lines filled 24 hours a day on both sides of the street along the large American Axle and Manufacturing (AAM) complex.

There are five more lines going south on St. Aubin Street, and two to the north. Spirits are high, and strikers are dressed warmly to face the bitter tail of winter weather.

More than 3,600 American Axle workers have been on strike since February 26 at this plant and four other plants in Detroit and Three Rivers, Michigan, and two Buffalo suburbs, Cheektowaga and Tonawanda, New York. The plants produce the axles and parts for every General Motors light truck and SUV built in North America. Their chokehold on auto production was quickly felt: 28 GM plants at press time have stopped their lines as a result of the strike.

LINE IN THE SAND

Many workers prepared for the strike and are ready to stay out as long as it takes. One Detroit plant worker had gone as far as putting aside money for two years in anticipation of the strike. When asked about how he was faring four weeks into the strike he replied, “like a piece of cake.”

Picketers talk about the need to draw a line in the sand against spiraling concessions on wages, health care benefits, and pensions.

American Axle stands out in the U.S. auto industry because it has stayed profitable since spinning off from General Motors. Staying in the black hasn’t stopped the company’s CEO, Dick Dauch—who himself averaged $14.5 million in annual compensation between 2003 and 2006—from demanding two-tier wage concessions.

In 2004, American Axle workers were told by the company and the UAW International that they had to accept two-tier wages. Although the AAM contract was voted down in the Detroit flagship plant, it passed nationally over job security fears.

In 2007, two-tier wages were expanded to the Big 3. Now AAM wants the same wage scale found at those companies, a scale that nearly halves starting wages from $27 to $14 an hour.

Strikers, for their part, are demanding wage parity with Ford and Chrysler axle workers, where the union never conceded on two tier. Shifting Gears, a rank-and-file newsletter distributed at all American Axle plants, has consistently hammered over the last year on the need for wage parity in its pages.

Community and union supporters have been a constant presence on the picket lines—as has their food and donations. GM, Chrysler, Ford, and Delphi workers stop by the lines and commonly voice their support for the kind of strike action they wished they had seen at their companies.

“We know that American Axle workers got two-tier [wages] in 2004, and in 2008 it was forced on us,” said one such picket line supporter, Marcus Hamilton, a Pontiac Truck and Bus worker. “If they force wage cuts on seniority workers at a profitable company, it will come back on us next time...This is a class war.”

Plant closings are also a major issue in the strike. After the union refused to open up the contract in 2006 to grant concessions, the company idled Buffalo Gear and Axle plant despite “no plant closing” contract language. The work was moved to American Axle operations in Mexico.

The corporation may be using its profitability to maneuver away from union shops. Last September, American Axle opened a non-union forging operation in Oxford, Michigan, and declared that it wanted to close two forges covered by the contract.

There are now only 3,600 workers left in plants covered by the national pattern agreement, and the company wants to eliminate 1,000 more.

The strike is technically not over plant closings or wages, though. The UAW has filed a complaint with the National Labor Relations Board that the company has withheld information during negotiations. The annual cost of the prescription drug plan and vision plan, and the company’s calculations on the per-hour cost of retiree health care and pension plans, were among the points of information the company withheld.

After the strike began, documents surfaced from negotiations showing that prior to the strike, the UAW International had been willing to cut both skilled trades and production workers’ wages by up to $5 an hour.

American Axle said it has offered the union at the table retirement incentives, buy-outs, and lump sum payments in exchange for permanently lower wages. (Many in the workforce have put in almost 15 years and would be foregoing secure pension and health care benefits if they accepted lump sum payments.)

At an informational meeting at Local 235, members told international reps that they would not pass a contract that contained deep cuts. Several locals have passed motions to see the actual contract language at least a week before the vote and to have observers at the ballot boxes and during the vote count.

Many of the strikers have been moved by the picket line solidarity.

“Our members have been surprised by the support from the community, which is just as good if not better after three weeks,” said Kevin Bushouse, an executive board member at Local 2093 in Three Rivers.

“Many of us see how important it will be for us to support others when their time of need comes.”

Wendy Thompson is a retired president of UAW Local 235 who was on the national bargaining committee in 2004 and worked at the Detroit Axle plant for 33 years. She is also on the steering committee of Shifting Gears.