New Voice in Wisconsin Protests: No Concessions, No Cuts 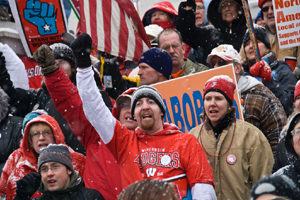 With the largest protests in Wisconsin history unfolding, labor activists are drawing on a new sense of power to reject both their union leaders' concessions and the massive service cuts the governor proposes. Photo: Sue Ruggles.

A day after 100,000 people demonstrated in Madison—one of the largest protests in Wisconsin history—labor activists gathered to strategize with a new-found sense of power. Andy Heidt of AFSCME Local 1871, a union of county workers, repeated a recurring theme of the day: “One hundred thousand people do not need to beg.”

About 70 people gathered in Madison for an emergency meeting called by National Nurses United under the banner of “No Concessions.” Panelists and attendees were unhappy about public employee union leaders’ signals that they would concede on all pay and benefit take-backs demanded by Governor Scott Walker in exchange for preservation of collective bargaining rights. The givebacks would amount to 8 percent pay cuts for state workers.

Participants also viewed Walker’s proposed social service cuts as unacceptable. The state budget the governor introduced Tuesday contained $1.5 billion in cuts to education and local government. This included sweeping changes to the state’s Medicaid program providing health care coverage to low-income families. The income benchmark for enrolling in the program would drop from $1,800 per month to $1,100—and 70,000 people could lose coverage. Walker’s bill could also force forfeiture of more than $46.6 million in federal transit aid, more than half the state’s federal transit aid.

The consensus was that these attacks on Wisconsin’s poor and working class are designed to divert attention from the real culprits behind the state’s fiscal problems—tax cuts for corporations and the rich, whose profits and incomes have continued to soar during the recession.

Jan Rodolfo of National Nurses United reviewed panelists’ main points: Blame should be placed on Wall Street for the country’s economic woes, not on workers. The solution to budget challenges lies in taxing the rich and closing loopholes—not in Walker’s budget cuts. Gains for workers must be considered as much a priority as saving collective bargaining rights.

Rodolfo asked the group to consider what result would qualify as a victory in the rapidly evolving landscape of Wisconsin’s labor battles. The group offered several ideas.

“We should involve the public in a participatory budgeting process and put forward an alternative budget that relies on increased taxes on the rich rather than cuts in social services for the poor and cuts in pay and benefits for public workers,” said Patrick Barrett, a University of Wisconsin staff member.

Participants spoke of the need to maintain momentum and keep up the unprecedented unity in the labor movement that has emerged over the last two weeks. Speakers advocated reaching out to non-union workers, emphasizing how Walker’s plans will affect them.

Others spoke of redirecting public resentment of union benefits and wages by showing how political leaders and their corporate supporters manufactured the budget crisis for their own benefit. While the image of shared sacrifice is often invoked by political and union leaders, corporations and rich people have not contributed their fair share to Wisconsin for years. Currently, Wisconsin allows the exclusion of 30 percent of capital gains income from taxation.

In 2010, this tax break amounted to $151 million, according to a report from the non-partisan Institute on Taxation and Economic Policy. The $82 million in tax cuts proposed in Walker’s budget would exclude even more capital gains from taxes.

Participants have scheduled a “No Concessions” event for Thursday at 5 p.m., which will include a New Orleans jazz funeral procession protesting Walker’s planned program cuts, with a rally after that at the Capitol.

Related
Open Bargaining Brings the Power of Members to the Table in Berkeley »
Who Holds the Power in Joe Biden’s White House? »
Employers Are Using the Crisis to Push Concessions They Don't Need »
New Jersey Welfare Workers Sound the Alarm on Safety »
New York City Retirees Fight to Defend Their Medicare Benefits »

Demands:
CALL FOR A GENERAL STRIKE

END THE WARS OF AGGRESSION / BRING OUR CHILDREN HOME

Picket the AFL/CIO Western Conference at the Oakland Airport Hilton April 9, from 9:30 AM to?