WOODBURN, Oregon: Farmworkers brought to the U.S. in the H-2A visa program plant and weed ornamental shrubs early in the morning in a field near Woodburn, Oregon, for the nursery Advanced Ornamentals. Alfonso Guevara works with a short-handled hoe, the cortito, that has been banned in California because repeated use causes damage to the spine. Photo: David Bacon

In November 2021 the U.S. Attorney in Georgia filed a case against 24 growers and labor contractors for abusing workers in the H-2A temporary contract labor program. The complaint included two deaths, rape, kidnapping, threatening workers with guns, and growers selling workers to each other as though they were property/slaves.

While shocking, these abuses are just the latest, and commonplace. For decades the H-2A [guestworker –Eds] program has abused workers recruited from other countries and pitted them against workers in the U.S. in a vicious system to keep worker wages low and grower profits high.

A pioneering report by the Southern Poverty Law Center in 2013 called the program “Close to Slavery.” The Georgia case shows plainly that this was no exaggeration.

In 2007, when Santiago Rafael Cruz was sent by the Farm Labor Organizing Committee to fight corruption in the H-2A recruitment system in Mexico, he was tortured and murdered in his office, undoubtedly by the recruiters. His murderers were never caught.

In 2018 Honesto Silva, an H-2A worker, died in a Washington State field as he labored in extreme temperatures and forest fire smoke. When his co-workers protested, they were deported—a fate that awaits all H-2A workers who assert their rights. 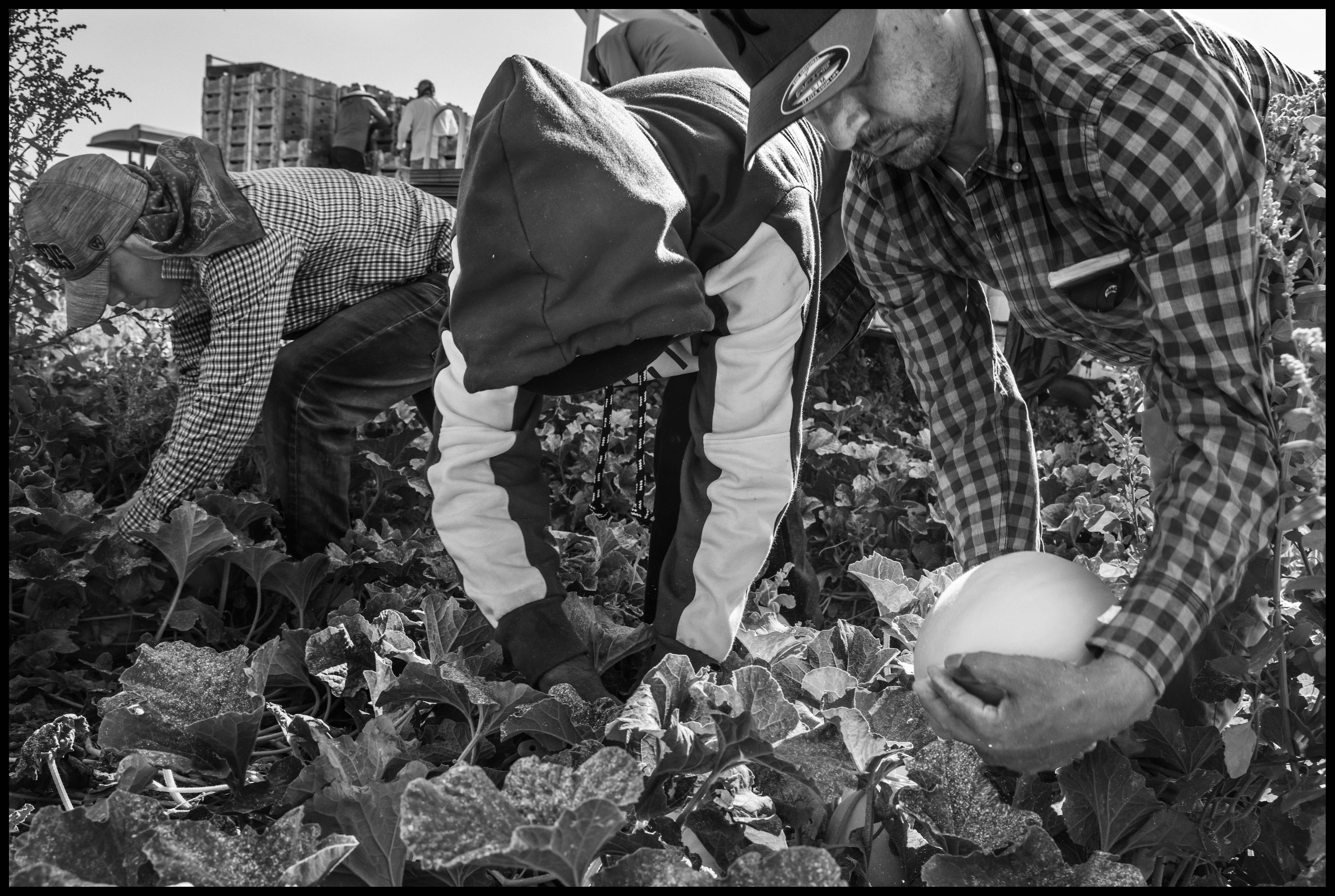 FIREBAUGH, California: Farmworkers brought to the U.S. in the H-2A visa program harvest melons early in the morning in a field near Firebaugh, in the San Joaquin Valley. The temperature at the time, about 9 in the morning, was over 95 degrees, and would reach over 110 in the afternoon. These workers are Cora indigenous people, recruited from the Mexican state of Nayarit. It was their second day of work in the U.S. and they were not yet accustomed to the heat. One worker fainted and got a nosebleed from the heat They worked for the Rancho Nuevo Harvesting Co. labor contractor, in a field that belongs to the Fisher family, a large California grower. Photo: David Bacon

In a nationwide rash of Covid deaths among “guest” workers, two workers died at the Gebbers Farm in eastern Washington last year.

THE ABUSE IS BUILT IN

Enforcement of criminally weak protections for H-2A workers is virtually non-existent. While the Georgia case indicted 24 violators, it only highlights the enforcement vacuum. In 2019 the Department of Labor punished only 25 of the 11,000 growers and labor contractors using the program—24 more will not change the nature of this program.

Last year growers were certified to bring in 317,619 H-2A workers. That is over 13 percent of the farm workforce in the U.S., and a number that has doubled in just five years, and tripled in eight. In states like Georgia and Washington, this program will fill a majority of farm labor jobs in the next year or two.

There is no way this program can grow at this rate without forcing from their jobs the farmworkers who live in the U.S., over 90 percent of whom are immigrants themselves.

The H-2A program cannot be changed by filing legal cases against a few growers. Calling for reforms and better enforcement is ineffective. The abuse is built into the program. It is systemic, not just a minor problem that can be fixed. And neither Republican nor Democratic politicians have shown any appetite for denying growers access to a program that supplies labor at a price the growers want to pay.

Recruitment of temporary workers is dominated by a few huge wealthy corporate recruiters, in a completely corrupt system that cheats workers and charges them for the “privilege” of being exploited. Recruiters have a history of violence, and have operated a legal blacklist system since the program started.

The program destroys communities of farmworkers already living in the U.S., who have labored to put food on the country’s tables for decades. While growers are not supposed to replace resident workers with H-2A workers, they laugh at the prohibition and devise clever ways to manipulate the system.

The so-called “Adverse Impact” wage floor in reality functions to keep farmworker wages just slightly above the legal minimum, making poverty the normal and permanent condition for farmworker families. H-2A workers can’t demand more without being deported. If resident workers demand more, they are threatened with replacement by temporary workers.

For more than two decades, the heroes of our civil rights movement fought the bracero program, the ancestor of the current H-2A program. They helped braceros strike and fight deportations where they could, and organized resident farmworker to call for ending the program. They didn’t fight for “better enforcement” or for ineffective reforms. They fought to end the program entirely, and won a great victory when Congress repealed Public Law 78 in 1964. We should look at the example passed on to us by Ernesto Galarza, Bert Corona, Cesar Chavez, Dolores Huerta and Larry Itliong, the Agricultural Workers Organizing Committee, National Farm Labor Union, Packinghouse Workers and other unions, who didn’t let Washington politicians tell them that ending the program wasn’t “realistic.”

We need not just to end the H-2A temporary worker program, but to force Congress to allow people who to come to the U.S. to work as farmworkers to receive permanent residence visas, without being chained to growers or other corporations. 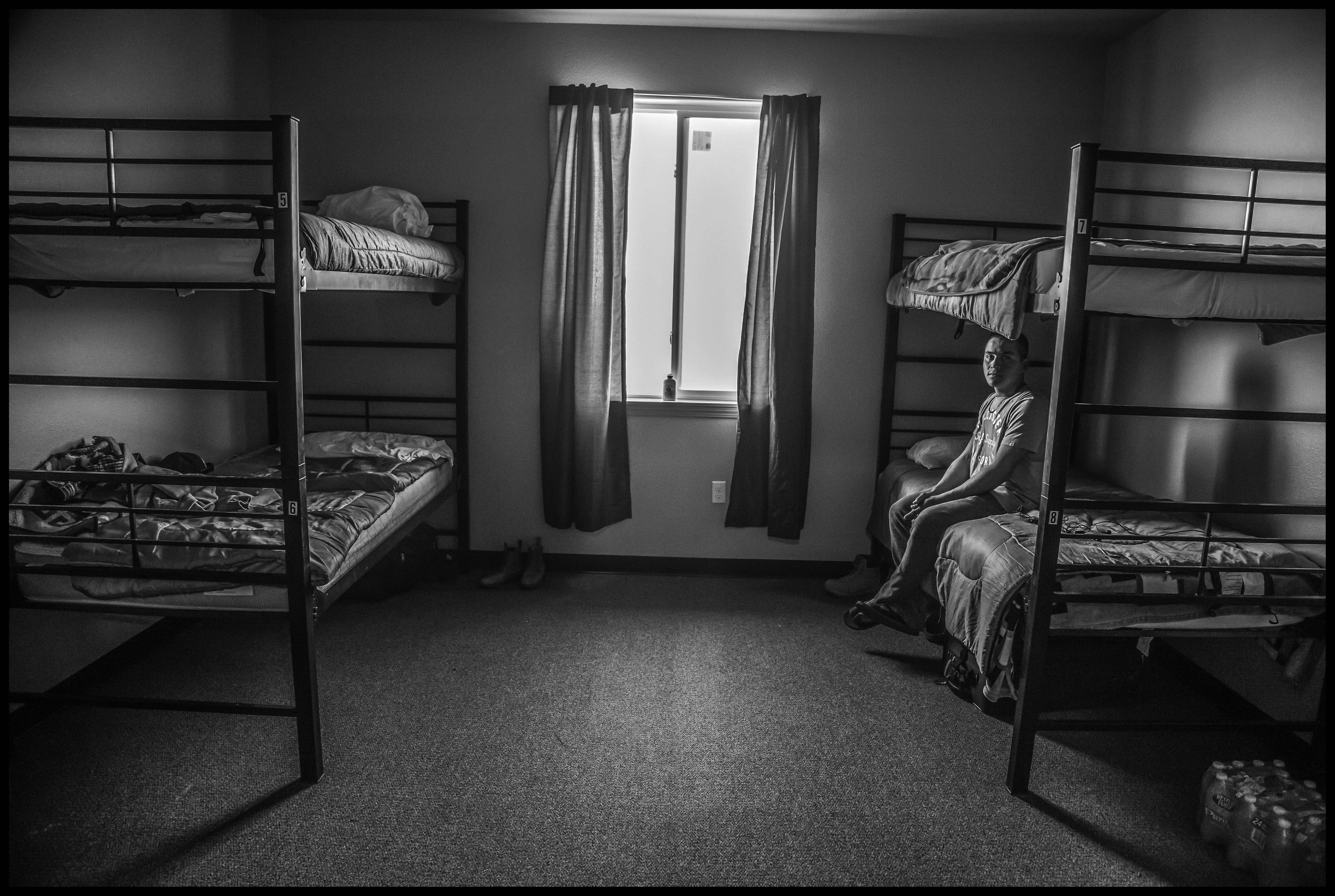 ROYAL CITY, Washington: An H2A contract worker in the room he shared with three other workers in the barracks where they lived in central Washington. These barracks belonged to Stemilt Growers. During the pandemic barracks rooms like this, with four bunkbeds, were sites of Covid infection because workers slept and lived in such close proximity to each other. Photo: David Bacon

Instead of 317,000 visas of exploitation, we need visas that will allow migrants to live and work freely, with the same rights all other workers have, or should have. Migrants coming to work shouldn’t be held captive, in isolated barracks behind fences, but should be part of the farmworker communities already here.

Half of the farmworkers living here also need permanent residence visas, a step to citizenship for those who want it. Changing the registry date, a current reform proposal, would help many people get legal residence status, but it’s just a down payment—a step towards legal status for every person who needs it.

Real legal status is no answer, for the undocumented or for H-2A workers, to the endemic poverty of this country’s farmworker communities, however. We want an end to poverty for all farmworker families.

In the 1970s the farmworkers who belonged to the United Farm Workers made wages that started at twice the minimum wage. That is the bare minimum today that would give families a decent life and future.

What can we fight for beyond ending H-2A abuses?

Because the H-2A program is a powerful weapon used by growers to keep farmworker wages at their current poverty level, getting rid of it is a basic step for farmworker justice. And because growers will not give up a system so advantageous to them, or voluntarily double farmworker wages, we need a movement that will force them to do that.

It will have to use the weapons farmworkers used in past decades—the strike and the boycott, and legislative change. And just as the grape strike in Delano in 1965 united Mexicans and Filipinos, today’s movement will have to unite resident workers and H-2A workers.

Working people in this country, farmworkers included, are organizing and striking in a wave of workplace activism we haven’t seen for a long time. The time to make our demands is now.