Mexico’s Only Independent Farmworker Union Struggles On Despite Obstacles 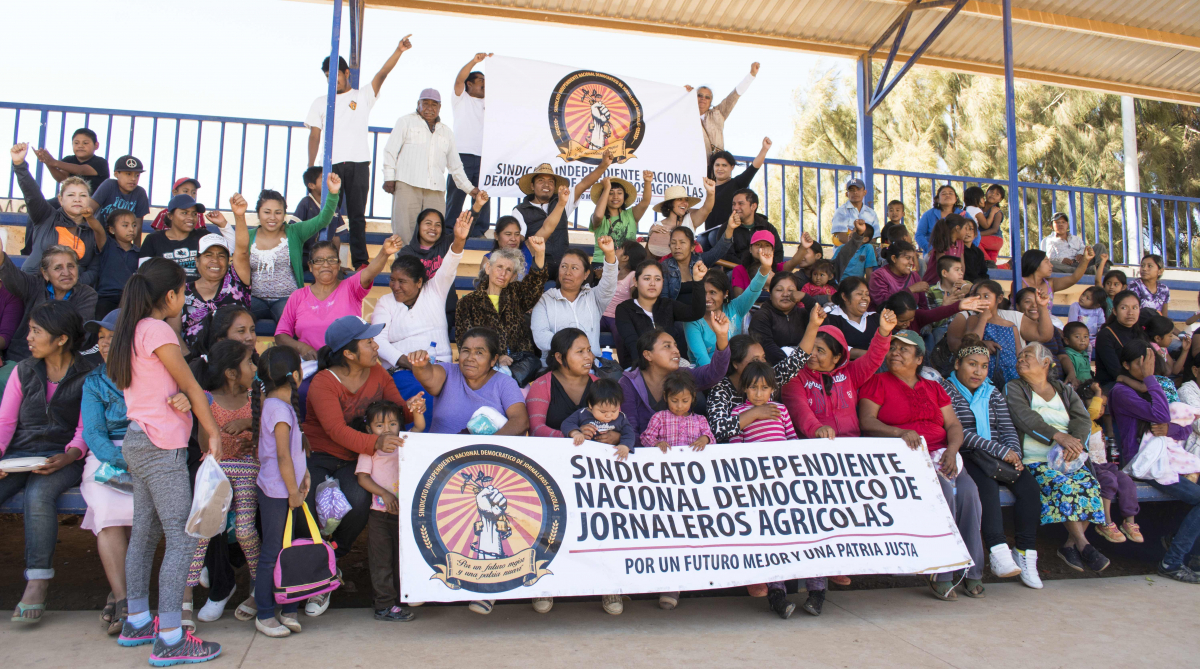 The National Independent Democratic Union of Agricultural Workers (SINDJA) is Mexico’s only federally-recognized independent farmworker union. Under the leadership of new general secretary Abelina Ramírez Ruiz and backed by recent labor reforms in Mexico, the union is aiming to win its first collective bargaining agreement.

In 2015, tens of thousands of poor, mostly indigenous migrant farmworkers (or jornaleros) went on strike in Mexico, blockading the transpeninsular highway that connects agricultural production in the valley of San Quintín, Baja California, with distributors across the border in the United States. These workers produce crops including tomatoes, cucumbers, and berries for U.S. and world markets—under conditions they decry as “modern slavery.”

The federal recognition of the National Independent Democratic Union of Agricultural Workers (Sindicato Independiente Nacional Democrático de Jornaleros Agrícolas, or SINDJA) was one of the few concrete achievements of negotiations between workers, growers, and state and federal governments.

The union—Mexico’s only independent farmworker union—has carried on in the years since, though it’s fighting an uphill battle. SINDJA has yet to achieve a collective bargaining agreement with the local growers and multinational corporations that operate in the valley.

This July, SINDJA elected a new executive committee, which could mark an important turning point for farmworkers in Mexico. Abelina Ramírez Ruiz, the new general secretary, began her involvement with the union by organizing around the multiple forms of violence suffered by migrant farmworker women. This includes issues of gender inequality, harassment, and sexual assault in the fields as well as domestic violence in the home.

Even as the migrant farmworker workforce becomes increasingly female, women continue to struggle to gain equality in both migrant and labor justice movements. Local social movements, community groups, and labor organizations have been largely male-dominated spaces where the voices of women are marginalized. The farmworker strike of 2015 was a watershed moment as female leaders emerged to challenge the gender hierarchies inherent in previous organizing efforts.

In another hopeful development, the Mexican government has agreed to work towards more transparent and democratic labor relations. Recent labor reforms stipulate that all collective bargaining agreements must be renegotiated by 2023 by means of democratic elections where workers decide their union representation. That’s thanks to reforms implemented by Mexico’s current president, Andrés Manuel López Obrador, as well as pressure by U.S.-based unions in negotiating important labor provisions into the United States-Mexico-Canada Agreement (USMCA), the successor to NAFTA. This could potentially offer unions like SINDJA a more favorable environment for organizing.

With company-controlled unions, workers normally do not pay dues. Instead, companies directly hire these unions to “represent” their workers. For example, Driscoll’s Mexican affiliate Berrymex employs the Regional Confederation of Mexican Workers (CROM) while Andrew & Williamson Fresh Produce affiliates (like Milagro de Baja) use the Revolutionary Confederation of Workers and Peasants (CROC).

Workers are largely unaware of their forced affiliation into these unions. When hired with formal contracts, union membership is written in fine print and few workers understand its significance. On the job, union representatives are almost nonexistent and largely ineffectual at solving complaints or grievances.

SINDJA is the only federally-recognized independent farm worker union in Mexico. The union argues that these company-controlled unions exist to thwart independent labor organizing which aims for greater workplace democracy and real worker representation. Transnational corporations complicit in the use of company-controlled charro unions look the other way. Meanwhile, many of these companies have implemented Corporate Social Responsibility programs that use third-party labeling organizations like Fair Trade USA and the Equitable Food Initiative to certify agricultural products as “fairly” and “equitably” produced—even as their labor practices fly in the face of the freedom of association clauses in the labels’ provisions.

In the face of enormous challenges, Mexico’s largely indigenous migrant farmworker movement has in hand an important tool for fundamental change—an independent and democratic farmworker union. Under the direction of Ramírez Ruiz, the new leadership aims to win its first collective bargaining agreement and continues its efforts to empower all farmworkers—men and women alike—through shop floor organizing, legal efforts, and education on workers’ rights. The next couple of years will determine whether national labor reforms, international cooperation, and local organizing will help the collective bargaining process and achieve concrete changes in the Mexican agro-export industry.

James Daria is an anthropology professor at Georgia College and State University.