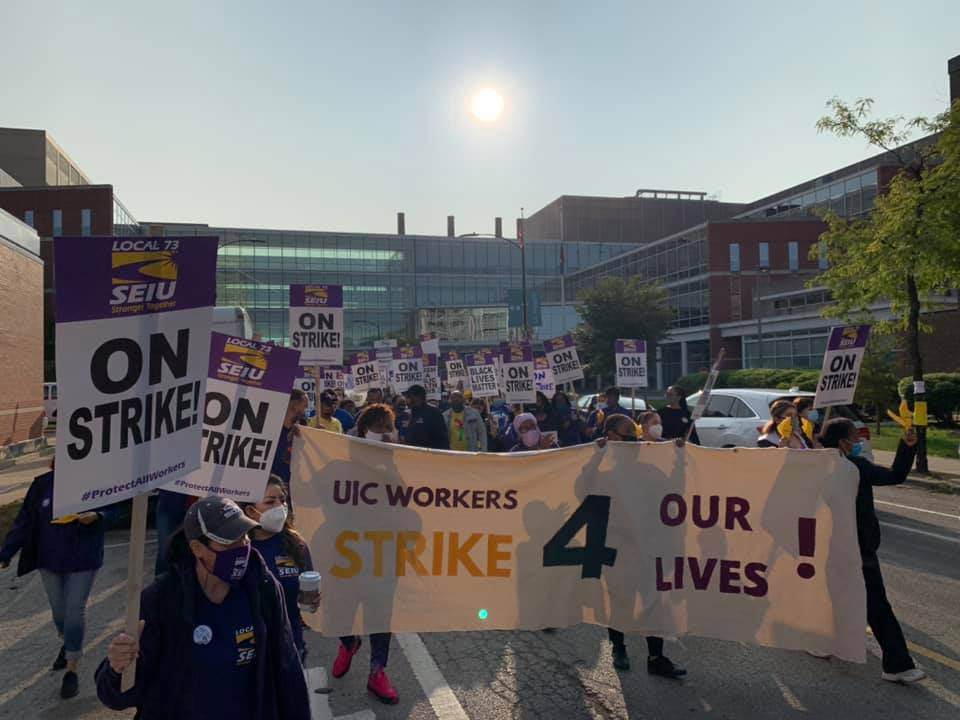 Nurses and other health care workers are striking the University of Illinois at Chicago for safe staffing, a $15 minimum wage, and guarantees of personal protective equipment. Photo: Matt Hoffmann

On Friday a Cook County judge filed a partial injunction against nearly 5,500 health care workers preparing to strike the University of Illinois at Chicago’s hospital, clinics, and other campus divisions. The judge cited a “clear and present danger” to patients, reducing the number of union members who could participate in the strike.

But to members of the Illinois Nurses Association and Service Employees Local 73, the clear and present dangers at UIC are unsafe staffing levels, lack of protective equipment, and poverty wages, especially in the coronavirus pandemic.

On Saturday, undeterred, the remaining 800 INA nurses went on strike, in the unit’s first walkout at UIC in 46 years. And on Monday, nearly 4,000 clerical, technical, building and maintenance, and professional workers in SEIU Local 73 joined them. The INA nurses are in their fifth day of a seven-day strike; Local 73 is in its third day of an indefinite strike.

“One of our primary issues is just chronic, chronic, chronic understaffing,” said Alicia Uwumarogie, a physical therapist in UIC’s outpatient care center and a member of the Local 73 bargaining committee. “We don’t have the staff to meet the needs of our patients.”

Local 73 is also demanding a $15 minimum wage at UIC facilities in and outside of Chicago, guarantees for personal protective equipment, and protection from discrimination and from using immigration status as a disciplinary tool.

“For everyone these are unprecedented times, these are stressful times,” said Uwumarogie, “but for those of us in health care it’s doubly or triply stressful. And so we are all being pushed beyond our limits.”

For the nurses, too, the major sticking point is understaffing, which the pandemic has exacerbated.

“They said [staffing ratios are] off the table. No discussion,” said Doris Carroll, INA president and formerly a nurse at UIC for 35 years. “This is the number one problem [for health care providers] across the country—across the world.”

Both unions are also demanding full access to personal protective equipment, after the deaths of members from COVID-19.

At the beginning of the pandemic, “[UIC] refused to protect nurses with PPE, at first because they said, ‘Don’t wear a mask, you’ll scare the patients,’” Carroll said. “We went to the media and the story came out that 12 of our nurses were infected [with COVID-19]. That night they allowed universal masking.”

“We had two of our nurses die, and a third gave it to her husband and he died. Four SEIU workers died,” Carroll said.

In response to the injunction and concerns about striking during the pandemic, Uwumarogie said she would agree that now is not the best time to strike.

“But the decision to strike in this time period was made by UIC. We have been at the bargaining table for over a year,” she said. “UIC chose to put us to the side and demonstrate how of little importance we are to them. They had no sense of urgency. So to make it urgent to them and to make it important to them, we decided to strike.”

Uwumarogie also noted that Illinois is currently in Phase Four, the next-to-last stage of the state’s reopening process, and is not experiencing a surge of COVID-19 cases: “The hospital has already ramped up to full operations. There are some departments where they’re not even able to maintain protocols for social distancing because we’ve ramped up so quickly. So to UIC it’s back to business as usual. So if they think it’s back to business as usual, this is an appropriate time for us to go on strike.”

Despite the injunction forcing some union members to cross the picket line, UIC also hired out-of-state strikebreakers from COVID hot spots. Chicago mandates travelers from such states to self-quarantine for 14 days, but because of a carve-out for essential workers, the scabs won’t have to.

University of Illinois Hospital & Clinics CEO Michael Zenn said the hospital is requiring workers from COVID-19 hot spots to get tested before beginning work and none has tested positive. Carroll believes otherwise.

“We found out today that two of their agency nurses tested positive for COVID,” she said.

This is the second strike in less than a year that Local 73 has timed to occur at the same time as another union’s strike. Last fall, 7,500 Chicago Public Schools support staff went on strike alongside the Chicago Teachers Union after working without a contract for a year, shuttering schools completely.

“It’s quite interesting for my first union job to already be in a position to have to go on strike,” said Uwumarogie. “But standing here in solidarity with all my colleagues from SEIU Local 73 and then to also be standing in solidarity with INA is just an amazing feeling. It’s empowering. It’s enriching.

“It honestly lifts my spirits because frankly, working here has demolished my spirits and it’s demolished the spirits of many of my colleagues. Letting each other know you are not alone is just restorative.”
Of Local 73’s decision to strike with the nurses, Carroll said, “We are in complete awe of them. These are workers who get paid less than $15 an hour… When both of the organizers [from each union] were talking we thought, ‘This is an awesome moment and maybe we can all get what we need.’”

This isn’t the first time unions at UIC have worked together. In 2018, after the Supreme Court’s Janus ruling against public sector unions’ ability to collect representation fees from non-members, UIC illegally failed to collect dues from hundreds of union members on campus. The fight revived a campus coalition of unions including the Graduate Employees Organization, the University of Illinois at Chicago United Faculty, SEIU Local 73, and INA, who held a joint action at university Labor Relations to protest.

Jeff Schuhrke, a UIC faculty union member and former co-president of GEO, said the Janus decision was an existential threat to unions at a public institution like UIC and is one major reason for increased union activity on campus. “Janus was definitely a moment where we thought, ‘We have to get serious now,” he said. “'We have to fight more.’”

Lillian Osborne is a union researcher in Chicago.