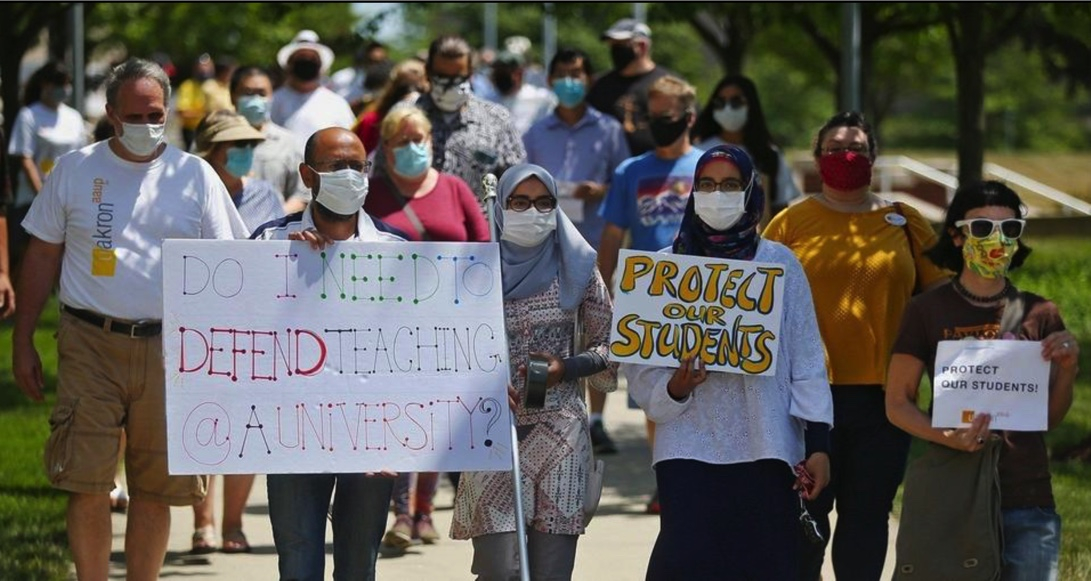 University of Akron administrators said the coronavirus gave them the right to lay off tenured faculty without regard to the contract. Professors voted no. Photo: Bill Rich

Faculty at the University of Akron (UA) voted down a proposed contract on August 5 by 184-159. The offer blatantly violated the faculty’s union contract on order of layoffs and would have declared open season on public university union contracts, in Ohio and nationwide.

On July 15 the Board of Trustees voted to lay off 178 workers—60 hourly staff, 21 non-faculty or administrative “contract professionals,” one law faculty member, and 96 of 518 bargaining unit faculty from Akron-AAUP, the university chapter of the American Association of University Professors. I am one of those “RIFfed” (reduced in force).

The AAUP layoffs paid no attention to rank or tenure status which would normally determine layoff order as outlined in the “retrenchment” article of our contract.

These proposed cuts came after a major buyout last year that saw about 40 people retire early. A number of older faculty also fell on their swords and retired early in order to save younger faculty's jobs. We were around 566 members last year. The board's proposal would have taken us to around 400.

At the beginning of 2020, Akron-AAUP and the UA administration began renegotiating our < href=https://drive.google.com/file/d/0B6exfQpdROe-MEd1bmdTakVNdW1LLUtUTXVRWlhQdEhJRTFF/view>current contract, which is set to expire December 31. UA is a public, urban research university with 19,218 students in fall 2019, down from a peak of 29,699 in 2011. It is known as a STEM-focused university with a strong undergraduate engineering program, world-class polymer research, and an athletics program that leads Ohio in cost per student.

Our negotiations focused on improving the language for our non-tenure-track colleagues, full-time faculty who do not have the job security granted by tenure. We also sought to standardize treatment of professors who added a child to their family and a host of small subjects like updating contract language so the same words were used consistently.

Negotiations were productive and swift; the teams reached a tentative agreement on non-economic language in March and we began to discuss benefits and salary. Benefits were supposed to stay the same and 2 percent annual raises were being discussed.

Then the coronavirus ended those negotiations.

It began with a pause. COVID changed everything and the administration had to redo its projections. During this time, the university rapidly reorganized, shuffling departments to consolidate 11 colleges into five.

In May, we learned that the administration intended to invoke Article 15, Section 12 of our contract—the “force majeure” clause in the retrenchment procedure. Force majeure is an unexpected and disastrous occurrence which creates exigent circumstances too rapidly for normal contract procedures. While Akron-AAUP believed this clause only allowed the administration to skip past the procedural stages of retrenchment—while still following seniority in determining layoffs—the administration’s interpretation was that force majeure meant there were now no rules for laying off faculty.

In this case “layoff” is a misnomer—when faculty are laid off, the position is permanently eliminated. In my case, there is no longer a Physical Sciences Librarian position.

The union’s counter-offers to heavily and temporarily cut salaries were heard and rejected; management claimed permanent faculty layoffs were needed and those faculty had to come at least partially from tenured ranks to achieve the desired reduction. Normal retrenchment order, they argued, would cut far more faculty positions because it would start with untenured and non-tenure-track faculty, who make lower salaries than those with tenure. Management would need to eliminate more jobs to save the same amount of money.

The administration also invoked Article 33, Section 3, which opens the contract to mid-term modification, again based on exigent circumstances. The administration claimed its only responsibility was to sit down with the union to discuss its intentions.

The union felt compelled to negotiate around the issues management presented due to the language in Article 33, including layoffs, because to do otherwise would offer the administration the freedom to impose instead of negotiate its plan. This was not by choice but rather to navigate a complicated legal scenario and ensure that if we went to arbitration, we could not be accused of being unreasonable or acting in bad faith.

The negotiating team examined and calmly responded to a slew of repulsive take-backs and cuts. They signed nondisclosure agreements, mostly to see the list of names so they could work to suggest alternatives that achieved the same savings. The nondisclosure agreements made it difficult for the bargainers to communicate to members what was happening at the table.

ON THE CHOPPING BLOCK

Eventually, bargainers were shown the layoff list. Bargaining then shifted to getting as many members off the list as possible, but in the end 96 bargaining unit faculty were slated for layoff without regard to tenure status or professorial rank (assistant, associate, full, distinguished)— the two main factors for layoff order under the contract. Some of the language from our pre-COVID regular negotiations was included.

Although the administration labeled the new contract a tentative agreement, Akron-AAUP considered it a last, best, and final offer pushed on us by the administration. We held the vote to strengthen our possible arbitration case and because our leaders believed that members should decide their fate.

Naturally our board of trustees, the product of three consecutive Republican gubernatorial terms, approved the proposed contract. The layoffs were originally meant to be immediate, but the effective date was changed to August 21 because some of the RIFfed faculty were teaching summer courses.

There was a short embargo on publicly releasing the list so those laid off could be notified individually. No one was given criteria for the layoffs; an FAQ sheet we received stated, “College and department level supervisors, in consultation with University leadership, made position elimination decisions based on business and academic need.”

After the embargo, the executive committee of Akron-AAUP met and unanimously recommended a no vote. The reasons are numerous and obvious: no criteria or rationale for the decisions, inability to independently verify financial evidence, devastation of programs, elimination of seniority and tenure, and lack of shared sacrifice.

The Departmental Liaison Council (department level contacts, similar to stewards) also voted to not recommend ratification. The liaisons noted that force majeure wasn’t applied evenly to others with the same contract language (such as athletics coaches); that the list had “a distressing number of international faculty, older faculty, women, and BIPOC” [Black, indigenous, people of color]; and finally that “academic freedom for both tenure and non-tenure line faculty nationwide and at the University of Akron are threatened if this unprecedented decision stands.” Tenure is supposed to protect faculty from the whims of the political cycle and allow them to challenge ideas and authority.

As the life-shattering news hit, we started to examine the RIF list. Those of us on it started calling it the “Hit List.” The Hit List has many faculty well known for being nettlesome truth-tellers. Labor Notes readers know the type—troublemakers. The list seems ageist, racist, xenophobic, misogynistic, ableist, and retaliatory; one colleague called it “a violent list.”

Akron-AAUP has filed a class action grievance on behalf of Hit List faculty. We have also filed two unfair labor practices against the administration for sending false and misleading information to members and for trying to renege on bargained aspects of the voted-down contract, such as saying RIFfed faculty would lose tuition benefits agreed to for their children attending the university.

Given these nasty details, readers may wonder, why would any faculty vote for this union-busting contract?

The list is designed to be divisive. In a usual retrenchment, the newest faculty, especially non-tenure track faculty, are first to be let go. But very few new non-tenure track faculty were on the Hit List. Now that the contract has been voted down, they are afraid of getting laid off instead. Here, like so many unions, we are paying the steep price for a two-tier contract.

Also, Hit List faculty were offered $1,200 per year of service (maximum $12,000) in severance if we signed a waiver promising not to sue the university—but only if the contract were ratified. Many of my faculty colleagues are typical Americans in that they are just staying afloat on their bills. Some will have to declare personal bankruptcy; faculty jobs often take over a year to find and usually involve moving out of state. Voting no seemed like economic suicide for some.

The list worked as designed: it split us. Non-tenure-track faculty formed a discussion group to talk about how they were not being represented. One faculty member who would still have a job went on social media to call us “dead wood” and encourage everyone to move on. The president of the faculty senate encouraged a yes vote in an email.

It seems clear that for the administration, saving money was not the only desired outcome. For example, enrollment is no longer projected to fall 20 percent as predicted earlier, but no names came off the list. UA leadership has publicly stated they are “over-invested” in academics, and this feels like a corrective action.

It’s three weeks till school starts. Some Hit List faculty expect to be offered adjunct positions at a quarter (at best) of their previous salary. Most teaching faculty will be teaching an additional course this fall, but many courses that were scheduled for laid off-faculty do not have new instructors.

What the hell happened at the University of Akron? A conservative board of trustees decided to run things like a business and try to bust a union, using the coronavirus as a tool. The sycophants and bootlickers they lined up in administration leadership roles obliged them because they were allowed to get rid of anyone they didn’t like without providing any rationale.

The administration still intends to move forward with the layoffs, even though the contract was voted down. They have rescinded the mid-term modification request and everything is riding on the force majeure clause. Akron-AAUP has submitted the grievance on which our jobs now hang and it will be decided by binding arbitration. Opening briefs will be filed August 21 and the arbitrator is scheduled to deliver a decision on September 18.

in addition, although we are not back at the table, union bargainers have started thinking about ways to save money without a mass layoff. The administration no longer wants mid-term modifications to the contract, but we are always hopeful a deal can be reached. Our current contract ends December 31 and we expect to be back at the table to bargain the next contract soon.

In lessons learned, the nondisclosure agreements that the bargaining team agreed to caused many communication problems and did not deliver anything worth that sacrifice. Finally, we are organizing, to learn what members want, to heal the wounds, and to be prepared for whatever comes next.

Ian McCullough is a departmental liaison for University Libraries and a Liaison-at-Large member of the Akron-AAUP executive committee.