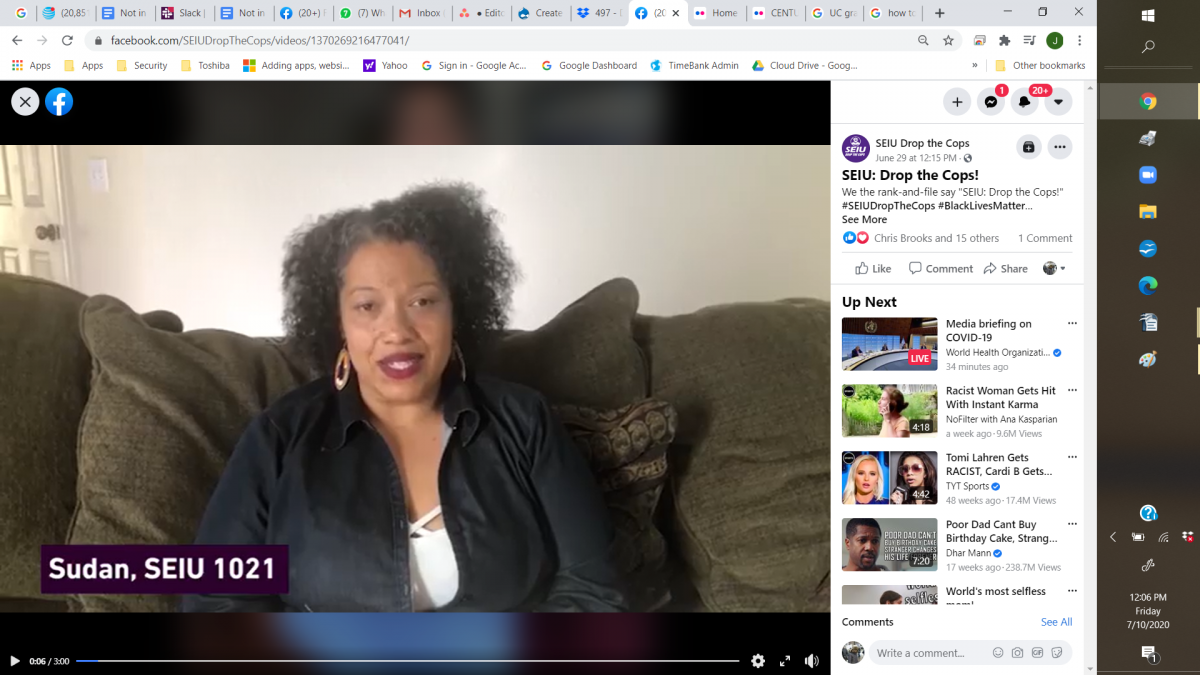 Service Employees members are organizing to get their national union to "drop the cops"--expel police locals. Video: SEIU Drop the Cops.

As calls to defund the police rise across the country, many of us are taking stock of our own association with police through our common membership in unions. We’re coming to see the police as a direct threat to us as union members, and we're also frustrated with the ways that too many police exploit the strengths of collective bargaining to avoid punishment for racist actions.

Service Employees (SEIU) members remember when police attacked Justice for Janitors members on a Los Angeles picket line 30 years ago. We’ve watched in horror as police have gassed and beaten demonstrators standing up for Black lives. This is on top of their regular harassment of Black and Brown members of our communities and our unions.

And while most police unions are unaffiliated with national unions, some of our biggest unions do include police locals. Rayshard Brooks, one of the most recent in a seemingly endless series of Black people murdered by police, was killed by an Atlanta officer represented by SEIU and the National Association of Government Employees.

Those of us who are SEIU members have found ourselves facing an internal conflict that we cannot ignore—and many of us are ready to stop protecting members who directly harm us.

WHOSE BUDGET WILL BE CUT?

This conflict arises in another material way. Many public sector SEIU members are hearing about budget cuts and impending layoffs because of the pandemic and its accompanying financial crisis. Those of us in social services, health care, and city and county jobs that protect and nurture the common good are once again the first to be threatened when the economy goes bad, while police budgets, drawn from the same small pot of public money, only seem to grow.

And as these austerity threats increase, we know who will be called on to evict us from our homes, or to confront us physically on the picket line. Law enforcement officers are not our union brothers and sisters; they are enforcers of our oppression. Black, Brown, and Native people, trans and queer people, women, youth, and people with disabilities have all been targeted.

As unionists, one tool we have is disaffiliation of police unions.

As the tide began to rise in the struggle against police violence this year, a few people in SEIU started a simple petition to demand SEIU expel its police unions. We’ve forwarded the petition mostly through texts and messages between union siblings and co-workers.

Next, we launched a WhatsApp group. WhatsApp is a platform that allows fast communication in a large group, and we are rapidly adding members who share ideas there.

We meet weekly via Zoom with a rotating facilitator and a note-taker. We started a shared drive on Google where we can keep our notes and documents.

Our next step was a video. Several of us shot selfie videos explaining why we believed SEIU should disaffiliate its police unions. A generous volunteer edited these videos together.

Disaffiliating police unions is not a simple issue for SEIU, where we have both police and many civilian workers such as jailers, parole officers, and administrative and support workers in police and sheriff’s departments.

At our meetings, we’ve had hard conversations. We’ve heard from those who are worried about harming fellow union members who are connected with the police, and who point to the pledge that elected SEIU officers take not to harm other members. We’ve also heard calls for us to help reform the police from within the same union, and to focus on driving violent, abusive, and racist individuals out of the system.

These conversations are ongoing, and we recognize that clarifying our shared demands is important and urgent. But we have agreed to move forward with a campaign to disaffiliate from our ranks all sworn police officers who have the ability to use deadly force—“cops out of SEIU”—and to support a just transition for those who want to leave the police and the creation of good jobs that nurture our communities instead of causing harm.

In a recent interview in In These Times, SEIU President Mary Kay Henry said: “I think it’s critical that we have tough conversations and we engage on the hard issues, and that if we can’t get that to occur, I understand that expulsion is an option that has to be considered.”

This is the moment for us as rank-and-file members to make clear that the priorities of our union should be the well-being of our fellow members and our common humanity, and that SEIU must make a tangible commitment to anti-racism by fighting to defund the police and expel police affiliates.

The authors are rank-and-file members of SEIU in California. Email SEIUDropTheCops[at]gmail[dot]com.

Related
Chicago Passes Union-Backed Bill for Civilian Oversight of Violent Cops »
Review: White Workers Who Buy into Racism Are Shooting Themselves (and Everyone Else) in the Foot »
'We Took Care of Each Other': A Maritime Union's Hidden History of Gay-Straight and Interracial Solidarity »
The National Guard Came to St. Paul to Repress Protests. We Kicked Them Out of Labor’s Hall. »
Global Cleaning Workers Share Their Struggles as the First Line of Pandemic Defense »

I'm afraid I have to disagree with Brother Jay from BC. Policing in the United States, and to a lesser degree Canada, is fundamentally oppressive and racist and cannot be "trained" to be any other way. The vast majority of police departments already have training requirements, including diversity awareness trainings. This is true of the majority of police departments that have murdered unarmed and compliant People of Color. Security patrols and billy clubs, used to terrorize Irish Workers seeking to organize and for independence from England, were ideas imported to the US and married to vigilante slave patrols used to hunt down, capture and abuse Black slaves to create our current police departments. Police have always been on the side of property and corporate capitalism, never on the side of people, and absolutely never on the side of People of Color or Workers or LGBTQIA+ folk or people with disabilities, all of whom have been specifically targeted, both historically and currently, for abuse and murder by police. The police system and the criminal justice system and the incarceration system are not broken. They are all working exactly as intended to oppress, terrorize, disenfranchise, abuse and murder the Working Class and especially Workers of Color. We absolutely need to defund the police, beginning with their heavily militarized budget portion, and distribute that money to community groups to provide support to schools, Social services, especially Mental health services, mentorship, after school activities, affordable housing and healthcare, etc. as determined by the community members. I would ask Brother Jay to please investigate any interaction between his co-workers n Union Members with the police and how the Workers and Members or treated in these interactions and see if that informs his opinion about training or defunding or unaffiliation with police associations, which operate as unions in name only. Thank you All for your time and consideration.