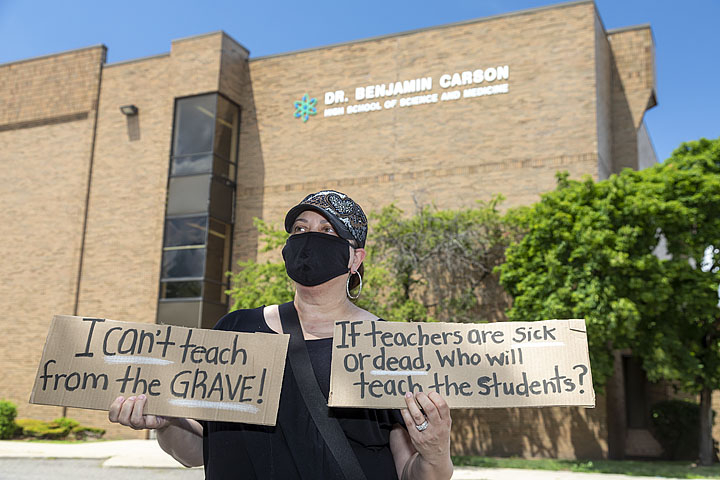 “The numbers need to be down,” said Andrea Thompson, a college advisor for Detroit public schools. “Right now it's a spike.” New daily coronavirus cases in Michigan were at 74 on June 15 but by July 15 had surged to 891.

As August approaches, teachers across the country are debating whether it's safe to return to their classrooms.

The Los Angeles teachers union (UTLA) says, “When politicians exhort educators and other workers to 'reignite the economy,' UTLA educators ask: who are you planning to use as kindling?” Teachers unions in Florida sued their governor over his push to reopen next month as COVID cases there rise.

Jason Patton, a math teacher and 24-year educator, read the group's list of demands outside Benjamin Carson High School in Detroit, to be met before teachers will return for face-to-face instruction:

“Detroit was a hotbed. African Americans are more susceptible to losing their lives from COVID,” said Patton, who is Black. “We want to be back with our children. But we're not willing to be put at risk for someone's political agenda.

“Our children are not your guinea pigs. This is not Tuskegee,” said Patton—referring to the infamous 1932-1972 research project that studied what would happen if Black men were left untreated for syphilis.

The organizers of the caravan were from the Michigan Caucus of Rank-and-file Educators (MICORE), which includes school staff from different districts and unions in metro Detroit, and a new group, MUSCLE: Michigan United Stakeholders and Community for Learning Equity. Some MUSCLE leaders had led sickouts and other actions in 2015 to call attention to conditions in Detroit schools.

One MUSCLE leader, Vanessa Dawson, who teaches sixth grade at Paul Robeson Malcolm X Academy, said the Detroit Federation of Teachers says it's behind their demands. “But they don't get out in front. They don't say it to the media,” Dawson said. DFT members have “no clue” what is happening with their contract, which expired June 30 and is now being bargained.

Melissa Redman is a parent at the Academy. She noted the COVID deaths at the school: a teacher, parents, the principal's mother. “You can't go to church, you can't go to a movie theater,” Redman said. “[Detroit Schools Superintendent] Nikolai Vitti is holding his board meetings via Zoom. What makes him think it's safe to send kids to school?”

Rob Doyle is a choral director in the Dearborn schools just west of Detroit. He said decisions keep changing and that parents are as confused as teachers. He thinks some parents will keep their children out of schools even if the city reopens them.

Asked why the district might push to reopen, Doyle said, “I don't want to go all 'profits over people.' But if they were really going to mitigate the problems, it's going to be expensive.”

Signs on the caravaners' car windows read “People Over Politics” and “I can't teach from the grave.”

Related
Communications Workers Fight Telecom Giant for MLK Day Off »
Bay Area Transit Unions Join Forces to Win Safety Protections and Beat Back Layoffs »
How to Keep On Keeping On »
Viewpoint: Health Care Workers Must Speak Out as Covid Spreads in Prisons »
2020 in Review: Workers Struggle Under the Weight of the Pandemic »