The Worker Mini-Revolts of the 21st Century 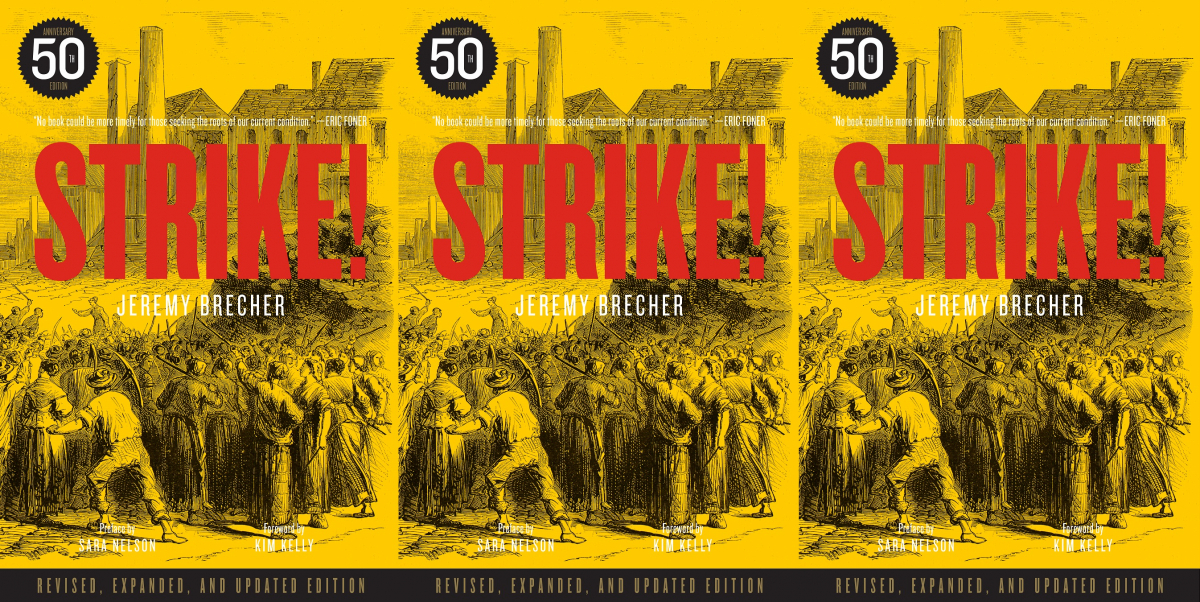 "Strike! grew out of my discovery of the hidden history of the American working class," writes labor historian Jeremy Brecher in this excerpt from the new, updated 50th-anniversary edition of his classic book.

This is an excerpt from the forthcoming revised and expanded 50th anniversary edition of Strike! by Jeremy Brecher, PM Press, June 2020. The publisher is raising funds on Kickstarter to bring the book to new audiences; give here. Also, today at 4 p.m. Eastern, tune in to a special online event with Jeremy Brecher, “Mass Strikes: Yesterday, Today, and Tomorrow”; details here. –Eds.

In the decade that followed the Great Recession of 2008, inequality and the concentration of wealth became so extreme that, according to a 2017 Oxfam study, eight individuals together owned as much wealth as half the human race. The wealthiest three billionaires in the U.S. had as much wealth as the bottom half of the U.S. population combined. Meanwhile, a 2018 study by the Federal Reserve Board found that 4 in 10 Americans did not have the money to meet an unexpected expense of $400.

The effects of the Great Recession have persisted more than a decade. The crisis of globalization and neoliberalism has led to highly destructive forms of economic nationalism and trade wars—not to mention hot wars over control of resources, governments, and territory.

To launch the book, today at 4 p.m. Eastern, tune in to a special online event with Jeremy Brecher, “Mass Strikes: Yesterday, Today, and Tomorrow." Details here.

Authoritarian right-wing parties and political movements in the U.S. and around the world have undermined basic legal and normative safeguards of democracy while weakening the rights of workers and the power of their organizations. Using classic divide-and-rule strategy they have played racial, ethnic, gender, nationality, and other groups off against each other.

Now on top of that, the historic coronavirus pandemic and follow-on economic catastrophe are generating impoverishment and death for workers. The weakening of democratic institutions has led to a daily erosion of worker power and a continuing threat of irreversible tyranny.

Environmental threats, above all climate change, have caused cascading local and global disasters and threatened the future of humanity. These threats have affected everyone, but those with the least wealth and power were often devastated first and most severely.

The established strategies of workers and their organizations have generally failed to deal with these problems. The proportion of workers represented by unions has continued to decline. Except for the teachers strikes for public education, strikes have remained at historic lows.

In 2016 there were eight private sector strikes with over 1,000 workers; in 2017 four; in 2018 nine; in the first half of 2019 three. (For comparison, in 1952 there were 470 strikes with more than 1,000 or more participants, almost all in the private sector—about 50 times as many as 2018.) In 2018 only 28,000 private sector employees struck or were locked out. Laws like the Wisconsin restrictions of public sector bargaining rights and rulings like the Supreme Court’s Janus decision increasingly hemmed in workers’ freedom to act collectively.

But from the failure of old strategies comes the search for new ones. In periods of defeat, demoralization, and suffering, people engage in experiments that may fail, but that also serve as the basis for learning, drawing conclusions, and formulating new strategies. In them the seeds of movements yet to come can sometime be discerned.

So a search began for new solutions. The movements for public education, spearheaded by the teachers strikes, provide the most vivid—and successful—example. In this excerpt we highlight other recent actions that may be harbingers of new approaches that may help solve the problems of working people.

The Women’s March on Washington, held the day after Donald Trump’s inauguration as President, was the largest protest demonstration in American history. An upwelling of direct action followed the election of Donald Trump that came to be known as the Resistance. The Poor People’s Campaign, echoing the historic movement initiated by Dr. Martin Luther King, Jr., half a century before, brought together people of color, environmentalists, labor unions, and many other constituencies around an integrated program for coordinated weekly civil disobedience actions around the country.

The student walkouts and March for Our Lives for gun control organized by survivors of the Parkland, Florida, school massacre constituted the largest youth protests since the Vietnam War era. Despite the obstacles presented by a repressive environment, prisoners organized a nationally coordinated prison strike for justice and more humane conditions. After 35 days of federal government shutdown, a sick-out by airline workers forced President Trump to reopen the government and the threat of a general strike helped forestall him from shutting it down again. A general strike and two-week nonviolent popular uprising forced the governor of Puerto Rico to resign. In September 2019, a weekly global Student Strike for Climate was joined by millions of adults worldwide—and foreshadowed how mass worker action might give power to a global movement to protect the climate.

Each of these actions shows a different aspect of “people power” and how working people can respond to the emerging problems and conditions of the 21st century. While none of them were conventional strikes, all of them involved a withdrawal of participation in and/or a disruption of normal, everyday activities. Like the mass strikes of the past, they have emerged through many experiments in workplaces, communities, social networks, and other venues. They have constructed new organizations and new hypotheses to test in action. They may foreshadow mass strikes to come.

HISTORY AND THE FUTURE

In the first, 1972 edition of Strike! I wrote, “I started work on this book in response to problems in my own life—problems most of us share.” The threat of “nuclear and ecological disaster,” combined with the more traditional effects of economic, social, and military crisis, meant that humanity—if it survives at all—would do so “only through fundamental changes of its way of life.” And even if we escaped such catastrophe, “we would probably have to spend our lives tied to jobs we found onerous, boring, and stunting”; working “not for ourselves but for someone else”; doing work which, far from meeting real needs, would likely be useless if not positively harmful; wasting our lives away “angry, frustrated, and unable to do much of anything about it.”

Most people felt powerless to affect such matters. Indeed, Strike! asserted that “the greatest problem we face today is our powerlessness.” It underlay the particular problems we faced: “war, pollution, racism, brutality, injustice, insecurity, and the feeling of being trapped, our lives wasting away, pushed around by forces beyond our control.”

Strike! grew out of my discovery of the hidden history of the American working class. It aimed to lift the “‘iron curtain’ between the people and their past.” It revealed that “ordinary working people” throughout the decades have “thought, planned, drawn lessons from their own experiences, organized themselves, and taken action in common.” They thus developed a “new form of power, directing their own action cooperatively toward common purposes.” I hoped that by telling that story I could help working people rediscover the capacities revealed in mass strikes and help build a bridge between them and other social movements addressing contemporary problems.

Working people today are engaged in diverse experiments to develop new responses to the new problems and new social, economic, and political contexts they face. As the Fight for 15, the teachers strikes, and the climate strikes indicate, workplace self-organization and mass strikes are likely to be part of those responses—but in forms that may be very different from those of the past. Whatever form our action takes, however, it is only by forging solidarity with each other, withdrawing our cooperation from those who now dominate us, and taking control of our own activity in our own collective interest that we will be able to provide for our own common preservation.

Jeremy Brecher is a historian and the author of the labor history classic Strike!, first published in 1972.

Related
Collectively Fabulous »
Labor Notes Conference 2022: It’s Gonna Be Big »
A Life in Transit: ‘What You Can Get Is Set by How Far You Are Prepared to Go’ »
When Workers Swapped Segregation for Solidarity »
Trouble in the Tulips: Organized Farmworkers Win Basic Demands in a Quick Strike »