How Postal Workers Are Organizing Ourselves During the Crisis 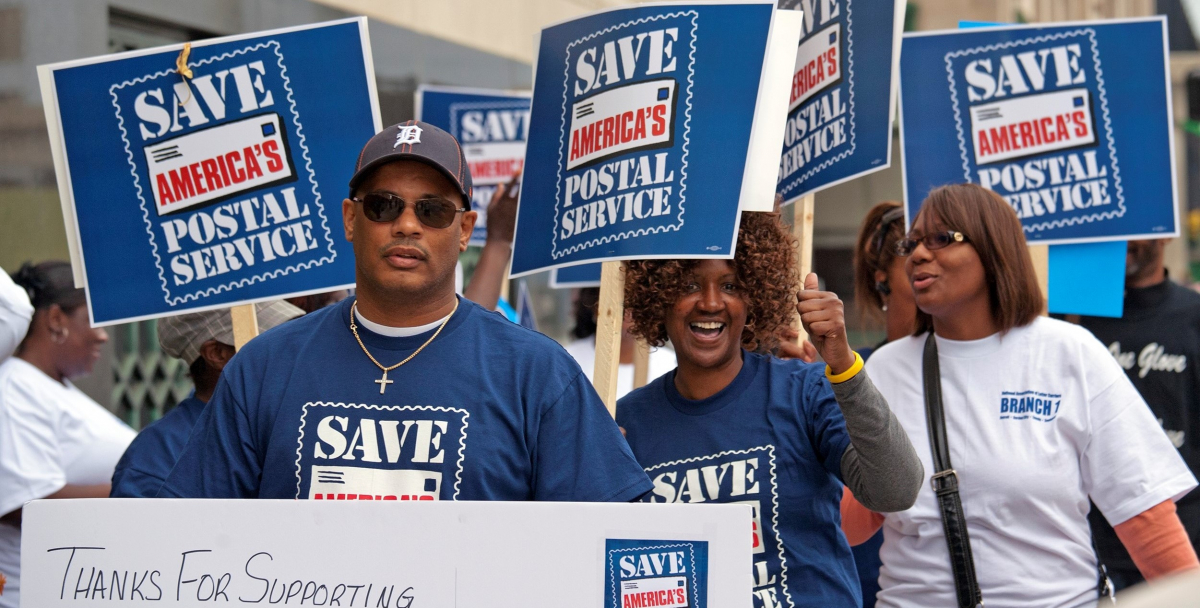 Postal workers have long fought to maintain postal services and stop privatization, and they are doing so now. Photo: Jim West, jimwestphoto.com.

Postal Service management has failed tremendously in handling the coronavirus pandemic. For weeks after it was clearly a public emergency, there was essentially no response at all from management. Some safety talks about personal precautions were distributed to supervisors, though from what I can tell, they were never read in most places.

An agreement was signed with the Postal Workers (APWU), one of the four postal unions, that gloves, sanitizer, and masks would be provided at all stations, but none of these were available at virtually any station for weeks afterward (masks still aren’t).

With the partial exception of the APWU, top leaders in the unions were either doing very little or not communicating what they were doing to members. (In the time since we started our petition, below, the postal unions did get the Postal Service (USPS) to add 80 hours of sick leave for lower-tier workers who didn't have any, and to allow employees to use their own earned leave to stay home with kids who were out of school. But this was still far short of what was needed on the job.) 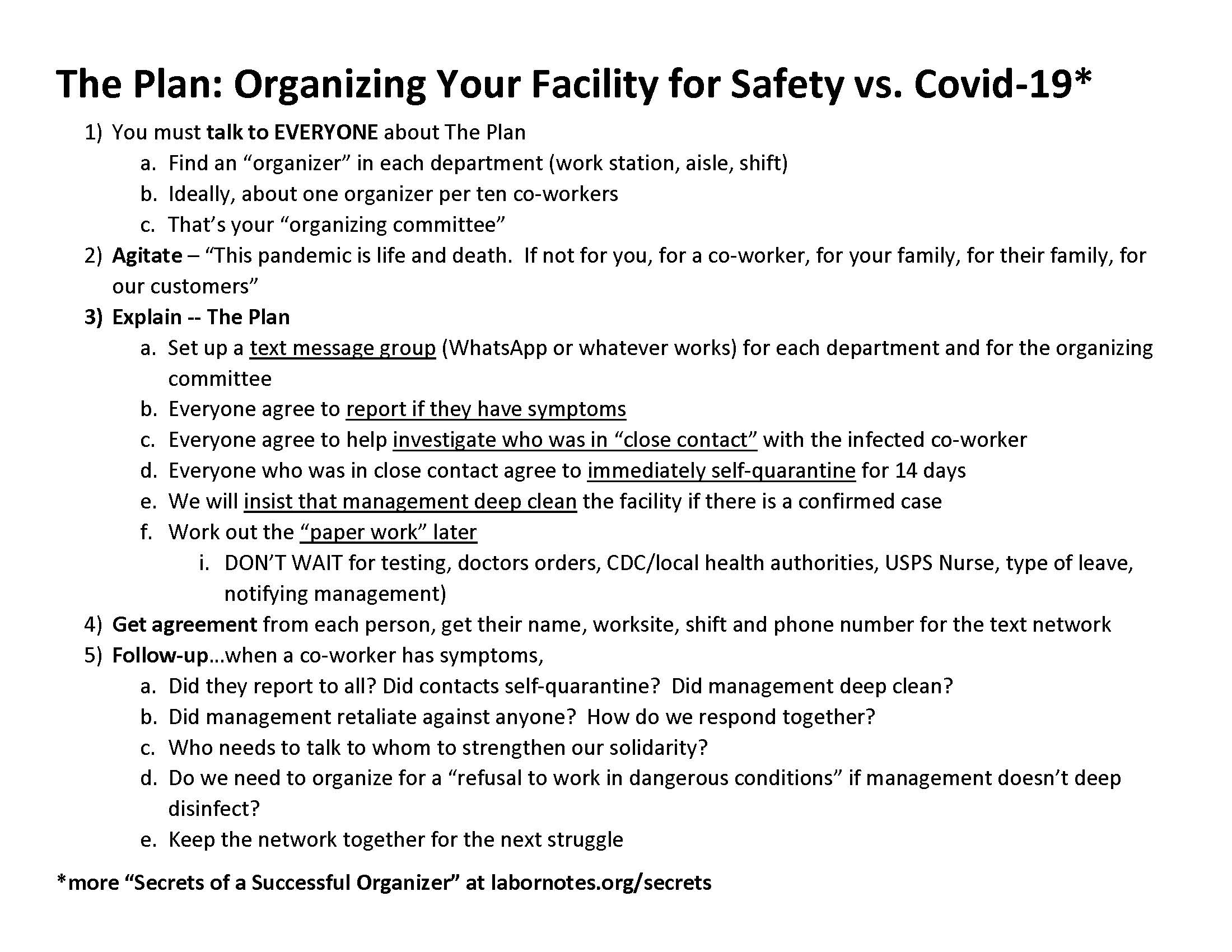 Postal workers recognized that this was going to be disaster, and many understood that we needed to act on our own behalf. I talked to some sympathetic co-workers and started a petition demanding safety precautions, administrative leave with full pay for anyone at high risk, hazard pay, and more, hoping to use it regionally to identify other rank and filers willing to act. The petition got tens of thousands of signatures the first day (it’s now up to around 90,000), more than half of them from postal workers.

Recognizing an opportunity for more than local organizing, I reached out to some other rank-and-file troublemakers and to Labor Notes staff. Using the email list of petition signers, we organized a series of weekly phone calls which have had between 100 and 200 people on each and a Facebook group for postal workers that has more than 18,000 members. We've pushed organizing on three fronts:

Demands on top postal management for administrative leave (paid leave where we don’t have to use up our sick or vacation hours), hazard pay, and enforcement of safety protocols. We are pressing our union leaders to mobilize all the members together, to move the USPS and Congress. We put out a sign-on letter for elected union officials (shop steward on up) which in its first two days garnered over 100 signatures from officers, including 10 local presidents.

Congressional action. With revenue declining for the Post Office, a recession sure to last years, and large-scale stimulus legislation moving rapidly through Congress—all with a President hostile to the Postal Service—this is likely to be a decisive moment in our long-term fight against privatization of USPS.

The most recent stimulus package at one point included $25 billion for USPS, but nearly all of it was removed in the final version. We need legislation that funds the post office, removes the absurd requirement for prefunding of benefits which has accounted for almost all of our losses over the past decade, and expands services.

To win this we need to mobilize public support around a vision of the Post Office as a public good.

Alex Fields is a rural letter carrier in Knoxville, Tennessee.

Related
Detroit Postal Workers Push to Dump DeJoy and His Ten-Year Plan »
The Postmaster General’s New Attack on the Mail is a Fig Leaf for Privatization »
Can Postal Vehicles Help Us Fight Climate Change? »
Pandemic Discrimination Against Asian Americans Has Long Roots »
Catching Covid-19 at a Covid-19 Vaccine Production Facility »

I BEG TO DIFFER. THE NATIONAL POSTAL MAIL HANDLERS UNION (NPMHU) HAS BEEN INVOLVED, SUPPORTING THE MEMBERS, AND PRESSURING THE SERVICE SINCE THE END OF FEBRUARY. WE BEGAN ADVISING OUR MEMBERS ABOUT THE VIRUS ON FEBRUARY 29, 202 ( AS PER NPMHU.ORG).