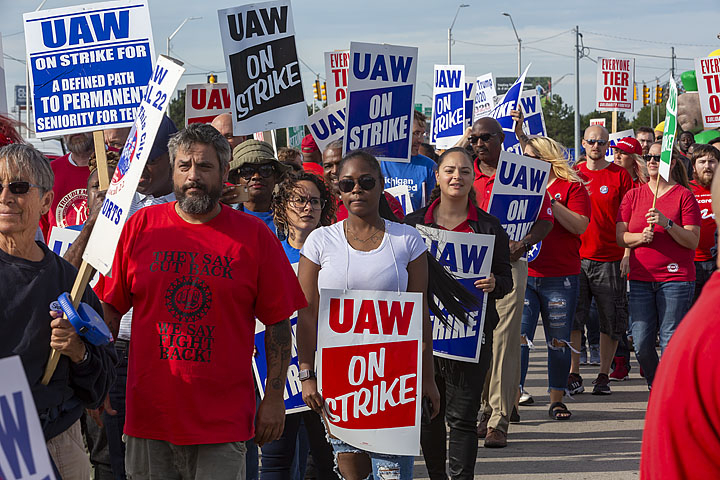 This is Day 23 for the United Auto Workers' strike vs. GM and three large issues remain unresolved.

This is Day 23 for the United Auto Workers' strike vs. GM. Today’s Detroit Free Press says at least three items have not been resolved:

1. How long it takes “in-progression” workers (the second tier) to move up to their top level. It's currently eight years to move from $17 an hour to $28—and their ceiling still has a lower wage and benefit package than those who were hired before 2007.

2.What to do about the temps, who are paid $15-$19 an hour for the same work and often work as temps for years.

3. How to have apprenticeships for skilled trades when GM has lumped many trades together under one generic classification.

At least the first two of these are key issues for the strikers (along with not paying more for their health insurance). The union has said it wants a “path” to permanent status for the temps—to ease them in over time. A recent offer from GM was to make a temp permanent after three years of uninterrupted service—a laughable proposal, as temps are laid off often.

On the line, strikers say “hiring the temps” and “equal pay for everyone” is their first priority. Will a “path” satisfy the strikers, who really want to equalize wages and benefits? And will the UAW allow GM to keep hiring more temps?

The parties are also negotiating what to do with the GM-UAW training center. When these joint training centers were set up at each of the Big 3 after the economic crisis of 1979-81, they were designed as partnerships between union and management, tasked with finding ways for workers to aid the employer.

They were also a source of massive corruption, as union officials were able to appoint members to make-work and no-show staff positions at the centers and thereby increase their army of “yes” people. Union officials and staff used training center credit cards to pay for luxury goods, parties, and routine union expenses. Since the training centers were set up as independent non-profits, neither the union nor the company had to report the expenses on their filings with the federal government or investors. Many of the UAW officials recently indicted have been involved in these training centers.

According to the Free Press, GM wants to shut its joint training center down. That’s great—“jointness” has always been a cancer. But what will UAW members receive in return? Workers’ money, particularly when working overtime, has been diverted to pay for the center.

Much remains to be ironed out. GM rejected the contract package the UAW presented last Saturday; currently UAW officials are considering the GM proposal made yesterday. The strike has cost GM as much as a billion dollars so far by some estimates, and some plants in Canada and Mexico have been shut down or partially shut as a result of the work stoppage.

GM is playing hardball, believing that losses in 2019 will be more than made up for over the years if it can revamp its wage structure. At the same time, UAW negotiators know that the strikers feel strongly that they need to stay out until they get a decent contract. Officials don’t want to have workers voting down a tentative agreement as Chrysler workers did in 2015, and given the level of corruption among top leaders, they don’t have as much authority as they once did.

Vance Pearson, director of Region 5, who has been indicted on corruption charges including conspiracy, was finally placed on leave last week. President Gary Jones, who is being investigated by the FBI, has been absent from the bargaining. In fact, the UAW vice presidents in charge of the Ford and Chrysler departments have said they don’t want him around.

If there’s a picket line near you, show up! Bring a friend, or a whole carpool.

Maybe bring some refreshments. Pick up a sign, join in the chanting, and walk the line for a couple hours.

One final note about “job security,” which has never been won. The UAW always bargains for it, and in each contract proudly announces a clause banning plant closures and GM’s willingness to invest in U.S. plants. In reality the corporation does what it wants. During the 2015-19 contract it “unallocated” rather than “closed” five North American plants.

Meanwhile, UAW leaders see the handwriting on the wall for the internal combustion engine—but have not embraced electric vehicles (EVs). The union's white paper, “Taking the High Road: Strategies for a Fair EV Future," quotes Ford Motor Co. as saying that electrics will use 30 percent fewer labor hours per vehicle than traditional vehicles. As the companies switch to EVs, workers making engines, transmissions, exhaust systems, and fuel systems will be decimated.

Electric buses and trucks should have been prioritized a decade ago when the federal government was bailing GM out, as proposed by the Autoworker Caravan. The UAW should have demanded then that the government use its ownership of GM to convert the plants to green production.

It's incredibly short-sighted that the UAW concludes it’s just not interested in electric vehicles. Neither is its counterpart in Canada, Unifor. Workers, retirees, and the community around GM's plant in Oshawa, Ontario, however, have put together a bold feasibility study that offers a way forward to build green manufacturing under public ownership.

Dianne Feeley is a retired auto worker in UAW Local 22 in Detroit.